Amma left the Ashram early this morning for New York, America. Amma will deliver an address at the Interfaith Center of New York (ICNY) on intra-religious understanding and collaboration, especially in relation to her experiences in the wake of the 2004 Asian tsunami.

ICNY is a secular non-profit educational organization with the goal of creating understanding and respect among different religious groups. It was founded by the Very Reverend James Parks Morton shortly after his retirement from the post of Dean of the Cathedral of St. John the Divine, the Seat of the Episcopal Diocese of New York, in 1997. Reverend Morton has been ICNY’s president ever since.

Amma will deliver the speech on May 2nd at the Rubin Museum of Art in Manhattan. 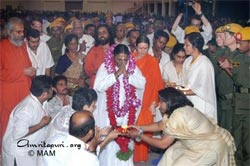 Amma’s Malaysia programs were held on April 22-23 at the Mines International Exhibition & Convention Center in Kuala Lumpur, Malaysia. Over 50,000 people attended the two days of programs. As Amma entered the hall for the first evening program, she was greeted by a troupe of traditional Chinese Lion dancers.

The first program ended at 11am the next morning. Over 27,000 people received darshan.

Just prior to the start of the second evening programs, heavy rains fell. A huge rainbow stretched across the sky minutes before Amma’s car drove up to the entrance. The last evening programme ended at 8.a.m the next morning.

Thus ended almost three months of continuous travel which started back on Feb. 3rd in Thalassery on the North Indian Tour. This was one of the longest stretches of time Amma has been away from the Ashram. 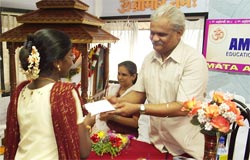 On 23 April, Amma’s ashram (MAM) in Navi Mumbai started a program called “Amrita Tava Sevanam.” Through the program, the Ashram has extended free computer training to 12 youths from Dharavi, a Mumbai slum. They will be educated at the Amrita Institute of Computer Technology (AICT) located on the grounds of the Navi Mumbai ashram.

The Ashram also distributed school bags and raincoats to 51 underprivileged students from Dharavi.

Panduranga R. Pawar, the chief educational officer of the Navi Mumbai Municipal Corporation, addressed the gathering. After lauding the social and humanitarian activities of the Ashram, he said, “Those students availing assistance from the Ashram should do their studies well, and upon settling in their life, they should also support other children who need educational help.” 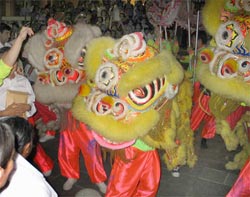 Amma’s Singapore programs were held on April 18 – 20 at the Teo Chew Building in Singapore.

On the first night, Mr. Ravindran, Member of Parliament, Marine Parade GRC, garlanded Amma and addressed the gathered crowd. “It is indeed a privilege to have Amma here with us, who has made all these [charitable activities] possible all over the world and will continue to share a message of love, humility, and care for each and everyone on earth,” he said. Also present was Senator Jamby from the Philippines.

The next morning, students from Amrita Balachandra School performed for Amma during her darshan.

On the second night of programs, Amma was greeted outside the hall by traditional Chinese Lion dancers who performed to the delight of Amma and all those present. 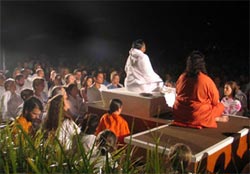 The second and final retreat of Amma’s 2006 tour of Australia took place on the shore of the aptly named Gold Coast. The cool sea breeze, the golden textured sands and the sound of the waves breaking upon them all provided a soothing environment for the three-day getaway. People from all over the country took advantage of the long Easter weekend to be in the presence of a living spiritual master.

As the first night of the retreat took place on Good Friday, in her evening satsang Amma spoke about Christ’s crucifixion. Amma explained how visually the cross is very similar to a crossed-out letter “I” and that, in fact, this is what the crucifixion represents—the surrendering and destruction of the ego, the sense of “I” and “mine.”

On the second evening of the retreat—which began with a meditation—Amma decided to walk the 10-minute trip from the retreat accommodation to the program venue. It was a beautiful sight—the sun setting on the horizon and the waves repeatedly rushing forward to wash Amma’s bare feet.

The meditation was held under the open sky in a small grassy field near the darshan hall. With a nearly full moon in the sky and Amma in their midst, the devotees engaged themselves in meditation on the sacred syllables Maa and Om. At the end of the meditation Amma answered a few of their questions and then led everyone in singing “Hari Bol Hari Bol.”

At the beginning of that night’s darshan, several of the children attending the retreat performed a musical play depicting scenes from Amma’s childhood.

Then, as if the day had not been full enough, when darshan finished Amma decided to dance. Getting up from her darshan chair, Amma walked onto the stage. She then asked everyone to stand up and dance along with her, feeling the bliss of the Self within. With the song “Bolo Bolo Gokula Bala” sounding through the hall, Amma moved from side to side, playing the kai-manis. As the song progressed, Amma moved faster and faster and then when it stopped she sat down in a meditative posture in utter silence and stillness. The devotees standing around her followed her example.

Devi Bhava darshan took place on Easter Sunday, and Amma gave darshan throughout the night and into the early morning hours. By the time Amma finished, the sun was rising over the ocean, and spreading its colours across the horizon. 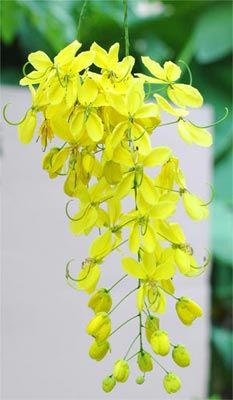 It’s hard to believe, but Amritapuri.org is having another birthday! It was six years ago this Vishu that the Mothersite first appeared on the Internet.

Upon waking up or entering the office, people throughout the world immediately log on to Amritapuri.org. The site is currently receiving more than 100,000 visitors every day, and some people have told us that they bought their computer simply to be able to avail themselves of the site. Nothing makes our hearts feel warmer. Spreading the glory of our Amma and helping our brothers and sisters who cannot be with Amma physically to keep abreast of everything going on around her are our only aims.

The fact that we were able to share such precious moments with all of you means so much to us. The truth is Amma’s personality is so rich and multifaceted that it is impossible to capture it fully. To whatever extent we have succeeded we owe to Her Grace alone.

We would like to take this opportunity to thank all the people who have helped foster Amritapuri.org over the years–writers, designers, programmers, those who have provided technical support and advice, those who have written comments via email  and those who’ve caught our mistakes. We truly thank you for your loving service to Amma.

We are also happy to tell you that a site in Malayalam, Amma’s mother tongue, will soon be launched. Those of you who know the language will finally be able to regularly read Amma’s words in their full spirit and punch!

We pray for Amma’s grace and your continued support.

@ Her Lotus Feet
The Web Team

The Ashram will build 100 houses in Bambooflat, South Andaman, as part of its tsunami relief-and-rehabilitation project. A memorandum of understanding to this effect was signed this week between the Ashram and the Andaman & Nicobar authorities. The expected cost of constructing the houses is Rs. five crores. The Ashram is the first NGO to make an offer to construct houses on the island.

“The construction is unique to the islands, considering the local customs and traditions,” says Brahmachari Narayana Chaitanya, the head in-charge of the Ashram’s tsunami-relief work in the Andaman and Nicobar Islands. “Moreover the islands are in high-risk zone of seismic activity. Thus the design of the houses must conform to local customs and traditions and also be earthquake-proof. The Ashram is constructing 50 twin-type houses of 1000 square feet each. Some of the houses are on stilts and some on plinth.”

The houses will be constructed with a galvanized-steel structure to avoid corrosion. Timber planks and processed bamboo board will be used for the external internal walls, respectively. The flooring in the stilt-type houses will be of processed bamboo board on structural steel work. These designs have been developed by CPWD Chennai. The ready-to-occupy homes come with state-of-the-art electrical fittings, including four fans and tube lights with provisions for fridge, mixer, colour television and telephone.

In fact, all the hardware materials for construction are to be sourced from mainland India—an estimated 1000 tons of material. A prototype house is under construction in Chennai. 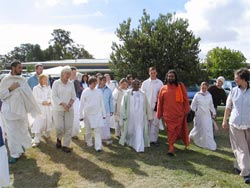 At Amma’s retreat outside of Melbourne, the air was filled with the sound of cockatoos and some devotees even spotted wild kangaroos grazing just across a field near the program hall—not to mention all the domestic cows, horses and sheep roaming about. At night all the stars came out, and one could see Orion, Scorpio and the Southern Cross in the Southern Hemisphere sky. Indeed, Campaspe Camp Grounds in Kyneton was a beautiful setting in which to commune with Mother Nature.

The culture of Australia’s aborigines, or tribals, is inextricably linked with nature. The aborigines commune with the spirits of the flora, fauna, human ancestors and of the land itself. Tal Kin Jeri, a music group of aboriginals that have been devotees of Amma for several years now, attended the retreat, and the group’s leader, Major Lancelot Sumner, performed a special smoke ritual to sanctify and purify the retreat grounds and to request permission to use the land from the spirits of the ancestors present in the region. After saluting the sky, the earth and the four directions, Major Sumner purified all the retreatants and then went blowing smoke throughout the campsite as well. On the second night, the group made an offering to Amma of an assortment of sacred dances, each of which depicted various animals of the Australian “bush.”

To the delight of the devotees, Amma herself danced during the retreat. Amma asked the devotees to form a large circle around her and then—to the singing of “Bolo Bolo Sabmil Bolo Om Namah Shivaya”—Amma blissfully swayed back and forth.

Finally, one of the local satsang groups drew a few smiles from Amma when they sang a version of “I’m a Believer,” the Neil Diamond rock song made famous by the Monkees back in 1967. Though ostensibly about worldly love, the song describes feelings many have had upon meeting Amma:

Prior to the retreat, Amma had held two days of public programs at Kingston Town Hall in Moorabbin, just south of Melbourne. On the first evening, the Honorary Consul General for India, Dr. Janardana Rao, garlanded Amma and addressed those gathered. Speaking about Amma’s tsunami-relief work, Dr. Rao said, “Amma’s work goes beyond religion and nationality. Her service is to all of humanity.” 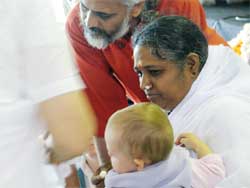 Less than two days after finishing the North Indian Tour, Amma was again giving darshan, this time in the city of Perth on Australia’s west coast. The programs were held in the Fremantle Marine Passenger Terminal, which is right on the Indian Ocean.

Huge windows let in natural light and provided a view of the harbour, where cargo ships unloaded their goods and dolphins could be spotted every now and then. On the first day a huge rainbow stretched across the eastern horizon as the sun set.