Amma held her first public program in Kumbakonam, Tamil Nadu. The program was held on a huge Banadurai Higher Secondary School grounds, capable of holding tens of 1,000’s of people.
In July of 2004, a disastrous fire took place in this city. The fire was in a school, and many children were trapped inside, unable to escape. Those who did survive were left with very severe burns, and some children had burns all over their body. The children who survived had an intense fear of fire. If their mothers tried to turn on a stove to cook, they would immediately go and turn it off. 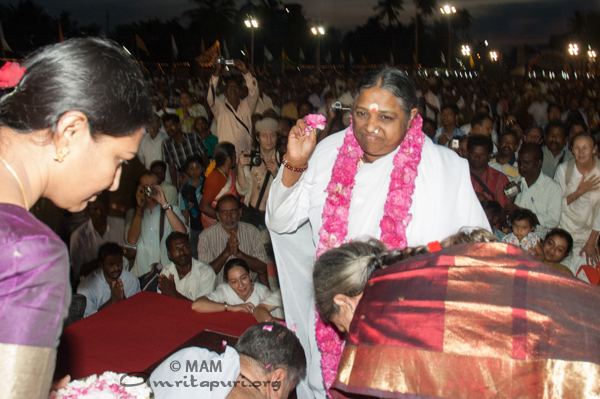 A group of the affected poor families from Kumbakonam came to Amritapuri to see Amma after the fire incident, in January of 2005. When Amma saw the children with burns, one could see her eyes fill with tears of compassion. She spent a long time consoling the children and their families, and later met the entire group privately in her room, sharing in their sorrow and offering them support. {news} 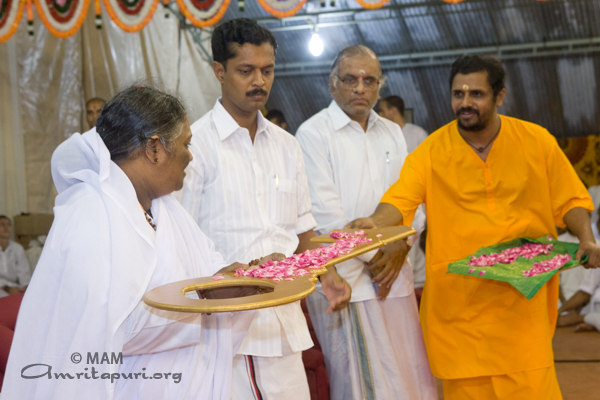 An interesting fact is that at the time when these children came to Amma with a fear of fire, the children from the coastal region near the ashram were overcoming their own fear of water, caused by their experiences in the tsunami.

In the public program here today, one could see the expression of Amma’s support, as Amma handed out the keys to ten newly built houses to poor families that were affected in the tragedy. Tamil Azaghan, the chairman of Kumbakonam Municipality, handed over the keys of the new houses to the recipients.

This is part of a scheme to build and distribute 51 houses for the families affected by the fire.

Sewing machines were also distributed to ten poor women from the area, in order to help them earn a livelihood.