On the way to Kumbakonam, Amma pulled over and stopped at a side road, with grassy fields on either side. The site was in the Cuddalore district of Tamil Nadu, the sun was setting. One could hear the sound of crickets chirping, along with the seldom sound of a truck passing by on the main road. A temporary light was put up from a generator, and the sound system team set up a small speaker and microphones. 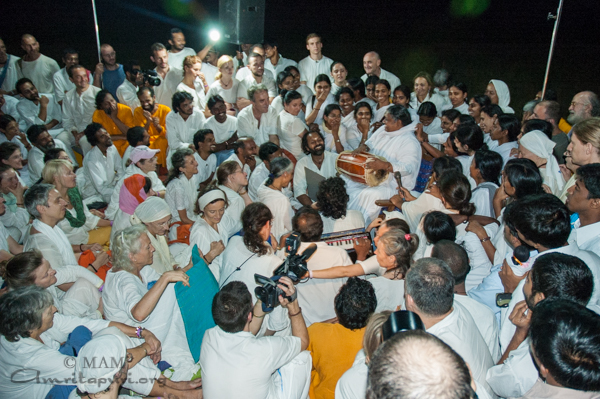 All the residents and devotees rushed to sit near Amma. Once everyone was seated, Amma started narrating some incidents from the previous programs. She talked about the behavior of one brahmachari who was in charge of crowd control, and imitated his expressions. This evoked a huge roar of laughter.

Next, Amma began to sing some of the new bhajans; one in Tamil, one in Hindi, and one in Punjabi. After bhajans, plates of food were passed out to everybody.

After dinner, Amma again spoke on the mic. She said, ‘being in the world today is like being a child in a supermarket. There are so many enticing objects. How can one overcome the attraction to all of this?’

Many people gave different answers. One brahmachari said, ‘the best way is by chanting one’s mantra.’ One woman said, ‘when one goes through such problems, one should try to feel Amma’s presence within.’ Another woman said, ‘just try to feel Amma with you always.’ One man said, ‘I’ve heard Amma speak on the subject many times, but how much am I following? I would like to make a list of things Amma has asked me to do, and of those things that I’m really doing. I need strength to be able to do what Amma has said, I need Amma’s grace.’
Everyone clapped at the answer. 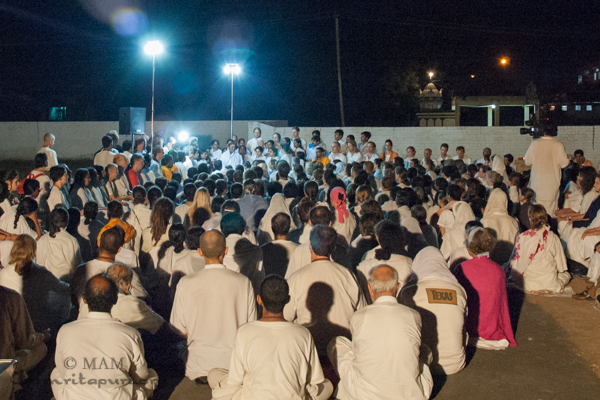 Finally, Amma shed some light on the subject. She said, ‘In all the works of Sri Shankaracharya, the two main qualities emphasized are viveka and vairagya (discrimination and dispassion). A small businessman will make a balance sheet everyday to evaluate his gains or losses, to make sure that he can carry on profitably. A big businessman need not do that. They can do that once in a while (because they an established business). We are all beginners. We need to take account everyday. A sadhak should constantly reflect on his actions.’

Amma stressed making spirituality practical in our lives. She said that some people might say, ‘I am the Atman (Self),’ but when adverse situations arise, they aren’t able to overcome them. The habit of reflection and evaluation of ones actions is the biggest gain.

Amma said, ‘One should do some japa, and also some meditation, but seva (selfless service) is also important. This is because the japa and meditation we do is for ourselves. But when we work for others, it is like breaking the seed’s shell (the ego).’

‘It is good to keep a daily journal of how much time we spend for japa, meditation, and seva. One can also reflect daily, for example, ‘Did I get angry today?’ ‘What was the reason?’

This kind of reflection is real meditation. Sometimes a person may sit and meditate, but as soon as the meditation is over, they get angry. In that way, all the energy gained by meditation gets dissipated. This is like creating a pile of sugar on one side, and creating a group of ants right nearby.’

Amma started to reflect on human birth. She said, ‘We have attained this human birth. Some people study for 20 to 25 years to gain a degree, then earn money and raise a family. By that time they are 50 or 60 years old but what have they actually attained? Not much. The real goal of human birth is to realize God. If life isn’t utilized for that, then what is the difference between humans and animals?’

‘When a lion travels, after a distance, it turns around and looks back. In the same way, we should look back and reflect, thinking, ‘Am I acting selflessly or not? When a turtle crawls, it leaves imprints in the sand. Likewise, we should leave the imprints of good deeds in our lives.’

Amma’s words filled the calm night, creating a reflective mood. The moon was shining above, Amma entered the camper to continue the journey to the next destination.