Amma held two days of programmes in the Chennai Brahmasthanam. The crowd overflowed the small Brahmasthanam grounds on both days, as the people continuously filed in from the busy streets to have darshan. On the second day, mass pujas were performed, led by Amma herself. 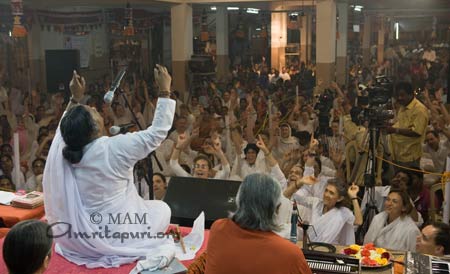 Chennai is one of the biggest cities in Tamil Nadu and is also home to a major film industry. Chennai is considered the Bollywood of South India. A few celebrities made appearances at the brahmasthanam festival.  K.S Chitra, a famous singer came and sang Krishna bhajans on the stage.

At the end of the second day’s darshan, Amma fulfilled the hopes of Chennai devotees by singing ‘Mata Rani.’ The hall blasted with the chorus, ‘Mata Rani Ki Jai,’ as Amma stood and exited the stage, off to the next program.

Amma came from Puducherry, and after these Chennai programs, she is heading to Kumbakonam. But for Amma, it is only like going from one room of a house to another room.