The day before the program in Trissur, Amma came to the roof of the Amrita Vidyalayam at around sunset. It wasn’t long before all the devotees and residents swarmed around Amma, like bees around a flower. After meditation, Amma asked the devotees to share a joke or experience related to spirituality. 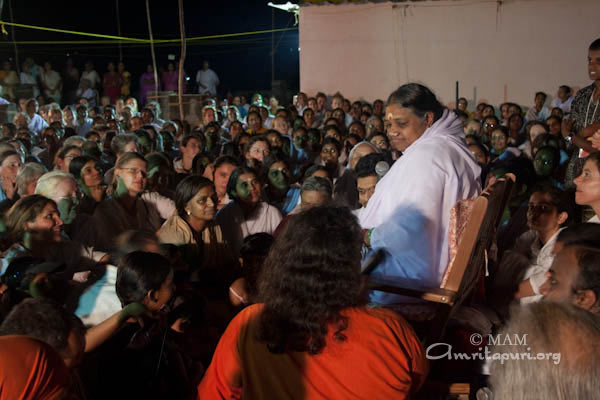 One Western devotee said, ‘More than anything else, I want to be close to your physical presence. But even when you are physically away, I still enjoy the beauty of your presence. Your jokes and your smiles give me so much energy. Whatever you do, you do it so well. I am grateful to you.’

After this, one brahmacharin spoke, “Seeing you after so many days, my emotions have exploded. I don’t know what to say. Your physical presence is very important to me. I feel like a dead log of wood when you are away, nothing happens – no meditation, no work, no seva. I’m like a dead person. Your presence makes a big difference. I am sure that you know the heart of your children. It’s very difficult when you’re not around. When you are there, it’s wonderful. My spirituality has been just to sit at your feet, just looking at you, doing nothing. Looking at you and being with you is the best credit I have. I haven’t done anything to come to the ashram. I know that you will say to see Amma inside and feel the presence within. We are so foolish and not in a state to feel your presence inside. Amma knows this. I request you to make us worthy of feeling your presence all the time.’

‘Shower your grace upon all your children, so that we will feel your presence wherever you are. Unfortunately, I cannot always feel your presence. At times, it’s very difficult to be away from you, and I’m sure that everyone else feels the same way. Being in your presence is the greatest blessing.’

Amma: ‘Is it not enough that you stay with your birth mother?’ (doesn’t she give you love?)

Brahmacharin: ‘That is not even an iota of your love.’

Amma – ‘Are you here to realize this five foot body? Is it not to realize the Consciousness that pervades the entire universe?’

Br. – ‘Personally, I have no idea of spirituality. I just came here to be with you. I will live and die for you.’

‘The birth mother has a particular importance. But we know Amma is not the physical body. We are not loving you just for your body. It is because of your love and compassion. The birth mother doesn’t have selfless love; there is some expectation. But all these years, I have seen that no matter what I have to offer, you never expected anything from me. That is true love, which is God’s love. No mother can give love like that. You are not just a biological mother; you are much more than that. I don’t have words to say what I feel.’

Amma – ‘Isn’t Amma the mother of all these children? If you just look at this body, will you not get sorrowful? If you become so attached to Amma’s physical form, will that not bring sorrow to you?

Amma: ‘You won’t always have Amma’s presence, and so you’ll always be sorrowful.

‘Take the pearl for example. It is said that a grain of sand enters into the oyster and makes it irritated. Out of that irritation, the body of the oyster reacts. It undergoes a lot of pain, but it is later transformed into a pearl. This is what people used to say.’

‘Separation is a pain, but that pain is converted into a pearl if it is with understanding of the Guru principle, then what you ultimately receive is Self Realization. But for many, the pain becomes anger, and then they find fault with Amma and the ashram. It can lead to that. If you don’t have a vision based on the Guru principle, then there’s a big chance to fall. You may even feel that Amma is partial. You may feel, ‘Amma doesn’t love me, she loves the other person more, she is partial, etc.’

Brahmacharin: ‘Please bless us so that we don’t have any such thoughts. I want to love all of your children. In fact, I can even give darshan. (everyone rolling with laughter) I don’t know whether Hanuman or the gopis had such thoughts.

Amma: ‘Yes, yes, they had these kinds of thoughts, but Hanuman’s attitude was different. The gopis and Hanuman also had this kind of feeling.’

Brahmacharin: ‘Then it’s OK, no problem.’ (everyone laughs)

Amma- ‘There is a story about Hanuman. Once, all of the devotees of Lord Rama became jealous of Hanuman, as Hanuman was always near Rama. They held a meeting and decided to write up all the services for Lord Rama. They then divided these jobs among themselves, purposely leaving out Hanuman. Finally, Hanuman came to know of this. He said, ‘there is one service that is not on the list, and I would like to do it.’

‘What is that?’ asked the devotees. ‘I would like to snap my fingers near Rama’s mouth when he yawns (to prevent him from locking his jaw).’ The other devotees felt this to be a very insignificant job, so they agreed.

After some days, they found that Hanuman was always near Rama. When asked why he was always near, he said, ‘We cannot know when exactly Rama may yawn. Therefore, I have to be near at all times; in the bedroom, in the bathroom, everywhere.’

There is another story of Hanuman, that shows his resolute faith in his Lord, Rama. Once, Rama had resolved to punish a certain king. This king went to Hanuman for protection. Hanuman wasn’t aware of Rama’s intention, so he promised to protect the king against anyone.

Finally, Rama came to the king in order to punish him. As Hanuman was bound by his promise, he stood in front of the king, offering protection. When Hanuman refused to get out of the way, Rama became angered and took out his bow. He shot arrows at Hanuman.

However, Hanuman didn’t fight back. He closed his eyes, folded his palms together, and chanted Rama’s name with devotion. The arrows transformed into flowers and found their way to Rama’s feet.

Amma said about the story, ‘Mahatmas have come to enact a play so that the devotees can get a proper understanding. Rama was a Jnani, so he would’ve known the situation. To show an example to the world, Rama may have created the situation. Hanuman may have not known, but Rama knew. To show the people Hanuman’s devotion, Rama may have arranged such a situation. So-called devotees will complain, ‘if Rama is omniscient, why did he make such a promise?’ Such a devotee might even leave Rama, but Hanuman didn’t leave.’

‘In the case of Hanuman, he had this understanding. You should understand that. There are both aspects: serving Rama physically and having firm understanding internally. If you don’t have that kind of understanding… you will have sorrow, you will not be able to be a good example, and it will lead you to danger.’