Amma’s third program of this month’s yatra was in Palakkad. The devotees were thrilled to see Amma, this being the one day of the year that Amma gives darshan in their hometown. There was supposed to be two days of programs, but as there was an all-state strike, it was not possible to have a second day. As the devotees came in increasing numbers, so was the temperature, the heat scorching everyone at above 40 degrees C. However, everyone was willing to withstand the extreme weather in order to get a moment close with Amma, to unburden their sorrows to her. There is an old verse in Sanskrit, ‘giving shade to others, while standing themselves in the scorching sun, giving fruits to others, Mahatmas are like trees*.’ Amma personified this saying, offering herself to the thousands who came for relief from problems, or those who came out of spiritual curiosity. 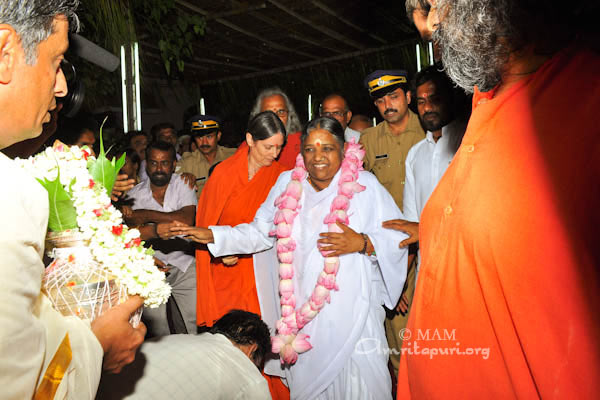 Students from the Palakkad Amrita Vidyalayam performed a variety of cultural dances during the darshan. Amma gave satsang, bhajans, and led a meditation in both the morning and evening. At the end of the darshan, Amma sang three bhajans. As Amma was leaving, a strong downpour started, bringing a coolness to the scorched earth. It was just like how Amma showered her love and compassion in the hearts of the devotees.