After Trissur, Amma gave two days of programs at the Brahmasthanam temple in Kochi.

Kochi is home to many of Amma’s institutions, including the AIMS super-specialty hospital and School of Medicine, School of Nursing, School of Pharmacy, School of Business,  School of Arts and Commerce, School of Visual Media & Mass Communication and the Amrita Vidyalayam. Many of the students and staff were eagerly awaiting Amma’s arrival the evening before. Actually, the month had been extremely hot, and as soon as Amma reached the premises, a small drizzle turned into a downpour. It was like a shower of grace for the devotees as they bunched together to get a glimpse of Amma as she walked to her room. As she looked down from the balcony on the devotees, they were singing and dancing in bliss, despite the downpour. 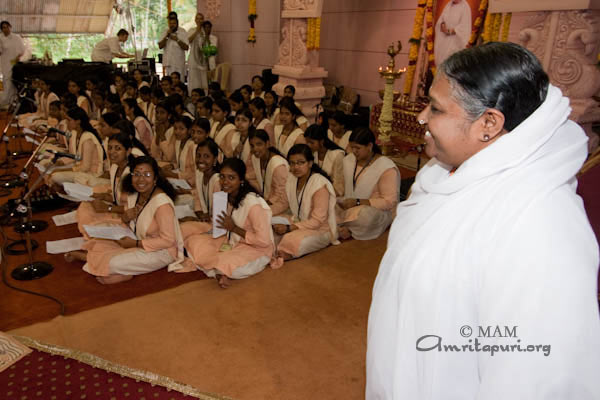 Before each program, the female students of  Amrita University chanted Vedic mantras as Amma approached the stage. All the students participated in various ways to help the devotees who came to see Amma. Some brought water during the programs, others served food, and others helped to collect and clean the plates during meals. The local devotees also helped out with a lot of enthusiasm. They formed lines for washing plates, singing bhajans and clapping as they worked. The devotion was very strongly felt in all the local devotees.

Amma gave both a morning and evening program on both days. In her satsang, Amma talked about ways to live a happy life. One of the points of the satsang was, ‘Happiness and love are not separate emotions. If one is absent, then the other will also be absent. If you are not happy, then you cannot be loving. We have to find the happiness within.’

As part of the evening program, numerous charity events took place. Youths representing a nearby village, Ezhikkara, gave a pledge in the presence of Amma.   They said that they understand the negative effects of alcohol and drug abuse and promised to not be deluded into the use of such intoxicants. They took an oath to make their village intoxicant-free within the next 5 years.
Scholarships to 200 students were distributed as part of the ashram’s ‘Vidyamritam’ free scholarship program. Pensions were also distributed to about 30 impoverished people from the area, as part of the ashram’s ‘Amrita Nidhi’ pension program. A High Court Justice and the Mayor of the city of Kochi helped to distribute the pensions and scholarships.
Many devotees participated in the evening Shani Puja, led by Amma. At the end of Darshan at about 6.45 am, Amma sang a Bengali bhajan – Kota tumi Jonani and rocked the stage. It was such a wonderful joyous moment and Amma was calling out ‘Maha Kali Ki Jai’.