Mata Amritanandamayi Math provides 242 free houses to flood-hit
242 families from the flooded islands of Kurvakurda and Mangigadda received new homes today in the village of Dongrampur, in the Raichur District of Karnataka. As part of its Rs. 50-crore relief-and-rehabilitation project {news} for victims of unprecedented flooding in Karnataka and Andhra Pradesh late last year, the Mata Amritanandamayi Math (MAM) has pledged to build 2,000 new houses {news} for victims who lost their homes in the flooding. In February 2010, MAM became the first organisation to complete homes for the flood victims, when it completed 100 new houses just 20 days {news} after beginning construction. At the time, while presiding over the inauguration ceremony, the Chief Minister of Karnataka, Shri. B.S. Yeddyurappa  lauded MAM’s efforts, and said he hoped the speed and efficiency with which MAM had completed the homes would inspire other NGOs to move quickly to help the flood victims.

The procurement of materials, management of the project, and liasion with government officials as well as members of the community was all handled by MAM.  Beyond that, many of Amma’s devotees and well wishers from all parts of India as well as University students from Japan {news}  volunteered their time and energy to help build the houses so quickly. The villagers of Dongrampur, where the houses are being constructed for the people from the flooded islands, were themselves extremely cooperative, despite the fact that their own houses have not yet been constructed.  MAM intends to build an additional 500 houses for the villagers of Dongrampur.  In addition to this, the people of the two island villages of Kurvakala and Agrahara are also being rehabilitated to a site on the mainland at Atkur.  All four affected villages have been regularly getting flooded during the monsoon season; the villagers have expressed great relief at being relocated to the safety of the mainland.

More than one million people were displaced by last year’s flooding.

The Chief Minister was also present for the handover of the 242 homes, where he exhorted the villagers to treat their new houses as temples. “Every morning, when I start my prayers, I remember Mata Amritanandamayi and all her good work. You are fortunate you are being given these new houses. Earlier, you people lived without toilets, electricity or water. All that is being provided to you now.” Revenue Minister G Karunakara Reddy, Housing Minister Katta Subramania Naidu and Fisheries Minister Anand Asnotikar also attended the function. 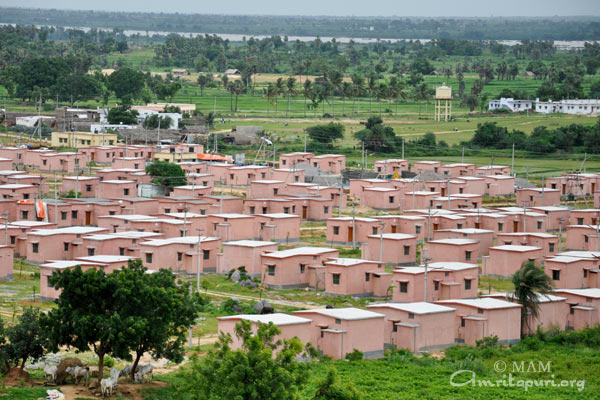 MAM provided each house with electricity and clean drinking water, and also paved new roads for the villagers. Rangamma, wife of Dodda Rangappa, from the island of Kurvaka, was one of the recipients. Expressing gratitude for her new home where she will live along with her family, Rangamma said that she was very happy when her name was announced as one of the beneficiaries. Even before the flooding, she never dreamt of living in such a well-built house with all standard amenities.