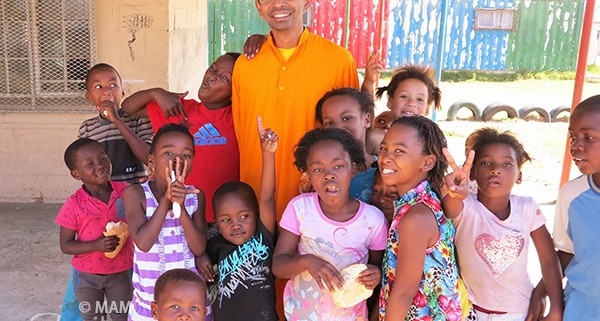 Br. Shubamrita Chaitanya visited the Republic of South Africa for a series of programmes from April 6 to April 10, 2015. 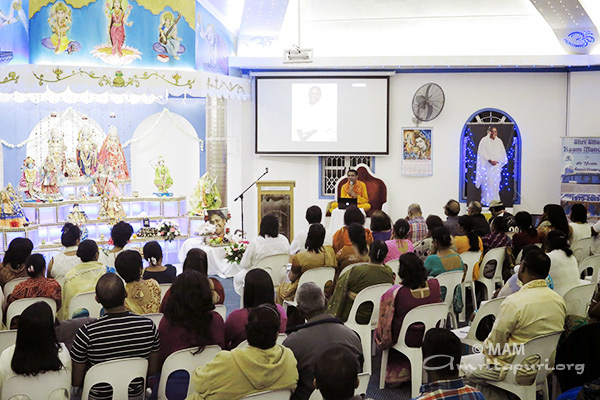 The programme in Durban on April 6 was held at the Sita Ram Mandir, and on April 7th at the Shri Sanathan Mandal in Stanger. Mrs Shameen Thakur Rajbansi, the Leader of the Minority Front and a member of Parliament in the KwaZulu Legislature attended the program in Stanger. During his stay in Durban, Shubamrita also called upon Mr. R. Raghunathan, the Consul General of India to South Africa, who evinced interest in the activities of Amma’s charitable organization, Embracing the World. Br. Shubamrita was also interviewed by the national TV station SABC 2, which was broadcast nationally. 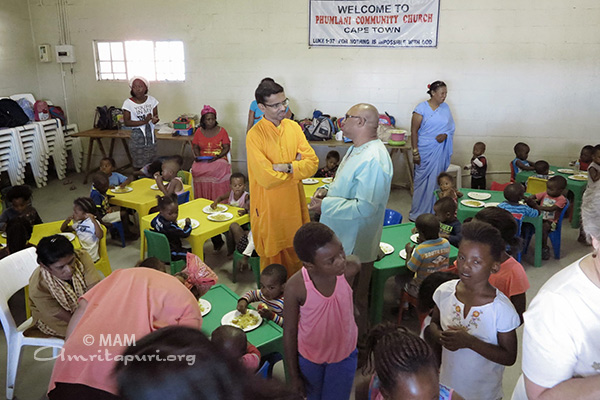 In both cities, the packed audience was keen on learning more about Amma’s life and teachings and wholeheartedly participated in the talks, soulful bhajans and meditations. In Cape Town, Shubamrita conducted a feeding for disadvantaged children at the Phumlani Community Center, along with the devotees of the local temple Sri Siva Sakti Aalayam. Nourishing food was shared with the children, along with smiles and laughter. 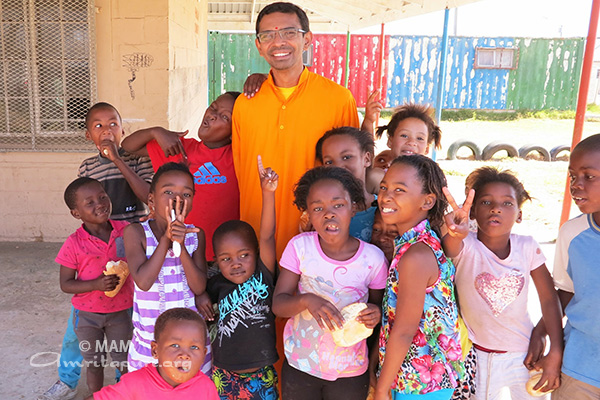 A public programme was held at the Novalis Ubuntu Institute in Cape Town on April 9th. It was a beautiful evening attended by members from all sections of society, giving due respect to the name of the venue – ‘Ubuntu’ describes the traditional African concept of the interconnectedness of humankind and very much correlates to Amma’s vision of unity and peace. Br. Shubamrita spoke on the topic, “Change Your Thinking, Transform Your Life,” which was greatly appreciated by the large audience.

At every city, one question could be heard again and again: “When will Amma come and visit this beautiful country of South Africa?” Amma’s devotees of South Africa pray that this day will come soon and wait eagerly with open hearts. 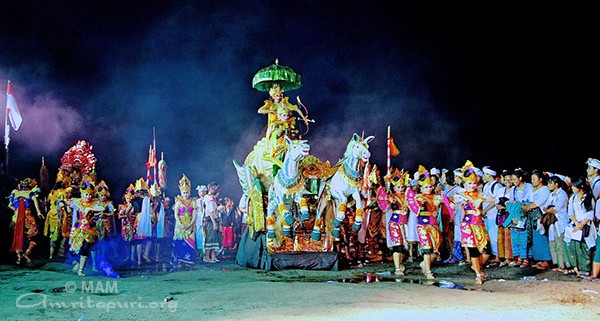 In connection with the Bhagavad Gita’s 5151st birthday, a record setting event took place at the Tanah Lot Temple in Bali.

Over 8,000 Balinese youths gathered to chant the Gita in its entirety. The youths remained seated for the full 3 hours it took to chant all 18 chapters of the sacred scripture, vowing not to get up until finished. 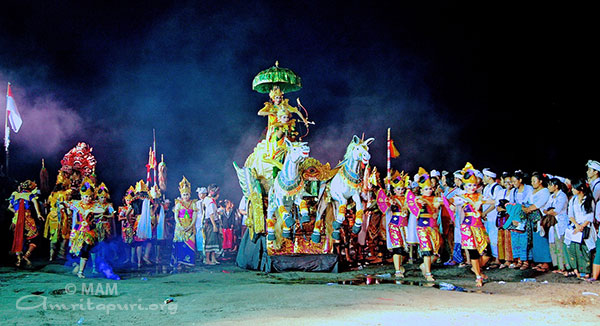 After the chanting was completed, a number of dances and performances related to Krishna and Arjuna’s interactions in the epic story were held .

The kind, innocent, nature of the Balinese, their resolute faith and devotion, as well as their preservation of their culture, was beyond remarkable. 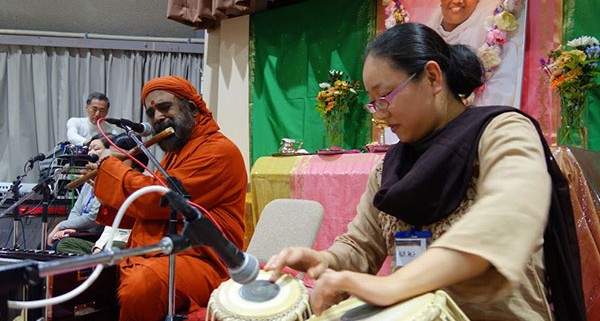 A Spiritual Camp was organized by M.A. Center in a secluded forest outside Tokyo. Participants got a chance to live in nature for three days, where they could forget all their worries and tensions and focus completely on invoking the Divinity within. Meditation and Amrita Yoga classes were held along with talks on Man and Nature, as well as bhajans and a special Guru Paduka puja ceremony. Many people along with their children participated in the 3-day retreat which was led by Swami Purnamritananda.

After his programs in Peru and Chile, Swami Ramakrishnananda travelled to Brazil to wrap up his South American tour. The first two days of programs were held in Sao Paolo where more than 400 people gathered to take part in Swami’s programs. 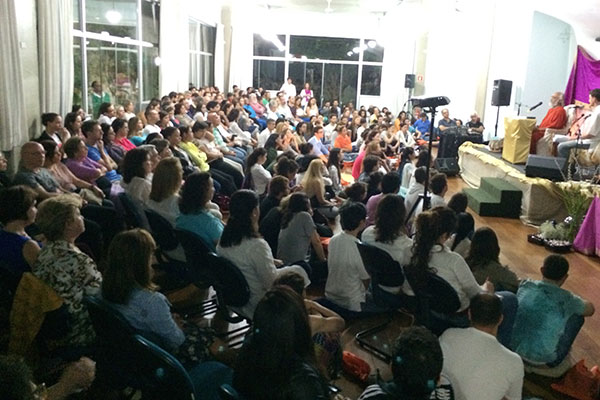 From there Swami traveled up the coast to the village of Araruama and had an evening program at the Templo Amrita. Swami recounted several intimate experiences from his early years in the ashram by Amma’s side. 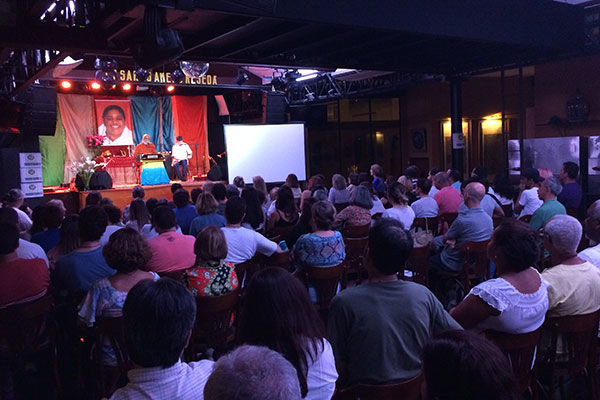 Swami ended his tour in the beautiful city of Rio de Janeiro. The first evening there Swami held a program in the heart of the city at Casarão Ameno Resedá. The next day Swami was invited by Professor Walter Suemitsu to give a talk at the prestigious Universidade Federal of Rio de Janeiro. 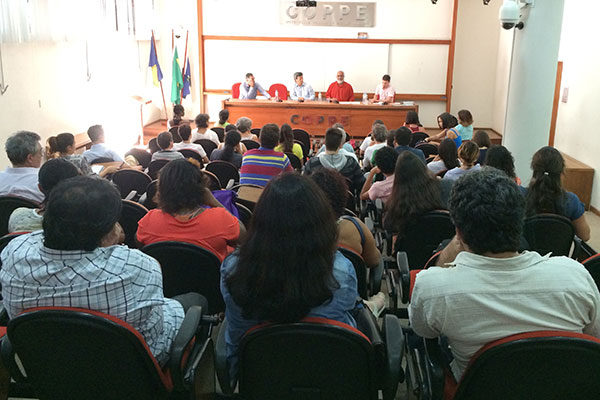 On the occasion, Swami discussed the relationship between science and spirituality and then held a lively question and answer session with the students and faculty.

More than seven years ago Amma made her first trip to South America, landing first in Santiago, Chile. Even though so many years have passed one can feel her presence alive and well when you see how many people show up to attend Swami Ramakrishnananda’s programs there.

His first program there took place in the beautiful coastal town of Viña del Mar at the Hotel O’Higgins. It was Swami’s second visit to the city that lies a bit more than 100km away from the capital of Santiago. Close to 400 people filled the hotel ballroom and listened very attentively as Swami explained the subtle aspects of the human mind and personality.

The following day Swami held a program in the Club Providencia in the heart of Santiago. There were lots of familiar faces from Amma’s 2007 visit on hand amongst the more than 500 people who came and enthusiastically participated in all parts of Swami’s program. At the end of the evening several devotees stood up and unfurled a big banner saying “Amma vuele a Chile!”…asking Amma to please come back to Chile.

Swami Ramakrishnananda began his South American tour with two days of programs in Lima, Peru. It was Swami’s third visit to the country.

The first day saw a full hall at the Club Arabe enthusiastically participate in learning the Integrated Amrita Meditation (IAM).  Most people in attendance were trying mediation for the first time and were very grateful for the opportunity to learn Amma’s technique. 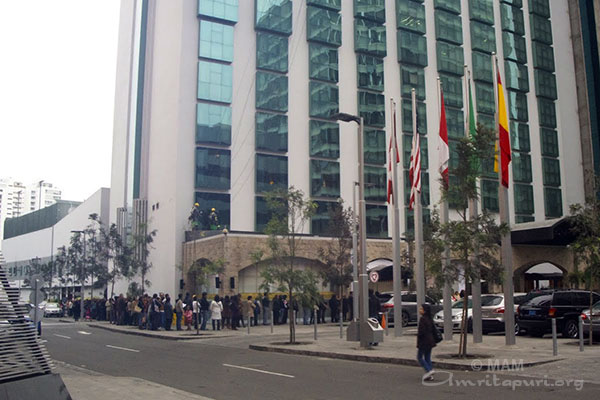 Later that evening Swami held a program in the center of Lima at the Swissotel. Well before the program began a large line snaked outside the hotel and around the block with several hundred people eagerly waiting to enter.  More than 600 people were on hand to hear about Amma’s life and teachings, masterfully shared through Swami’s insightful and entertaining satsang. 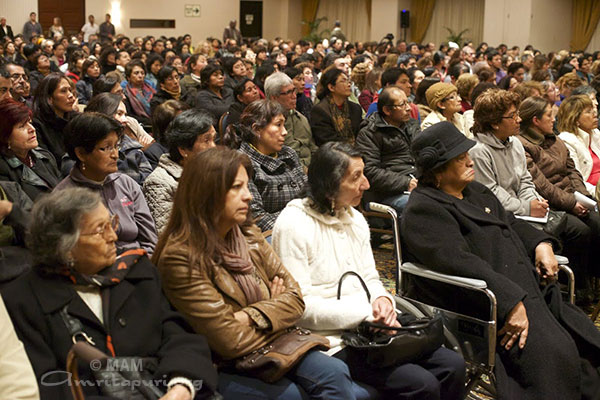 Following his talk, Swami led several bhajans, in Sanskrit, Spanish and English, each greeted by a round of applause.  The program concluded with a guided meditation but no one was ready to go home.  Before leaving everyone very patiently lined up and one by one took the time to personally thank Swami for coming and offering them such a wonderful evening of inspiration. 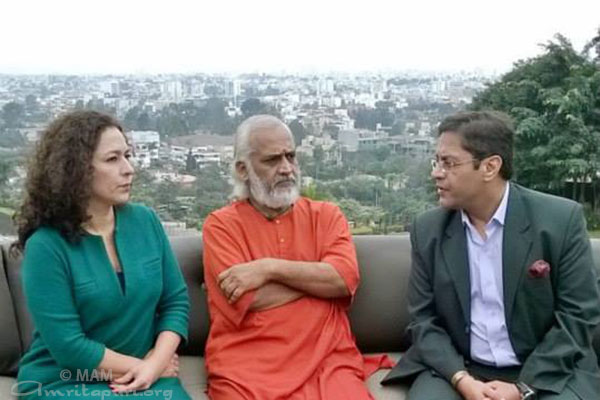 When Swami met Manpreet Vohra, Ambassador of India to Peru and Bolivia and Ms. Cecilia Chacon DeVettori, Member of Congress for the Peruvian Government.

Right in the centre of the Netherlands, close to Utrecht and the venue where Amma’s annual program is held, is the new Amma Centre of the Netherlands. It’s a two-acre property . A 1940s-era villa with an extension added more recently, this Center houses two large satsang rooms and more than 20 smaller rooms. 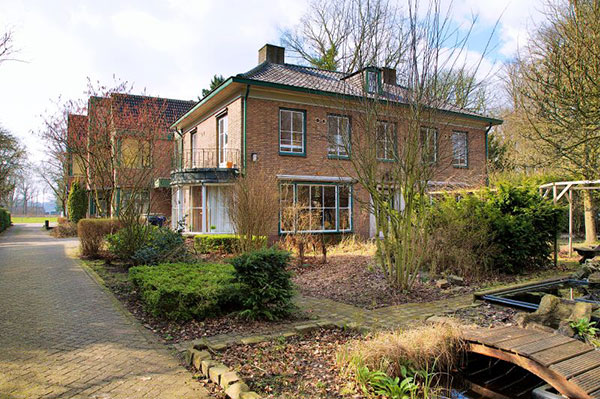 It’s situated within an hour from Amsterdam and the airport, and is only 800 meters from a railway station, making it very central and convenient for devotees to come for satsang and weekend retreats. In the spacious gardens, a permaculture fruit and vegetable garden will be cultivated. 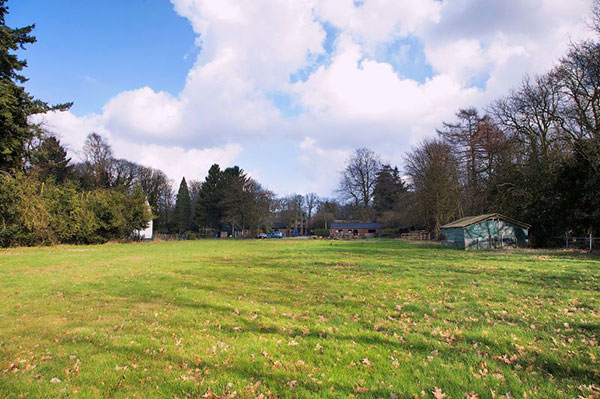 The volunteers of Embracing the World in Slovenia donated 10 tonnes of food (5,000 kilos of rice and 5,000 kilos of Pasta) towards families in need during a public function held in Ljubljana, the capitol city of Slovenia on May 22, 2014. Br. Shubamrita Chaitanya handed over the supplies to the ‘Friends of Youth’ organization by handing over a symbolic cheque to their representative. The distribution was done in five places in the country namely Ljubliana, Maribor, Novo Mesto, Šentjur and Carinthia. It was the first major humanitarian project in Slovenia by Embracing the World.

Br. Shubamrita also gave a talk on the topic, “Change your Thinking, Transform your Life” which was greatly appreciated by the packed audience. The talk was followed by bhajans and a session of guided meditation.

Brahmacharini Dipamrita Chaitanya visited Tahiti for one week of programs. It was the first time a representative from Amma’s organization visited the remote island. 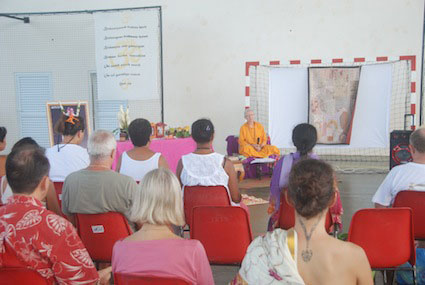 During her visit, Bri. Dipamrita and Catherine Graindorge were interviewed by several major media outlets, including a popular TV channel (Polynésie 1ère), as well radio and newspapers, who all helped announce the programs. It was also great timing that very week Dipamrita was in Tahiti one of the major French channels on the island broadcast a program on Amma. 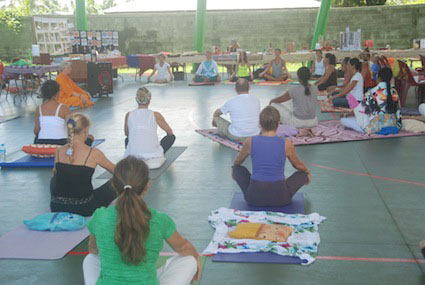 The response was very positive from all who attended and after Dipamrita’s visit many Tahitians came to Los Angeles to meet Amma during her summer tour. Following the programs, devotees living in this small island of French Polynesia have started a regular satsang group and and officially registered the association ‘AmmaTahiti’ allowing them to officially begin to do charitable activities inspired by Amma’s example on their island. 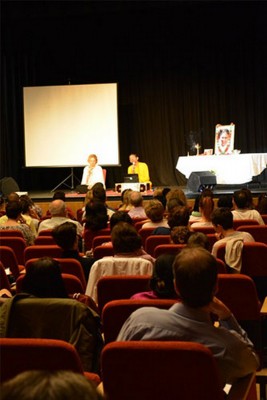 The very first stop of the European Tour of Br. Shubamrita this year was Hungary.

Lots of people came to see him and listen to his spiritual talk. More then half of them was newcomers and heard about Amma only recently.

Br. Shubamrita’s talked on how you can make your life more easy while only changing your thoughts and concentrating just on the next step – filled their hearts with relief. His beautiful words were so touching that after the program you could see many of the participants’ faces shining. Lots of them said that they decided to follow those simple suggestions swami had proposed.

After the break devotional bhajans and meditation helped their minds to settle and surrender.

“I am thankful what I received here today: the theory of “changing your thoughts” is very familiar to me, but understanding it and living it was not completely synchronised. Swami’s words swam directly to my heart and furthermore I have received practical advises on the “how to” side. I appreciate it so much!” said a participant after the program.