The volunteers of Embracing the World in Slovenia donated 10 tonnes of food (5,000 kilos of rice and 5,000 kilos of Pasta) towards families in need during a public function held in Ljubljana, the capitol city of Slovenia on May 22, 2014. Br. Shubamrita Chaitanya handed over the supplies to the ‘Friends of Youth’ organization by handing over a symbolic cheque to their representative. The distribution was done in five places in the country namely Ljubliana, Maribor, Novo Mesto, Šentjur and Carinthia. It was the first major humanitarian project in Slovenia by Embracing the World. 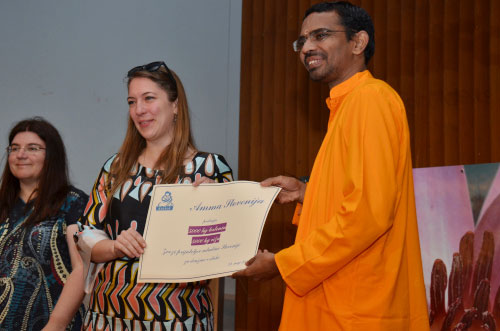 Br. Shubamrita also gave a talk on the topic, “Change your Thinking, Transform your Life” which was greatly appreciated by the packed audience. The talk was followed by bhajans and a session of guided meditation.