Amma’s last visit to Kodungallur was back in 2001. Since then, the ashram has expanded quite a bit. A piece of land adjacent to the ashram has been acquired and a a temporary darshan hall has been erected there for use over the next three days. 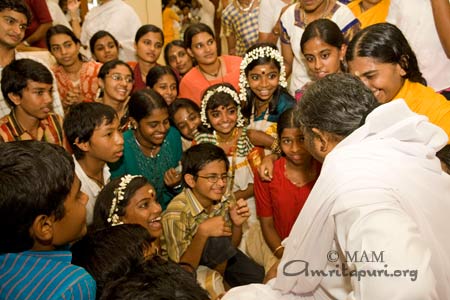 During today’s evening satsang, Amma said that even though she has not physically been to Kodungallur for the past several years, she is always seeing the Kodungallur children in her heart. Amma went on to add that in Kodungallur the community has still been able to maintain the innocence of a village.

In a small function earlier in the evening, Municipal Chairman P.A. Gopi and Vice Chairman P.H Abdul Rasheed helped distribute sewing machines to several ladies, providing them with a means of self employment.

Amma will be blessing the innocent children of Kodungallur for the next two days of the Brahmastanam festival.