Amma’s first visit to Kozhikode was at a devotee’s house back in 1984.  Since then, Amma’s public programmes have drawn huge crowds. 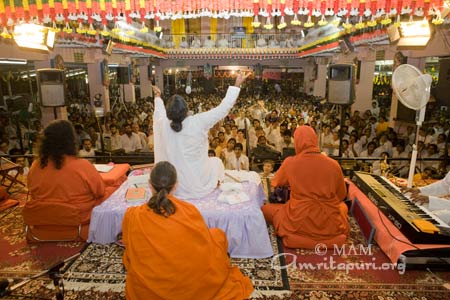 In 1993, the Brahmasthanam Temple was inaugurated and successive programmes have been held there. Kozhikode is Amma’s Vrindavan {news} – home to thousands of fervent and passionate devotees. During the Brahmasthanam festivals, thousands of people would stand in line in the hot sun and cold nights with family members of all ages for hours to receive her trademark embrace. At least 1,70,000 people filled the Corporation Stadium this evening for Amma’s visit to Kozhikode. The outdoor sport stadium setting and huge crowd immediately reminds one of Amritavarsham50 {news}. “Lokah Samastah Sukhino Bhavantu” and Bhakti Ta Jagadambei” were playing over the sound system just before Amma’s arrival. Dancers and performers in Kavadi and Mohini Attam costumes entertained the crowd. By 5 p.m., the stadium field was packed with people and the upper level seats were starting to fill up.

At approximately 6:00 pm, Amma entered at the far side of the stadium. As she walked across the field, dozens of devotees threw flower petals on the path. One thousand colourful helium-filled balloons were released into the skies.

Renowned Cultural Icon Soorya Krishnamurty gave the Welcoming Speech and introduced Amma to the crowd: “Amma has shown through her life that concern for others is real culture, not music or dance or art.” UC Raman MLA, assisted by ex-Minister Sujanapal and Managing Editor of Mathrubhumi daily PV Chandran, helped distribute pensions to the needy. A total of 500 new recipients will receive pensions as a part of Amrita Nidhi. A.K. Balan, Minister for Electricity, helped distribute sewing machines to the unemployed. A total of 50 new people will receive the machines.

Speaking on the occasion, Mr. Balan said, “Amma directed religion and faith in God to the field of service. Without encouraging blind superstition, Amma is teaching us to love one another. During the time of the tsunami, Amma gave a perfect example of service. In areas where the government has stepped back from the field of service, Amma has stepped in and brought solace to the people.” Sitting with Amma on stage were dignitaries from a cornucopia of fields representing politics, academics, and the arts.   They included: Kerala Forest Minister Binoy Viswam, Minister for Electricity A.K. Balan, Samutiri Sri PKS Raja, U.C. Raman local MLA, Advocate Sujanapal, Justice V.K. Eradi, Dr. Madhavan Kutty, M.G.S. Narayan – Historian, Sri Soorya Krishnamurty, Film star Actress Kaviyoor Ponnamma, and Film star Sri Balachandra Menon, Kerala Forest Minister Binoy Viswam addressed the gathered crowd:  “I am an atheist.   Here is this woman who is not making any claims about herself.   But I have seen this woman in action during the tsunami – how courageous and organized she was while serving the people. Amritanandamayi Devi is able to love everyone without distinguishing between those who ‘have’ and those who ‘have-not’. She is teaching the world service to humanity. Therefore I accept Amma. ” 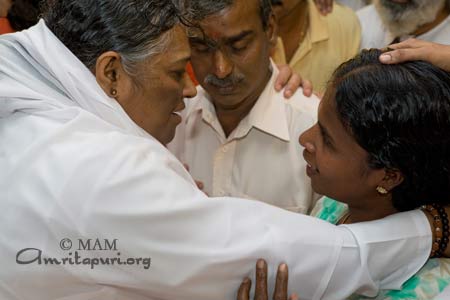 Renowned Malayalam Actress Kaviyoor Ponnamma paid her tributes to Amma: “Trying to say something about a Mother who showers goodness upon the world would be incomplete. I am not worthy to speak about her compassion and greatness.” Ms. Ponnamma helped distribute certificates of recognition to the 10 best employees of Amrita Sree (Amrita Self Reliance Employment and Empowerment) –  a service project which manufactures and sells essential household items.

The group was inspired by Amma and provides a means of livelihood for the unemployed. Film star Balachandra Menon also spoke: “I first met Amma in 1988 and I have been reading Matruvani magazine regularly. The words reflect Amma’s simplicity.  They become a guru and guide in times of difficulty.” He also advised everyone to read Matruvani. After the ceremonies, Amma began giving darshan. Students from the three Amrita vidyalayam schools in Kozhikode then presented a multi-act play about Kerala – “God’s Own Country”  – depicting scenes from the many religious festivals held in Kerala throughout the year.

Amma’s Darshan finished just after 3pm the next day. Amma had been sitting from 6pm to 3pm – 21 hours. 1,70,000 people had stayed through the windy cold night, and hot day sun. Smiling, she got up from the stage and into her van for the trip to Kodungallur.