Blog - Latest News
You are here: Home / Ashram Life / Watch out for those green lights

Today Amma came to give satsang to all the ashramites. One of the first questions put to Her was by a new visitor to the ashram. “Amma,” he said, “When I first came to the ashram I had a wonderful experience. I felt my aajnja chakra [third eye] open up and I attained a divine consciousness. But after five and a half days, the experience left me, and now I am very depressed. What happened?”

Amma began by telling the man that for those five and a half days he had “pushed the button” on the torch [flashlight], and therefore he’d seen “the light.” But whatever he had been doing he must have stopped and thus his experience ended. But that didn’t matter, Amma said, seeing the path before him illumined he can now continue forward inspired and guided by what he had seen.

Such experiences may come, Amma said, but don’t give them too much importance.  Consider them something to inspire you to persevere in your spiritual practices. We should let such experiences come and also let them go. If we don’t let them go, we may find ourselves stuck on them.

Amma said we may experience many things along the path to realisation. Perhaps we will see a blue light or a golden light, etc. But we are not here to chase such experiences.

Amma then told a story about a man who began seeing a green light in his mind while meditating. He became so obsessed with the light that he soon started seeing green lights everywhere he looked. Then one day while driving his car through an intersection, he met with a bad accident because he thought even the red light was green.

Amma concluded be saying that such experiences are not the way to gauge our spiritual progress. This can only be judged by checking our ability to face all situations with equanimity of mind and our ability to always be loving and peaceful towards others. 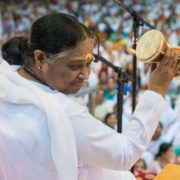 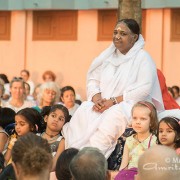 All of you are my angels : Amma

Give Peace A Chance

Give the body, live after your death