Amma’s first visit to Washim, an agricultural town in Maharashtra’s Vidarbha Region, was truly something to see. The people had never met Amma before, but they welcomed her with all the hearts and souls—filling the streets and offering her their pranams as she drove past and surrounding the house where she was staying. 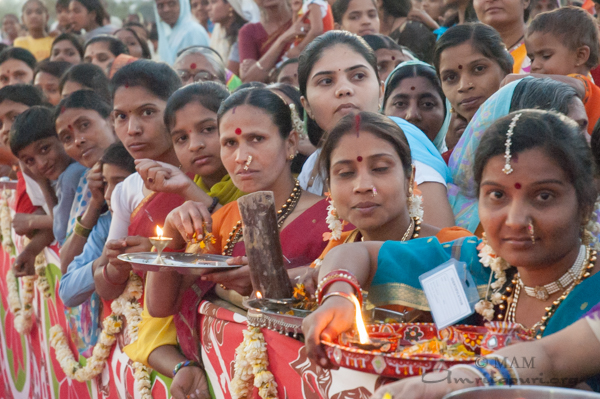 Vidarbha is the place where of India’s farmer suicide problem at its peak, with thousands upon thousands of debt-ridden farmers taking their own lives (and often the lives of their wives and children along with them). It has been reported that in 2006, farmers in Vidarbha we committing suicide at a rate of one in every eight hours. These same people were coming here for Amma’s darshan. Dressed in their simple village clothes—turbans and white hats for the men, traditional big nose ring, fluorescent green, pink and yellow saris for the women—50,000 or so came to seek Amma’s blessings. It looked like entire Washim was there.

Dr. Vijay P. Bhatkar, the famous computer engineer from Pune, addressed the people just prior to Amma’s arrival. He said to them, “Jagadamba has come to Vidarbha. You must all now take a vow that you will not commit suicide. You must take this vow on Jagadamba’s feet, which have now touched your soil.” All of the people enthusiastically shouted forth in accord, many raising their arms into the air and calling out Amma’s name. 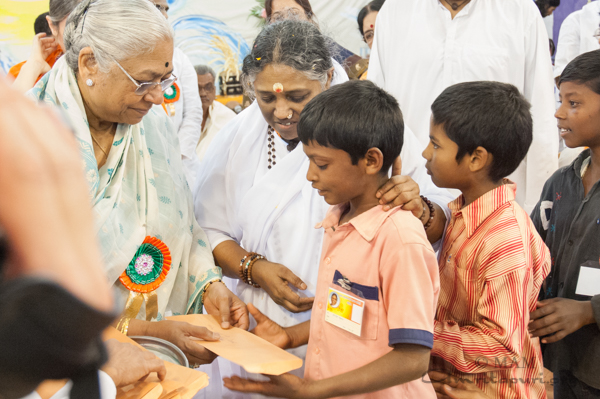 On the dais was a huge collection of the area’s political figures—a total of 17 Members of the Legislative Assembly and seven Members or Parliament, representing diverse political parties. They all humbly welcomed Amma with flower garlands and stayed throughout Amma’s satsang and bhajans.

Smt. Prabha Rao, the president of the Maharashtra Pradesh Congress Committee, was one of those to address the people assembled. She said, “We are fortunate that Amma’s feet have blessed the land of Vidarbha.” She also spoke about the immense relief program that Amma has created to curb India’s farmer-suicide epidemic and helped Amma distribute scholarships to children of impoverished farmers from the area who had previously been forced to discontinue their educations due to their parents’ inability to pay school fees.

The leader of the opposition, Sri. Baba Saheb was also on the dais, and he similarly helped distribute scholarships.

Between the stage program and darshan, Amma distributed 5,000 such certificates throughout the night. {Read about the project announcement}

Darshan lasted until 10 am the next morning, with Amma blessing a large sack full of prasad to be distributed to latecomers.