8 October 2017 — Kollam, Kerala: At a function held today at Mata Amritanandamayi Math in Kollam, Honourable President Shri Ram Nath Kovind launched a new charitable initiative through which the Math aims to provide filtration for clean drinking water to one crore [10 million] villagers throughout the nation. The initiative was inaugurated in the presence of Amma. 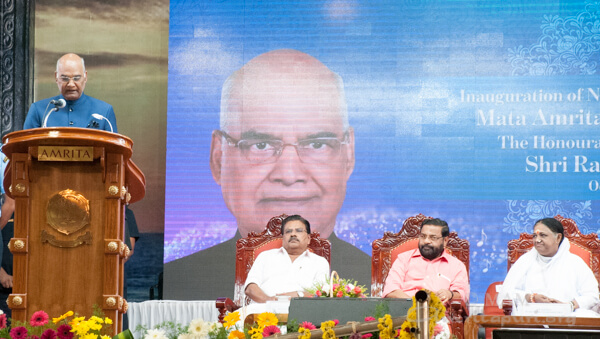 Speaking on the occasion of inaugurating the project, the President referring to Kerala’s role as one of the leading spiritual homes of India, said “Mata Amritanandamayi represents this enlightened spiritual tradition of Kerala. Like Adi Shankara or Ayyankali, Amma sees her spiritual mission as a contribution to nation building. She recognises, as only the truly spiritual can, that the greatest service to the Divine is service to fellow human beings.

He also said “The bravery of our soldiers on the one hand and the compassion and wisdom of our spiritual leaders on the other are twin pillars on which we rest our hopes.”

Praising Amma’s activities he continued “And the greatest service we can render to our fellow human beings – especially to those less privileged than us – is to help them achieve their potential. This includes building their capacity in health and education, and ensuring that they get equal opportunities. Amma has worked precisely in these areas.”

“Addressing a College event in Delhi recently, I had said, The truly educated are not those who collect degrees, but those who use those degrees and the under-lying scholarship to become nation builders in our society. I am moved to learn that the Amrita University follows a similar philosophy. As Amma herself has said: “Today, universities and their researchers are ranked mainly based on the amount of funding they receive, the number of papers they publish and their intellectual caliber. But along with this, we should take into consideration how much we have been able to use their research to serve the lowest and most vulnerable strata of society.” 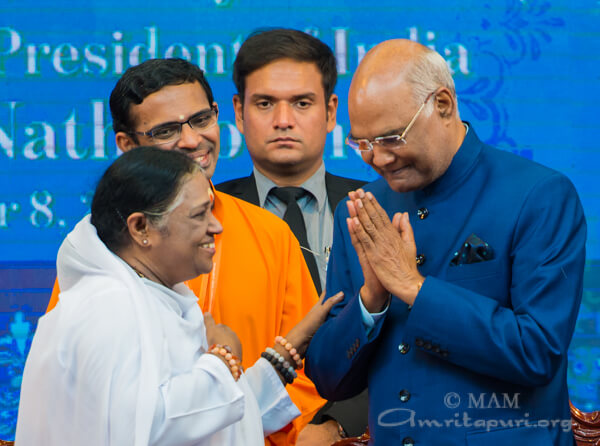 “Spiritualism challenges us to raise the quality of human consciousness – and raise the quality of life of every human being. The projects of the Math that are being initiated today do just that. They aim to provide clean drinking water in 5,000 villages across the country. And they strive to make villages open defecation free. Such initiatives promote the health and well-being of individuals and families. Such initiatives are reflective of both the spiritualism and the progressive ideals of Kerala – as embodied by Amma.”

“While concluding, I would like to wish Mata Amritanandamayi good health and a long life to serve humanity in the coming years.”