President of India, Shri Ram Nath Kovind presented village leaders with certificates verifying their respective villages as Open Defecation Free by Swacch Bharat Abhiyan. An ODF (Open Defecation Free) village is one wherein all households have access to a toilet and no human waste or sewage pollutes the village surroundings. 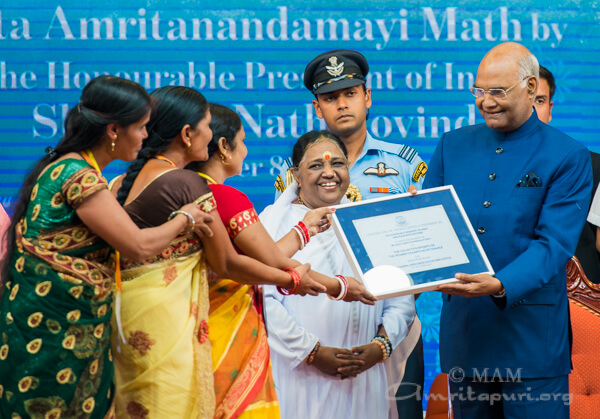 “We are very proud of these villages,” said Prof. Bhavani Rao, Amrita University’s UNESCO Chair in Women’s Empowerment and Gender Equality. In many of these villages, it has been the women who have built the toilets themselves after being trained by the MAM in plumbing and masonry, etc. “Now, instead of their normal unskilled labor, they are challenging gender stereotypes and seeking work as skilled workers,” said Prof. Bhavani.

“These villages are an inspiration to the other villages we work in,” she added. “We expect many more of our adopted villages to become ODF-verified by the end of the year. In fact, this effort is just the beginning. The women in most of these villages now have set a new goal — attaining ‘Nirmal Gaon’ (clean village) status, which comes only when all the villages in their district become ODF.”