Amrita SeRVe is a program through which the Mata Amritanandamayi Math (MAM) has selected 101 villages throughout India with the goal of helping them become self-reliant role-model villages for the country.

When asked about why Amma was starting Amrita SeRVe, Amma said that villages are India’s foundation—its life-force—and that it is society’s responsibility to take care of them. “It is our villages that, in fact, sustain us by providing we, who live in the cities, with the vegetables and other forms of nourishment we need to in order to survive,” Amma said. “However, today, we are just exploiting them and casting them aside. It is time to acknowledge that our villages are our very foundation and move forward with one heart and one mind to protect and serve them.”

With the goal of holistic development, Amrita SeRVe is providing assistance to villages in the following focus areas:

“Travelling across the length and breadth of India as part of her annual tours—stopping in remote areas en route from one city’s program to another—Amma has personally listened to the problems of millions of poor villagers from all over the nation,” said Swami Amritaswarupananda, the Vice-Chairman of MAM, upon Amrita SeRVe’s launch during Amritavarsham60. “No one knows a child’s heart better than its mother. So, too, no one knows the heart of this world better than Amma.”

Amritavarsham60 also witnessed a summit {news} titled “Our villages, Our world: What can we offer” in which people from different walks of life discussed about how to develop our villages.

The Mata Amritanandamayi Math—which has had Special Consultative Status with the United Nations Economic-Social Council since 2005—has vast experience in each of these seven areas. Listed below are only some of the activities being undertaken in each area. 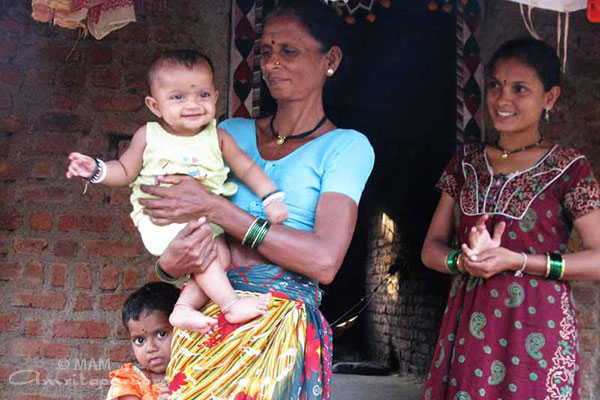 – Conducting regular medical clinics in the villages where health care is difficult to access.
– Training health workers at the Amrita Institute of Medical Sciences (AIMS), where over 2.6 million people have received totally free medical care since 1998.
– Providing vegetable seeds and educating villagers in home vegetable cultivation. This has been shown to be the most effective mechanism to combat malnutrition.
– Installing filters to provide clean drinking water. 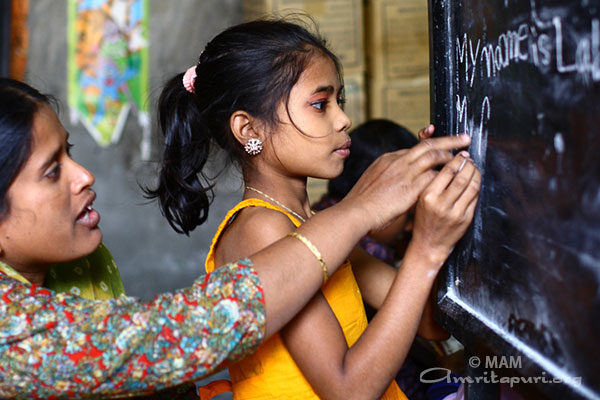 – MAM currently provides 46,000 scholarships throughout India through its Vidyamritam program. Now poor children in all villages are receiving these scholarships as well.
– After school tutoring and adult-literacy programs using a multimedia tablet-based learning program called Amrita RITE (Rural Indian Tablet-Enhanced Education).
– Leveraging the Sarva Shiksha Abhiyaan of the Government of India to help upgrade all village schools to Standard XII
– Rural internships for university students. In June 2014, 13 teams of students served in our villages following Amma’s call for action first made many years ago. 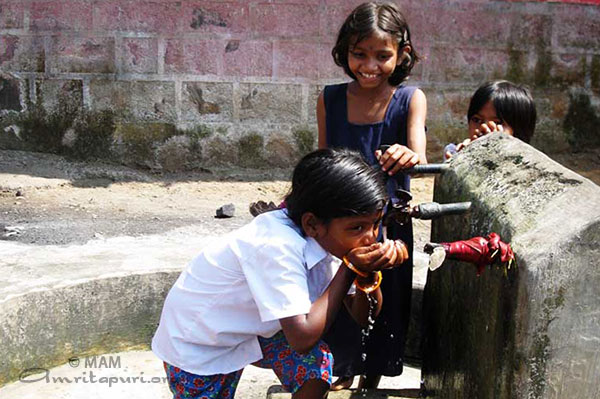 3. Water and Sanitation
– Rainwater harvesting by educating farmers to make contours and trenches on farms. The former minimize the use of water for irrigation and the latter help recharge groundwater.
– Training AYUDH teams in implementing watershed projects. India is the largest user of groundwater in the world and farmers are the biggest consumers of India’s waters.
– Building toilets that use less water. Leveraging the Nirmal Bharat Abhiyaan of the Government of India to empower every family to build a toilet.
– Cleanliness drives and basic recycling education through MAM’s Amala Bharatam Campaign, that has been conducting regular clean-up drives throughout India since 2010. 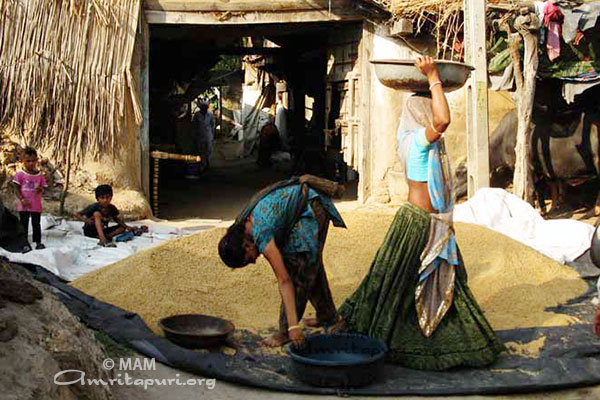 – Training farmers in natural farming and organic agriculture practices. Educating them about the harmful effects of using chemical pesticides and fertilizers.
– Developing a model farm at Amritapuri where training can be provided as part of a certificate course from Amrita University in natural farming. The course is modeled after similar courses offered by universities worldwide.
– Starting a seed bank to provide free seeds to farmers. Creating a knowledge repository to enable farmers to know which companion crops to plant and when.
– Providing irrigation facilities so that farmers can grow a second crop after the rainy season is over to help increase farmer incomes and check migration. 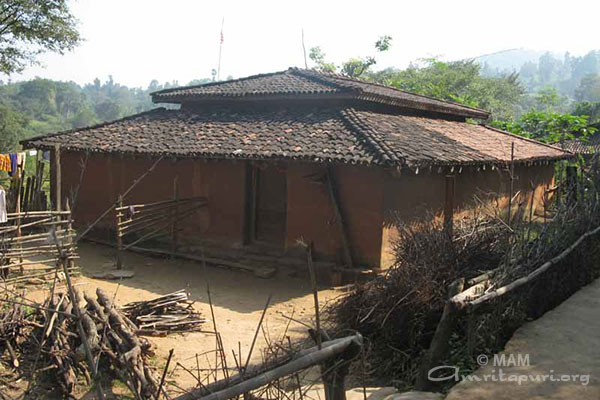 – The Amrita Kuteeram program has built more than 45,000 houses throughout India. Now in Amrita SeRVe, this program is being extended to villages as well.
– Where possible, the emphasis is on using eco-friendly building technologies such as using compressed mud blocks. Traditional building technologies are also being strengthened.
– MAM has already planted more than one million saplings since 2001. Now as part of Amrita SeRVe, massive afforestation drives are being undertaken in the villages.
– For villages not connected to the grid, Amrita SeRVe is providing options through the solar panels developed at Amrita University. 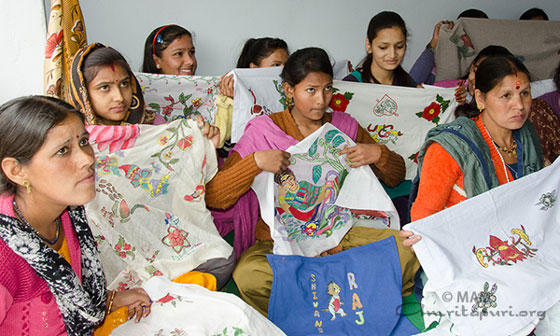 – MAM has already helped more than 100,000 women to form 6,000 self-help groups; now self-help groups are being formed in our villages also.
– Computerized vocational training for fabric painting, artificial jewelery making, etc. is being provided by Amrita University’s AMMACHI Labs.
– Leveraging local resources to make value-added products and reviving traditional arts and crafts are the focus of our income generation programs.
– Pensions are being provided to the needy; MAM is already giving Amrita Nidhi pensions to 69,000 widows and physically and mentally challenged people throughout India. 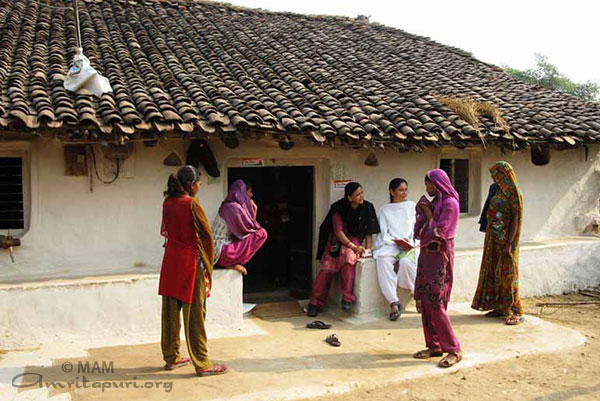 – Forming self-reliant groups of especially women and youth in order to tackle problems in all seven focus areas with MAM’s help.
– Combating practices such as consuming alcohol, chewing tobacco and eating gutka, by showing videos about the ill-effects of the same.
– Helping bring traditional knowledge about the uses of medicinal plants, rainwater harvesting and natural farming to the forefront and reviving such practices.
– Yoga and meditation camps for the village youth and children. MAM regularly teaches yoga and meditation at its centers, schools and university campuses throughout India. 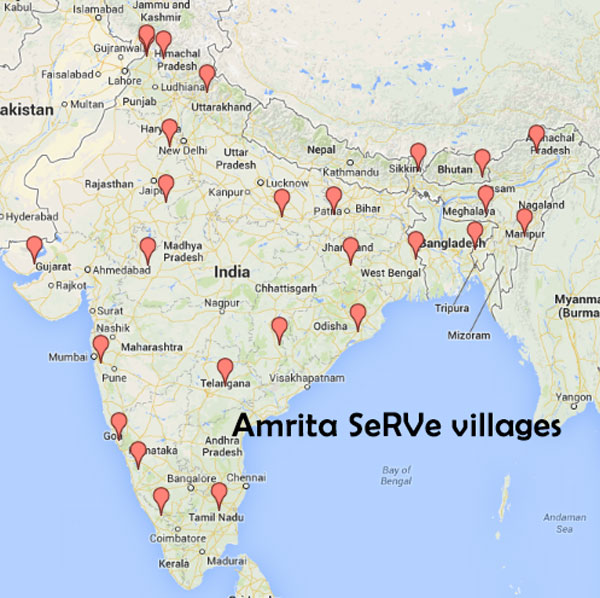