Amma concluded her North American Tour in Toronto, Ontario where she held one public program followed by a three-day retreat, including Guru Purnima, and ending with Devi Bhava.

On the first morning program, Amma was greeted by a group of children chanting Om Namah Sivayah as she walked from the escalator to the hall. 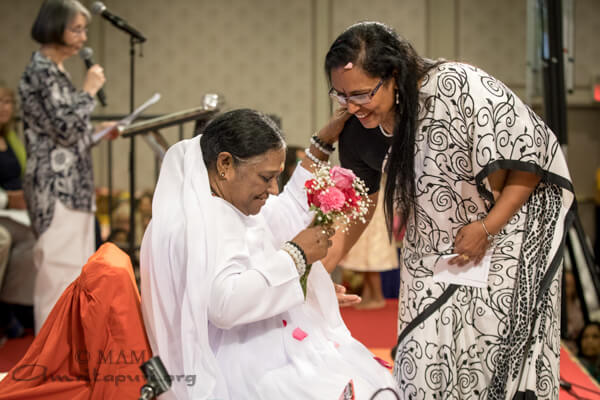 The three-day retreat was filled with many special moments. In addition to being the last stop of her the 30th visit to North America, it was also Guru Purnima.

During the retreat meditation and question and answer session outside, a light breeze blew as low-flying airplanes passed overhead on their landing approach. Commenting on the noise, Amma said for all to imagine the sound of the engines to be like Ma and Om in an effort to be in tune with everything.

One of the bhajans Amma sang was Iswar Tumhi in French. Many thoughts were brought back to 14 years ago when Amma began delighting devotees around the globe by singing the bhajan in their native language {news}.

Guru Purnima was celebrated. Swami Amritaswarupananda led everyone in chanting the Guru Stotram followed by Amma’s 108 names. Swamiji then gave a passionate and moving talk about how blessed we are to have Amma in our lives. “In a guru-disciple relationship, the most important factor is the trust and openness of the disciple, who is the recipient. The disciple should receive the guru’s instructions in his or her heart. The heart should become like a vessel, a womb to contain the guru’s teachings, because the guru’s advice is not just a cluster of words, but a part of the guru. It is part of the universe. The guru is the universe. Hence, to be a disciple is one of the biggest responsibilities.” As he finished, there was not a dry eye in the room, and everyone rose to their feet in applause. 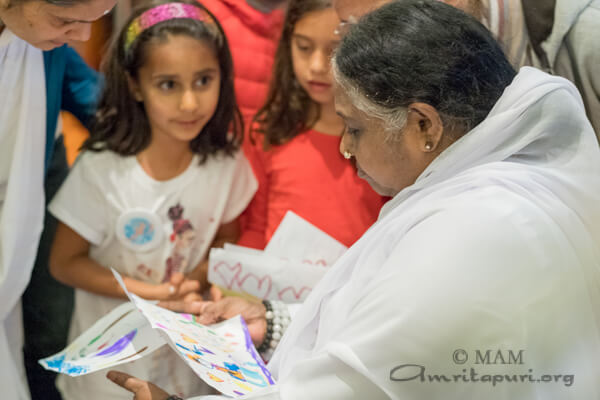 Cultural performances followed with traditional Indian dancing and local devotees singing bhajans in French. The evening was topped by a special dance by the tour staff. Divided into five groups representing ranges of years corresponding to when each person first met Amma, the groups danced to a bhajan representative of that time period. The grand finale had everyone dancing together in joy as Swamiji sang a rousing version of Mata Rani.

The last night was Devi Bhava. Just before the Atma Puja for World Peace, a small ceremony was held to honor Amma’s 30th visit to North America (Amma had visited Vancouver in 1987). Vinay (Dan Marshall) addressed the gathered crowd, reflecting, “Tonight has special significance because it marks a special occasion. This year marks the 30th anniversary of Amma coming to North America. It began in 1986 when Amma told her disciples, ‘My children are everywhere. They are crying for Amma, but cannot find me. Amma must go to them.’ “And thus, Amma began her first World Tour, in May 1987 — 30 years ago. There are quite a few people in this room who were blessed to meet Amma on that first tour – as a 9 year old boy, I walked into a living room and saw Amma sitting in the corner – and my first thought was, that is God in a human body. Over the past 30 years, that conviction has only deepened. Growing up with Amma, there were years when I grew distant from Amma and went my own way. One year I told my dad I wouldn’t come to see Amma because she sees millions of people every year and wouldn’t notice. Of course, when my dad went for darshan, the first thing Amma said is, “Where’s your son?” Amma remembered me because she came here for me. She has come here for each and every one of us, and she has kept coming, out of her bottomless love, compassion and selflessness, every year for the past 30 years.

“As Amma says, ‘An unbroken stream of love flows from Amma to all beings in the universe.’ For 30 years now, we have been the recipients of this love. For so many of us in this room and all across North America, we cannot imagine a life without it.” Devotees then garlanded Amma on behalf of all those who had first met her in Canada 30 years ago. They each then offered flowers at Amma’s feet. 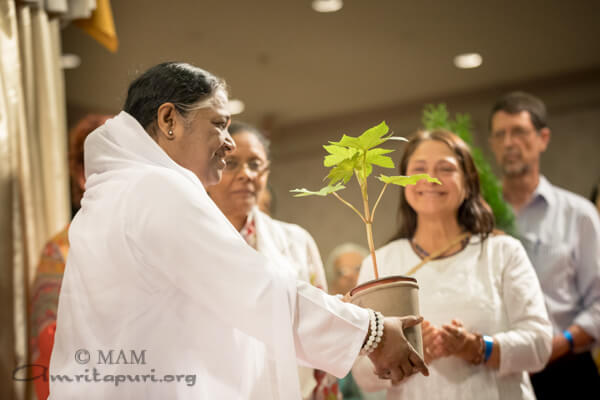 Amma also blessed maple and cedar saplings that will be planted at the MA Centre, Canada in Mississauga. The saplings were offered to Amma with the prayer that, “As these saplings take root in the soil of Amma’s ashram in Canada, let the seeds of love Amma has planted in each our hearts take root and become big flowering trees of compassion and peace.”
After the Toronto programs came to an end, Amma returned to Amritapuri. 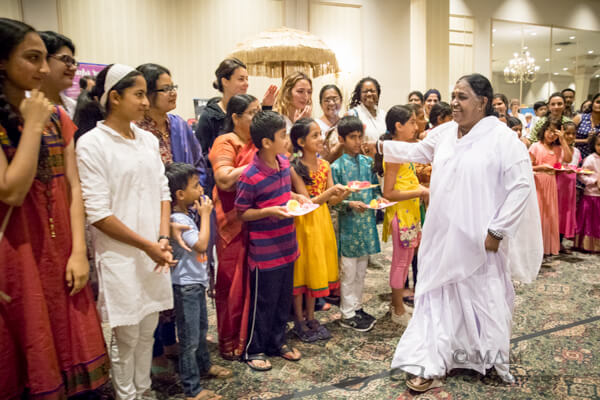 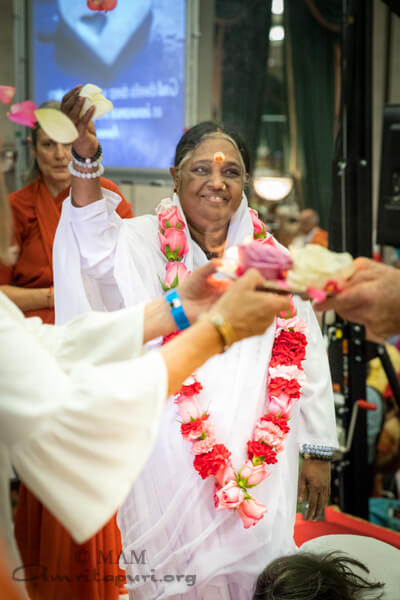 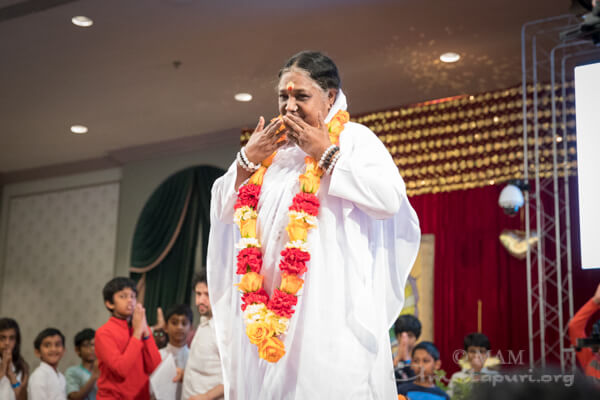 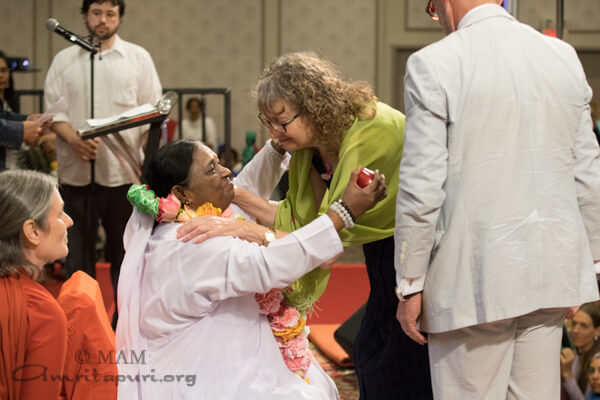 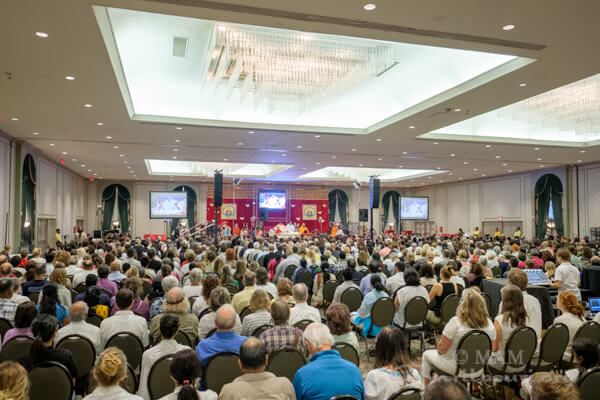 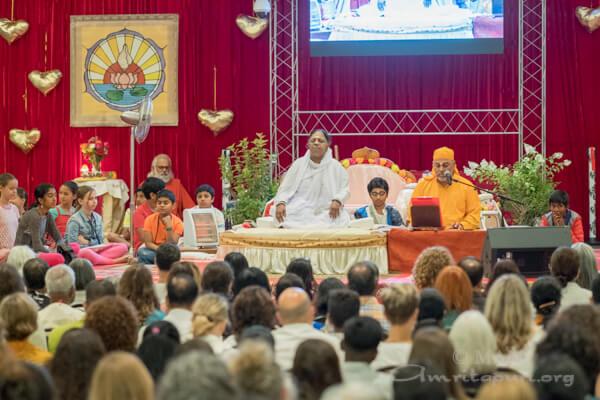 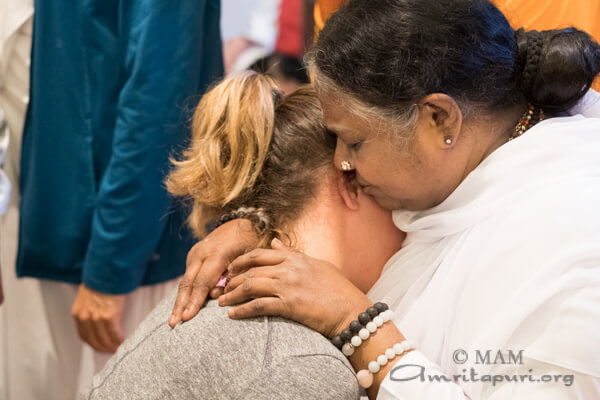 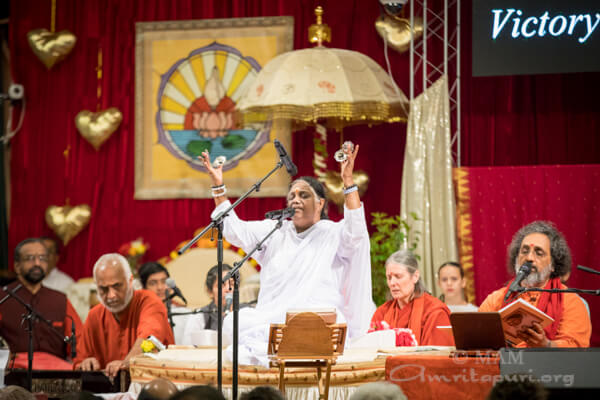 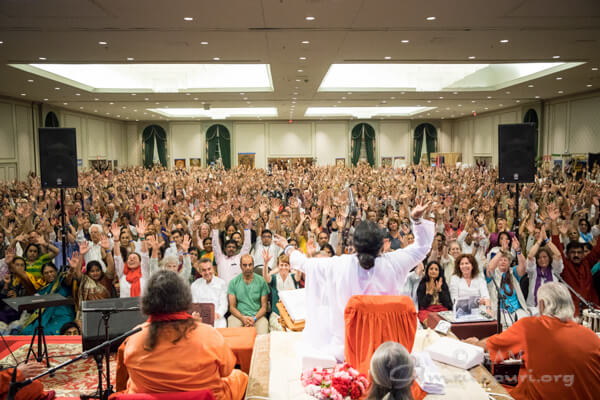 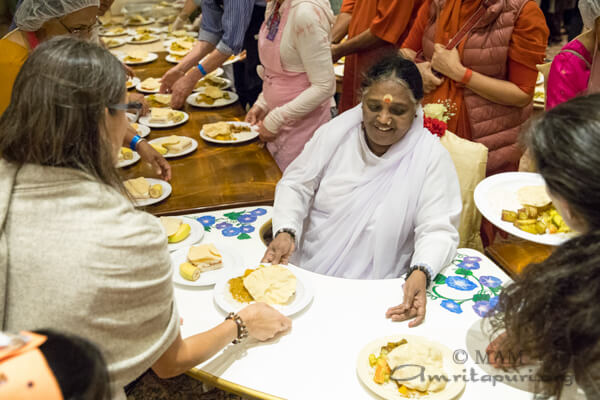 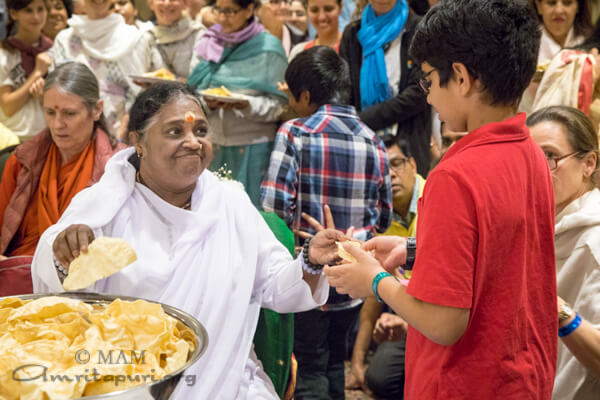 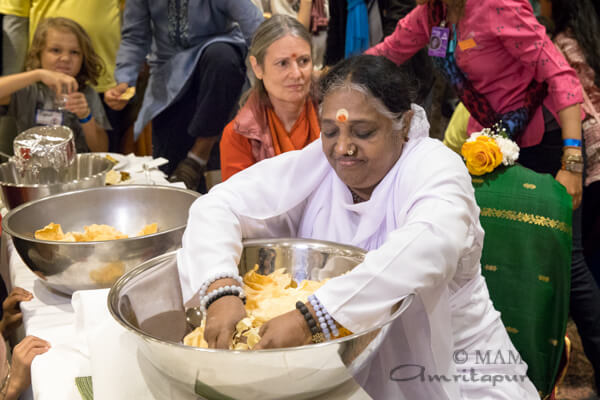 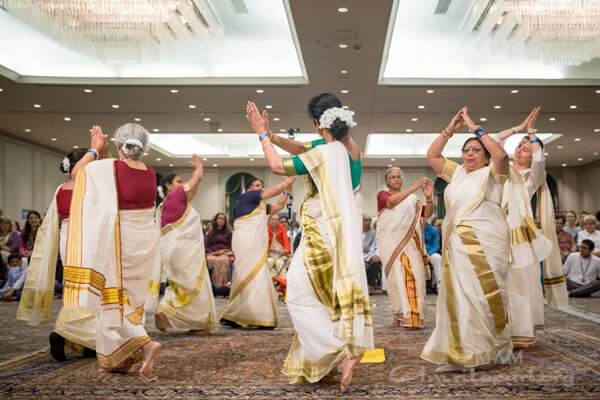 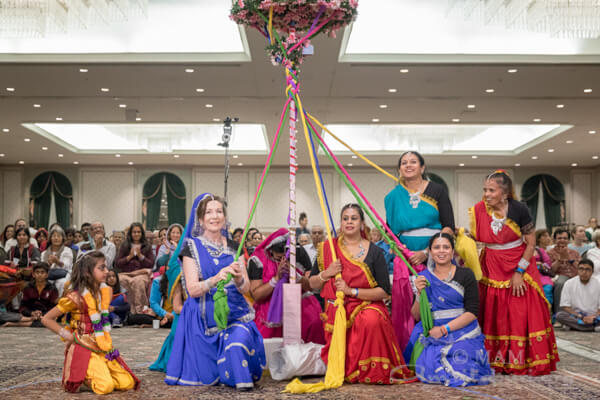