Service, though selfless, should be duly recognised and encouraged. If the knowledge, wisdom and talent of those who serve society are ignored and left to languish, it is society’s loss. In order to prevent such tragedy, the Mata Amritanandamayi Math has conferred its annual Amrita Keerthi Award since 2001, distinguishing people who have made significant contributions to Indian Culture and the Vedic tradition. 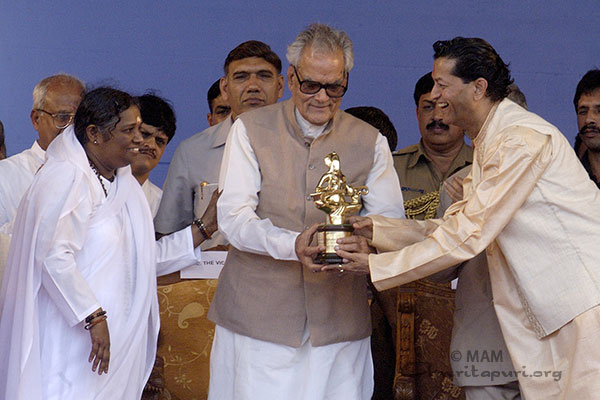 Two categories of people are eligible to receive the award: those engaged in writing original, in-depth studies of India’s spiritual texts and those dedicated to constructive social or national service. Sannyasins (Hindu monks) are not eligible for the award, as their service is part of their spiritual practices.

On the fourth day of Amritavarsham50, His Excellency the Vice President of India, Sri. Bhairon Singh Shekhawat, presented the 2003 Amrita Keerthi Awards to two eminent Indians who have spent decades researching, studying, writing about and teaching the texts and traditions of Sanatana Dharma. 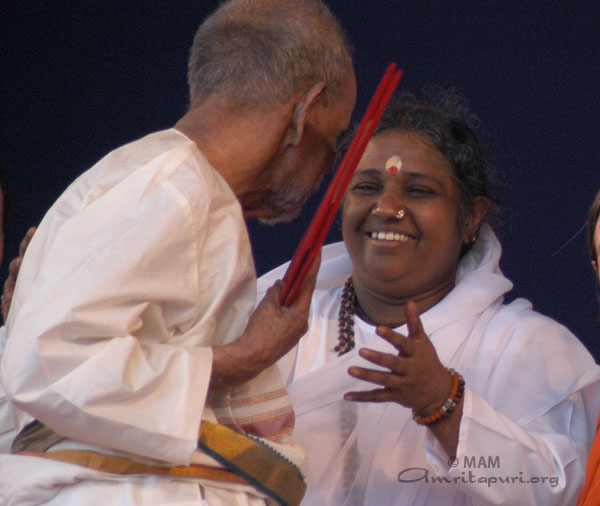 The Kerala-state-level Amrita Keerthi Award was presented to Prof. Harihara Shastri in recognition of his pioneering work in promoting Vedic teachings. Prof. Shastri was the Paramacharya of Shivagiri Brahmavidyalayam for seven years. He retired as professor from Trivandrum Sanskrit College in 1966.

The national-level Amrita Keerthi Award was presented to Dr. Shankar Abhyankar of Pune, who is the founder of Aditya Pratishtan, an organisation focused on promoting Indian culture and heritage. Dr. Abhyankar has written 30 books on Indian culture, and is the chief editor of the The Encyclopedia of Bhakti in three languages—Marathi, Hindi and English.

The Amrita Keerthi Award includes a cash prize of Rs. 123,456, a trophy and a Certificate of Commendation from the Mata Amritanandamayi Math. The cash prize rendered through this award is intended to support the recipients, helping them to be financially in the position to dedicate their lives to a larger cause.

The Math instituted the award in 2001 in order “to seek out and honour those deserving personalities who have helped to promote a healthy society through the preservation of the ancient and enduring human values of Sanatana Dharma.” It is the Math’s feeling that such individuals should be encouraged to pursue such activities in their chosen fields, thereby instilling in them a personal sense of fulfillment as well as fostering the cultural heritage of India.

Previous Recipients of the Amrita Keerthi Award include Kerala’s Shri. P. Parameswaran (2002) and Acharya Narendra Bhushan (2001). It was during Amritavarsham50 that the first national-level award was conferred.