A mass ceremony was conducted at Amritapuri this morning. Vavu Bali, as it is locally known, is a traditional ritual where oblations are offered to departed ancestors. The ceremony is performed on Amavasi (new moon) in the Hindu month of Karkidaka. 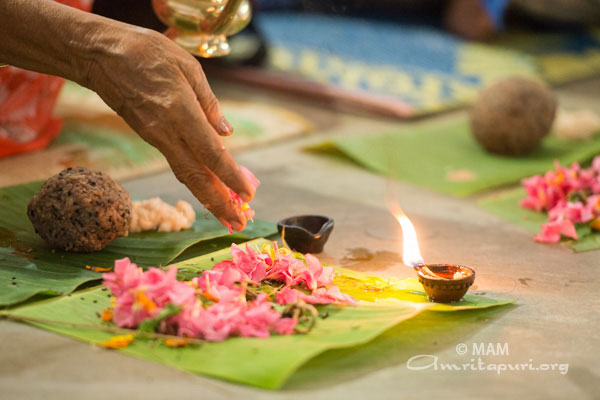 About 1500 devotees personally participated in this special Yagna, joined by thousands of others present at the ashram. Swami Turyamritananda lit the lamp to start the event, and various ceremonies were performed simultaneously in the Ashram’s Main Bhajan Hall and the Kali Temple, by Brahmacharis Tapasyamrita Chaitanya, Gurudas Chaitanya, and Shraddhamrita Chaitanya.

During the pujas, sweet rice was offered to all the departed souls, including forefathers and friends, as well as to animals and trees, along with the chanting of sacred mantras and prayers.

Step by step puja instructions were translated simultaneously into different international languages, allowing devotees from various parts of the world to participate.

After the conclusion of the ceremonies, the participants walked in a procession towards the shore to personally consign their offerings to the ocean. In this action, the fish in the ocean are also fed. Tharpanam, a ritualistic offering with water was also performed for the devatas (deities), rishis, and ancestors.

The ceremonies started at 7am and went on till around noon. 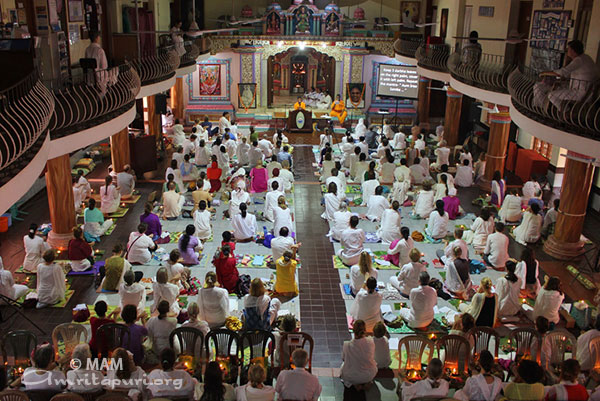 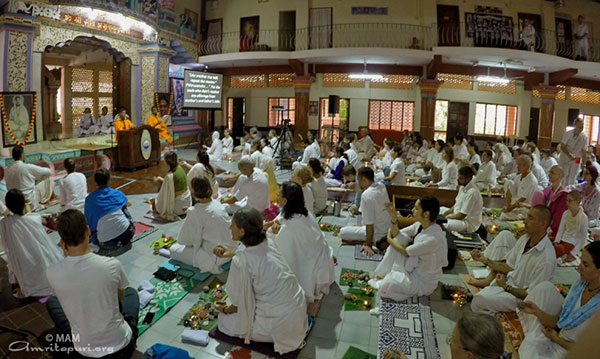 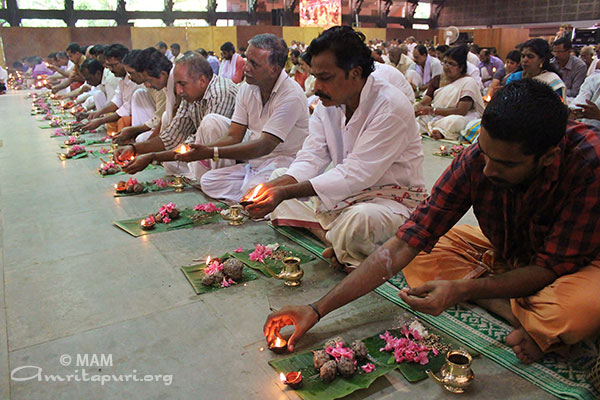 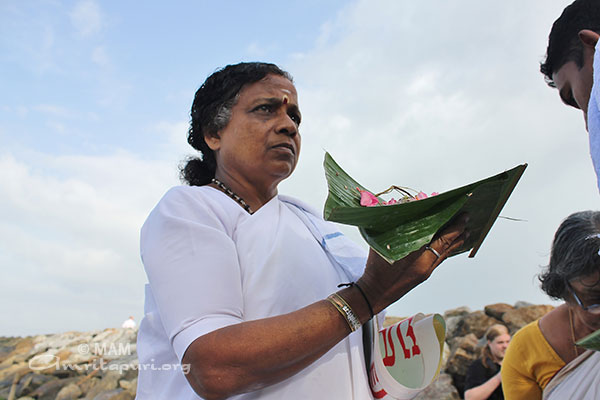 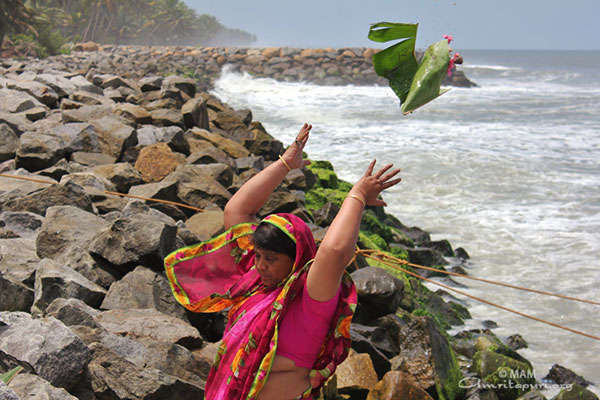 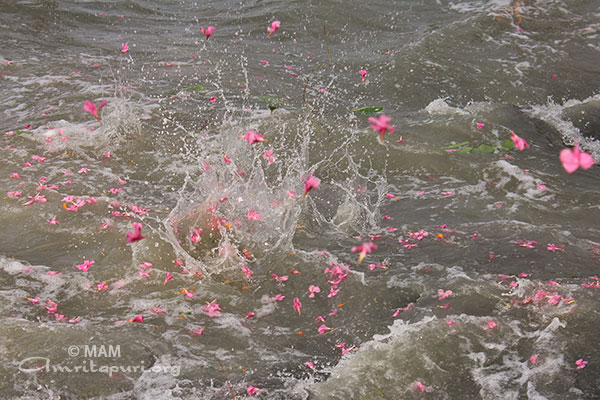 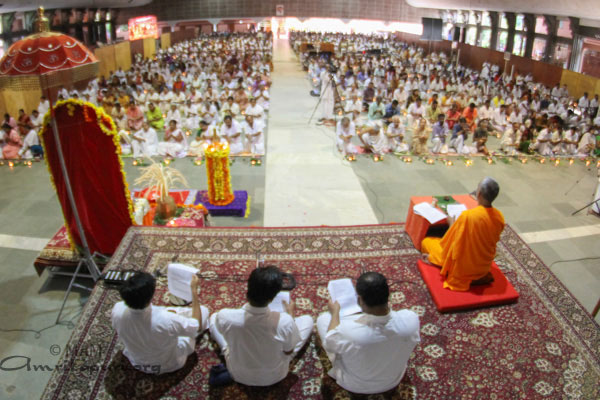 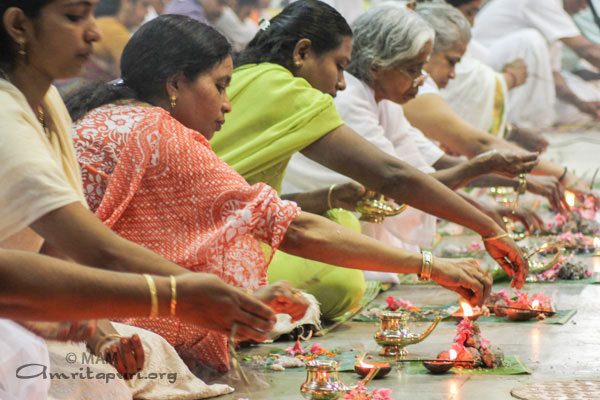 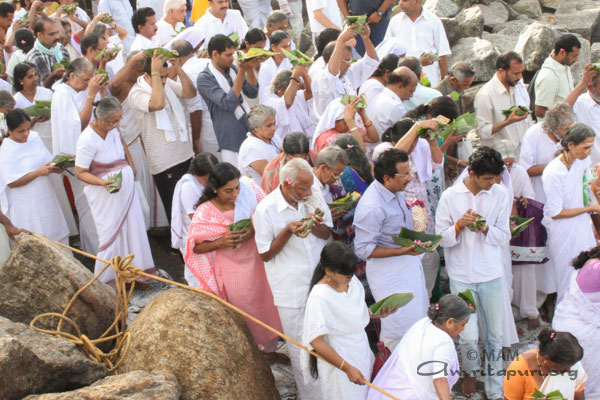 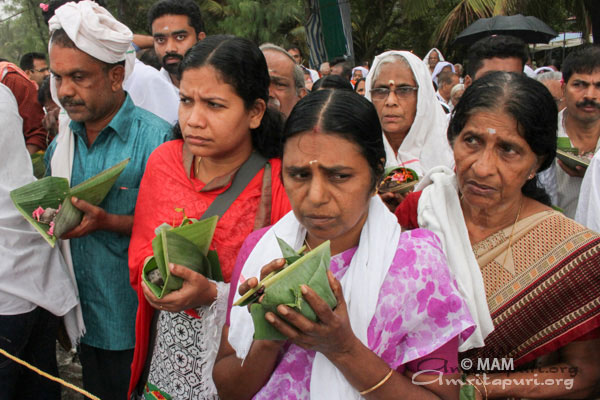 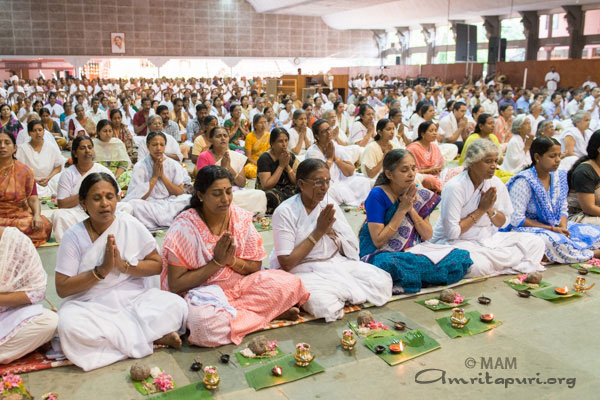 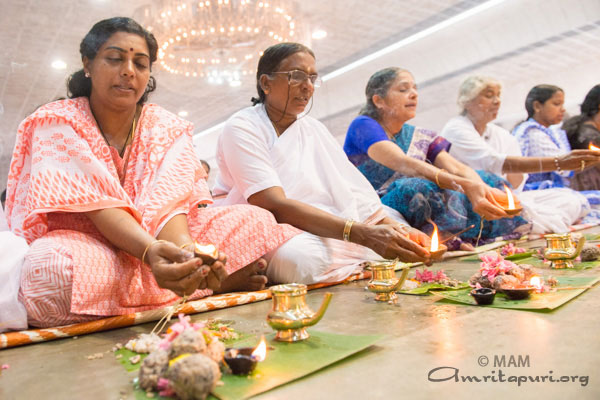 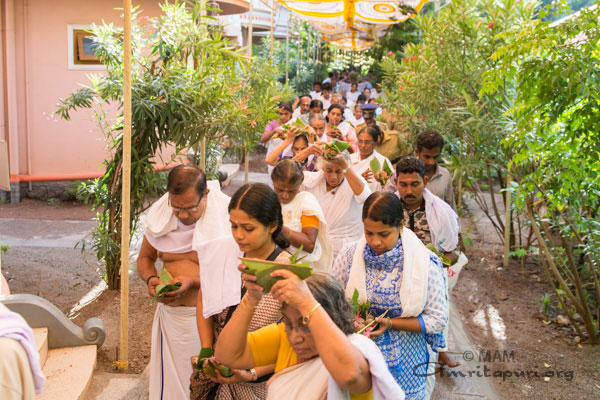 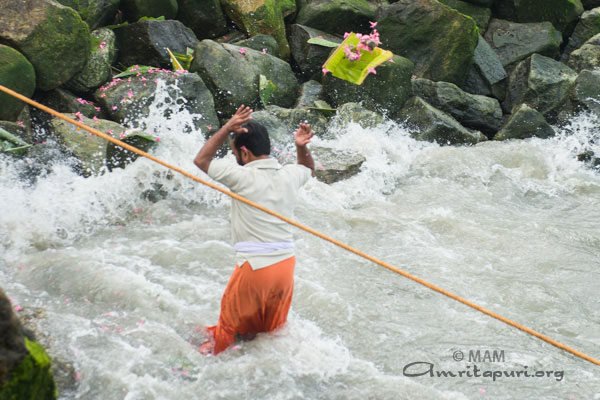 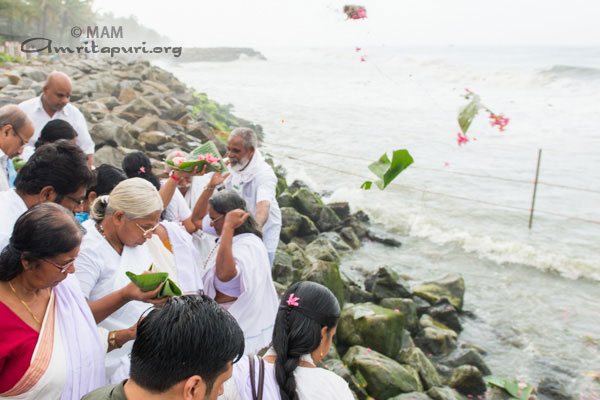 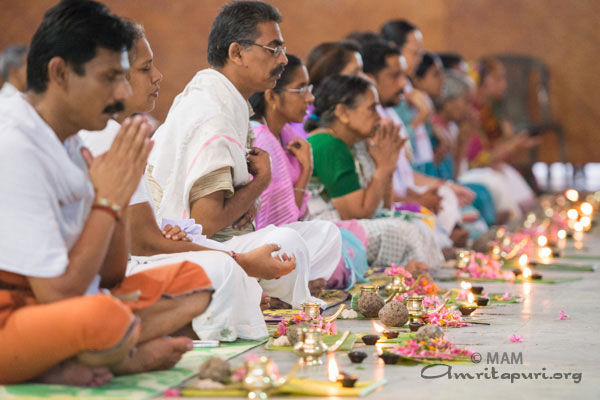 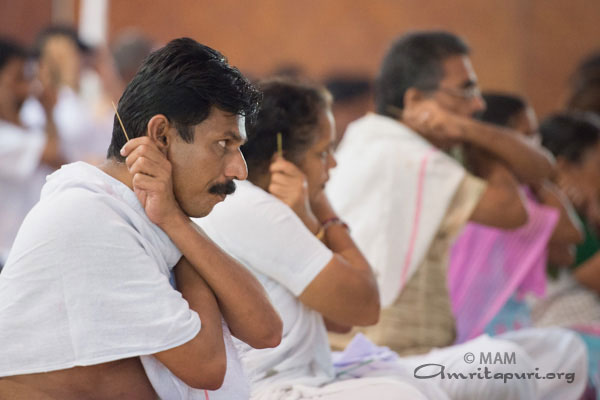 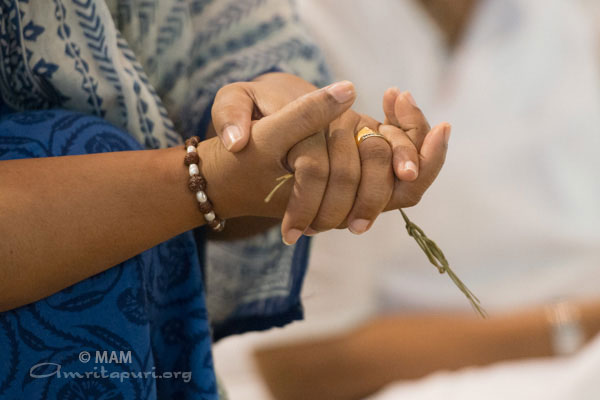 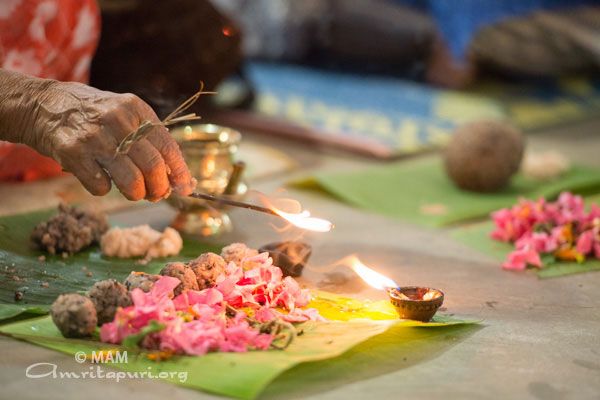 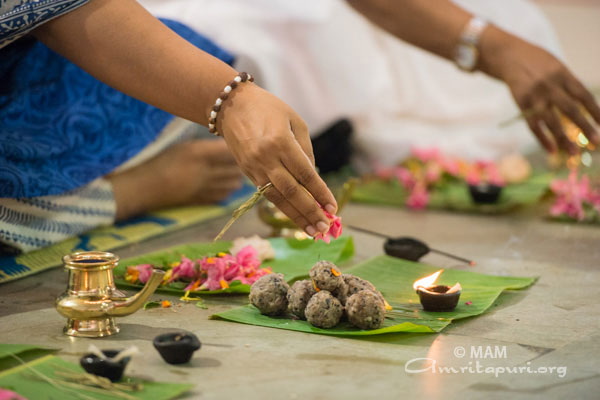 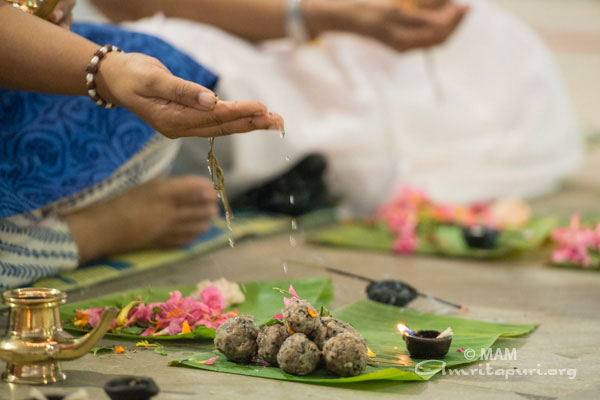 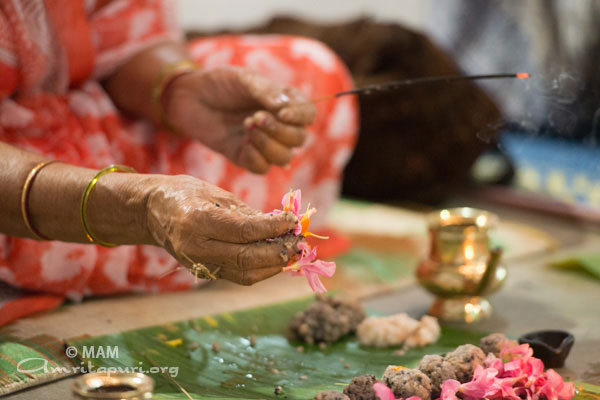 Later in the day, after the meditation session with Amma, one of the international devotees thanked all those who helped to conduct the Vavu Bali ceremony. In response Amma said, “We always have a thought of only getting, never of giving to others. We grew up because our parents have been giving to us. Now whatever we may give, we cannot repay for what they have given us. Through this ritual, we are showing our respect, out gratitude, towards our departed ancestors. Giving verbal thanks only remains as words, and doesn’t get translated into action. By partaking in this ritual, we are performing action – spending some time for others, spending some money for them, and chanting mantras. We therefore get purified, creating positive vibrations.

The people who have died might have taken a new birth or attained moksha. Even the remote villagers get their mail properly if the address is correct. You are even able to call him by dialing the correct mobile number. Or if the email id is correct, it will reach him wherever he is. Similarly, if your sankalpa is pure, when making offerings towards departed souls, the result will reach him/her even if he has taken another birth. In addition, we also get the benefit of the mantras and the good actions we do.

Actually, we have to show our gratitude to our parents when they are alive. This ritual is part of Sanatana Dharma, which believes in the rebirth. Whether you believe in this or not, whether they are reborn or not, we get a punya (merit) for the actions we do.

For each action there are two types of results. Drushta Phalam and Adrusthta Phalam – the seen and the unseen results. When we feed a hungry orphan, we feel the joy when we see him enjoying the food we have offered – that is drushta phalam. The result is visible. By giving food we get some punya – merit. That is the unseen result, adrusthta phalam. If you are a sadhak, all that you are doing is done selflessly, the whole world will benefit.”

Stating the example of some of the ashramites, Amma concluded, “If there is a Sannyasi in a family, three generations before and four generations in the future will receive the merit of his Sannyas.”