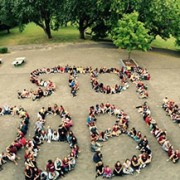 One of the main projects launched by AYUDH Europe during their 11th Youth Summit was the ‘RespAct’ project against (cyber) mobbing in schools. To ‘kick-start’ the initiative, on Monday 13th July, all 250 AYUDH members visited the Theodor Litt Schule, a middle school with 500 students in the town of Michelstadt in Germany. The school had recently reported a lot of cases of (cyber) mobbing and the faculty had been struggling to find a strategy to counteract this alarming development. AYUDH collaborated with the school and implemented the ‘RespAct’ project, aimed at nurturing a climate of respect, empathy and inclusion in the school. Over the past six months AYUDH members from the fields of psychology, education and social work had been working hard on this topic and a large survey with students and teachers was made to give a better understanding on how to address the problem in the most effective way.

The ‘RespAct’-event at the school began with the performance of creative skits by the AYUDH country groups and local students, highlighting problems associated with bullying and possible solutions. Lucia Rijker, the six time World Kick Boxing Champion, gave a stunning speech on how the value of ‘respect’ has helped her excel in the professional world of sports as well as in her personal life. She stressed on three aspects of respect, which she considered essential in creating a positive climate in school: respect for oneself, respect for the other and respect for the community. As a statement against bullying, all students, teachers and AYUDH members gathered for a group photograph on the schoolyard, forming the letters ‘stop mobbing’ (mobbing is the German for ‘bullying.’)

It was a great opportunity for some of the migrant students to open up and relate to an international group of young people, and discuss their challenges of integration and finding a cultural identity. The project was received with much acclaim. The local media covered the event widely. Mr. Stephan Kelbert, Mayor of Michelstadt, expressed his thankfulness to AYUDH for launching the initiative. 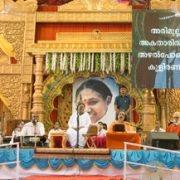 Balance life of happiness, health, and longevity: Amma in Palakkad 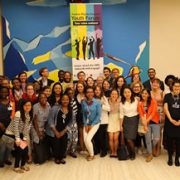 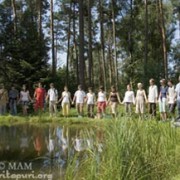 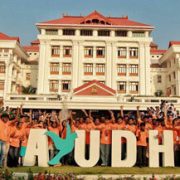 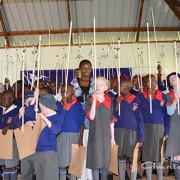 We are able to dream and dream big