16 Jan, Madurai, Tamil Nadu – Bharata Yatra 2015
It was almost 10 pm when Amma arrived at her Madurai ashram from Chennai. Amma distributed prasad dinner to her children and said, “You must have been hungry, haven’t you?” The devotees replied, “The hunger vanished when we saw Amma.” Amma added, “So, Anbu (pure love) satiated your hunger.” 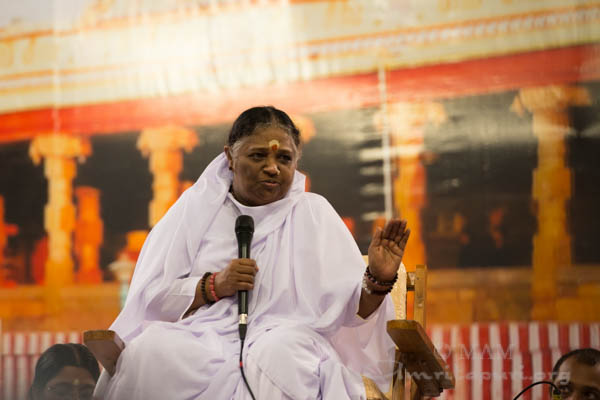 After serving prasad, Amma asked “What day is today?”

“Today is Maatu Pongal1 the devotees replied.
“So, yesterday was Makara Pongal2, right?”
“Yes!”
Amma looked at the lady sitting right in front of her and asked, “Did you eat Pongal3 today?”
“Yes, Amma” said the lady.
“Did you also bring some for me?” Amma asked with a mischievous smile.
The lady started shedding tears.
Amma asked why she was crying.
By now, her crying was uncontrollable. Her husband stood up and said, “Amma, I told her that Amma might ask for Pongal. I wanted her to make Pongal for Amma. But, as usual she disobeyed my words.”
Amma and the entire crowd burst into laughter.
Amma said, “So, Meenakshi is the ruler, correct?4” Once again the devotees responded with loud laughter.
The husband then added that due to her seva at the ashram, his wife did not find time to cook Pongal.
The lady said, “When my husband told me to cook Pongal for Amma, I thought, ‘Will Amma ever relish Pongal cooked by an insignificant person like me? Amma has millions of children all around the world all wanting to offer something more significant to Amma. My offering might be nothing compared to what others are giving.’
Amma corrected her, saying, “Please don’t think that way. Nobody is insignificant to Amma. Selfless service is the real Pongal. While you were doing seva, you were constantly thinking of Amma and that is the real Pongal. Amma had already relished it.”
Through this simple yet meaningful incident Amma not only revealed that she is always with her children, constantly aware of their words and thoughts, but also that every act of selflessness and pure love reaches her directly.
– Sakshi
—

1. a festival in honor of cows

4. though Meenakshi refers to the goddess of the Madurai Meenakshi temple, Amma meant to say that the wife was dominating the household.