Indian Ambassador for Italy; H.E. Mr. Rajiv Dogra, welcomed Amma to Italy. “The goodness of heart is the most important thing in life and in this respect I think Amma is unique, because by setting up all these hospitals she is not only spreading love, not only curing heart, but she is also bringing smile to the faces of people who deserve it most, the poor people.” 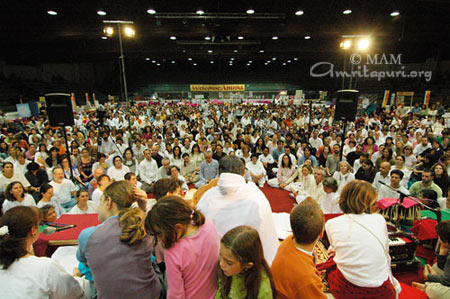 Amma was also welcomed by Giorgio Oldrini, President of the City Council (Mayor) of Sesto San Giovanni, the suburb of Milan where the programmes were held.

Italian TV personality Paola Barale came for Amma’s darshan. In an interview after her darshan, Paola commented that, “It was a very good experience; New …strong …and important.”

Irene Grandi, a famous Italian Rock-singer, came for Amma’s blessings as well. She spontaneously gave a short performance on stage to the delight of the crowd. In an interview afterwards she said about her Darshan with Amma, “It was an experience which I will never forget.”