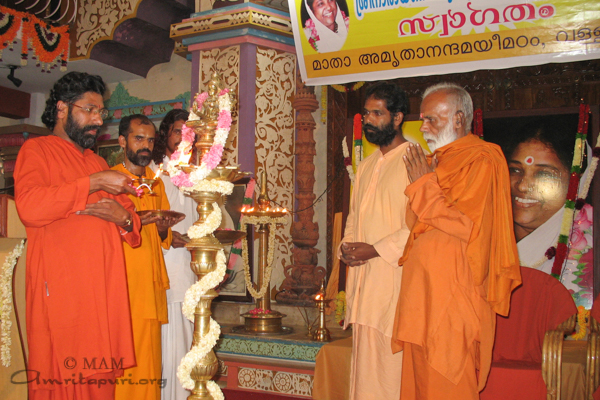 Today, hundreds of Ashramites gathered in front of the Main Temple to welcome the arrival of an ‘eternal flame’ from Sivagiri. Under the initiative of the Sri Narayana Guru Dharma Sangha, the flame has been visiting holy sites throughout Kerala for the past month. It arrived at Amritapuri on a platform mounted inside an elaborate vehicle/chariot that contained an altar and a statue of Sri Narayana Guru as well.

Just last month, Amma had been invited to the Sivagiri Math {news} to light the flame and inaugurate the pilgrimage. The lamp was lit from the eternal flame that is burning at the Samadhi of Sri Narayana Guru.

Sw. Turiyamrita performed Arati and garlanded the statue. He then lit a small lamp from the sacred flame, and brought it into the Temple where a special ceremony was held. Br. Dhyanamrita welcomed the pilgrims on behalf of Mata Amritanandamayi Math. The ashram residents then sang a bhajan. 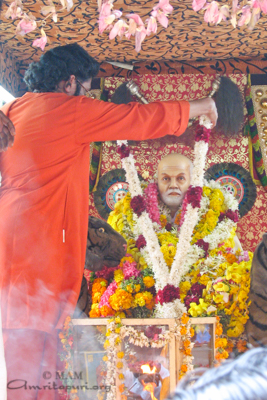 Swami Sandra-ananda of Sivagiri Math said that he had seen Amma’s influence on the masses during the pilgrimage with the flame throughout Kerala.

Swami Narayana-ananda and Swami Sandra-ananda, along with two Brahmacharis and about 100 pilgrims, have been traveling with the flame on the pilgrimage. After the ceremony, all were giving a sumptuous meal served by the Ashram Brahmacharis.