5 -7 November 2007, Barcelona, Spain — Europe yatra 2007
Local devotees welcomed Amma with a cake – marking the tenth anniversary of Amma’s visit to their city. World-renowned cello player Lluis Claret and his family performed for Amma. After receiving darshan he commented, ‘I felt immediately a great great inside peace and serenity. That’s what she gave to me.’ 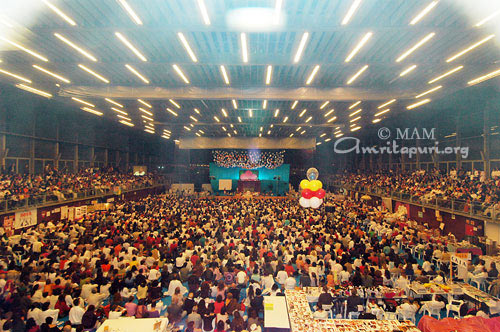 Public Defender and Civil Rights Protector, Fernando Oteros came for darshan. He said, “This a very emotional experience for me. For many years, nobody gave me that kind of love and sincerity. There are many people who make promises and use a lot of nice words, but Amma, without speaking, truly transmits tranquility, and I leave with that satisfaction today.
As Amma was leaving the hall after the final programme, in what has become a tradition in Barcelona, people spread out their shawls on the floor to make a colorful carpet for her to walk on.

The devotees presented her with 10 balloons, each with the the number 10 written on them. They were for the 10 consecutive years that Amma has come to Spain. Amma held the balloons for a moment and set them free into the Spanish sky.