Today marked the second time in 15 years that Amma has been in Amritapuri for Guru Purnima, the day of paying homage to the lineage of Guru. And as Amma only arrived in India three days ago, it is as much homecoming as holy day – with thousands of devotees taking their first darshan of guru and mother in two months.

The program started in the morning around 8:45, with Swami Amritaswarupananda giving satsang in the new hall. An hour later, Amma came to the stage, taking a seat on a chair draped in sea-green silk. 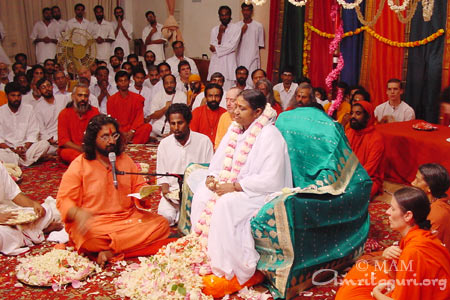 Soon Swamiji began the pada puja, doing abhishek to Amma’s feet with water, milk, honey, ghee, curd, coconut water and rose water. Then he applied Amma’s feet with sacred ash, sandal paste and kumkum. Next on Her with sandal and kumkum between Her eyebrows. Finally he placed a magnificent garland of full lotus flowers – pink and white – around Amma’s neck. It spilled past the floor; it’s center residing at Amma’s feet.

Soon Swami Amritageetananda began chanting Amma’s Dhyana Sloka and Guru Stotra; then Swamiji commenced with the chanting of Amma’s 108 names. The packed hall reverberated with the sacred response of “Aum Amriteswaryai Namah.” As Swamiji covered Amma’s feet with lotus petals, which by the end reached Her knees, the brahmacharis, brahmacharinis and devotees in the hall showered Her with the subtle flowers of the hearts. Some saw Guru, some saw Mother – the embodiment of so many spiritual ideals was clearly before the devotees, many of whom were shedding tears.

Next the arati was performed. Swamiji was first to wave the burning camphor before Amma’s silent form. He was followed by Swami Turiyamritananda and Swamini Krishnamritaprana. Then Amma was garlanded by all of Her sannyasis. As those garlands were rested around her neck, She became verily buried in flowers. Finally Amma’s own mother and father also garlanded Her.

Amma then gave satsang and led a short meditation. She then called for what was sure to be a full day of darshan.

Let us all offer flowers to Amma’s Lotus Feet on this holy day.