It took five minutes for Swamiji to perform the pada puja for Amma on Guru Purnima. It took 10 minutes for him to chant Amma’s 108 Names and, handful-by-handful, to cover our Guru’s Feet in flower petals. Five minutes after that, all Mother’s swamis and swaminis had garlanded Her, and so had both of Her parents — whom She then rose to embrace. 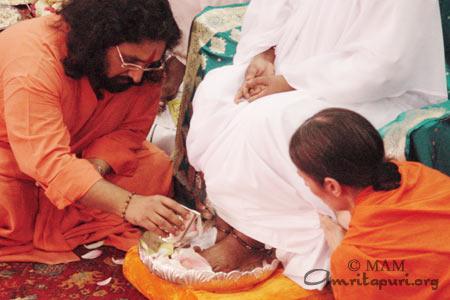 So it took basically 20 minutes for the rituals of Guru Purnima to be accomplished.

But the day had not ended. It was just beginning. 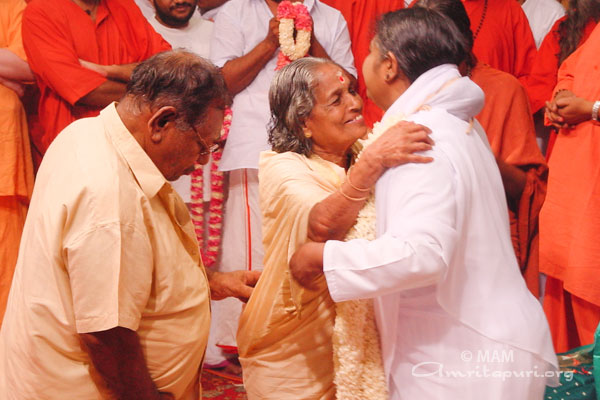 From the chair where She sat for the rituals, Mother moved forward to a low peetham near the front of the stage. There, after prostrating to the thousands of people in attendance, She delivered a satsang on the nature of the Guru. In that talk, She spoke of lessons She had learned from her own mother, Damayanti Amma. “Though she didn’t have any spiritual understanding, she was able to guide me,” Amma said. Damayanti Amma might give some strict directive, and Amma would find a spiritual principle in it. For this reason, Amma explained, She sometimes calls Damayanti Amma Her guru.

One of Damayanti Amma’s teachings, Amma said, was: “Never say, ‘This much work is enough.’ Always say, ‘Give me more work.’ So I used to pray to God to give me more of his work.”

For the rest of Wednesday, the 24th of July, Guru Purnima, Amma showed (as She has so many times before!) that She took this lesson to heart.

After 10 minutes’ guided meditation, She again stood, the low peetham was exchanged for the darshan bench, and She sat and began hugging.

Hugging is work? One remembers a reporter back in America, who, hearing of “The Hugging Saint,” said, “Hugging? Who couldn’t do that? Heck, I could hug people for a living…” He changed his song after he watched Her.

Amma doesn’t just hug. She holds you close, and whispers an endearment. She listens, as you ask a question, or pour out an emotion. When you need advice, She gives it; when a scolding is in order, She delivers it — and softens it with laughter and another hug. Squirming babies are handed to Her, and She holds them in one arm while drawing their parents close with the other. She bows to let someone garland Her, then removes the garland in time for the next person to offer another flower mala. A heavy man is being helped to rise after his darshan, and leans his weight on Her knee; a child hurls herself against Amma’s legs and demands a sweet; a woman approaching on her knees inadvertently kneels on Amma’s Foot, and the next person, thrilled to be in the arms of the Compassionate Mother, hugs Her with all his might; the next person’s cheek collides with Amma’s right cheek — the one with the perennial bruise. (About eight years ago when this bruise began to develop, someone asked Amma about it. Smiling and stroking it, She said, “Children’s prema. Children’s love.”)

Throughout, Amma smiles, scolds, comforts, jokes, advises, laughs, cries… gives whatever response is suited to the person in Her lap at the moment. And along with all this, She is conferring with an AIMS Hospital official sitting to Her right, beside the bench, and acknowledging the presence of a devotee who has the privilege of handing Her prasad from Her left side — a different devotee each minute-and-a-half. She is listening to the live bhajans being sung, leading applause for the little child who sings for Her, and hurling a handful of sweets at the tabla player who has missed the beat. Her ever-watchful eyes are attending to everything going on in the hall: an elderly man has no place to sit comfortably, and She calls a brahmachari to lead him to a chair; some people are being told it is too late to join the queue and She sends word to let them come to Her; a devotee from far away finds no place to sit on the stage near Her, and She directs some ashramites to move, making space for such visitors. All this, and every few seconds a new person in Her lap. 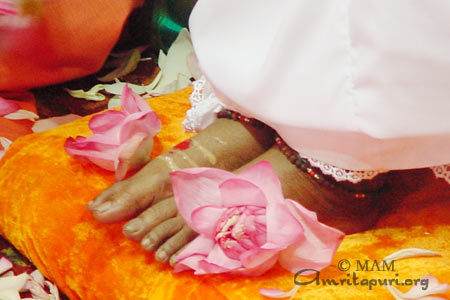 This goes on until all who have come for Her darshan have been hugged. On this Guru Purnima day, that meant 10 straight hours. Evening bhajans were held while the hugging continued, and at 9:00 the arati lamp was being waved in front of Mother, still on the darshan cot, while She washed Her Hands before feeding a child its first rice.

Less than half an hour for the rites of honoring the Guru; 10 hours for the Guru to bless and serve Her children.

But never mind; Amma was getting Her Heart’s desire. For here is something else that She said in Her Guru Purnima satsang: It is better to get worn out rather than rust away. This is what Amma desires.