Ganeshotsav was celebrated in Amritapuri with great enthusiasm and devotion. The celebrations commenced on the morning of September 10, 2002 with Gaja Puja (worship of the elephant) in the new prayer hall. The ashram elephant Ram – adorned with sandle paste and the traditional golden head ornamentation – was worshipped as the form of Lord Ganesh. During the singing of the Ganesh Arati, Ram rhythmically swung his trunk and ears, enthralling everyone in attendance. He was later fed with a plateful of modaka (a sweet of which Lord Ganesha is said to be fond) and payasam (sweet pudding).

An idol of Lord Ganesh also was installed for worship near the ashram’s old temple shrine. Pujas were held there for five days, with the traditional arati, “Om Jai Gananatha Hare,” in the evening. On the fifth day, a grand procession brought the idol to the beach on a decorated cart, where it was immersed in the ocean (Ganapati Visarjan).

The throng of devotees and ashram residents was accompanied by pancha vadyam (traditional Kerala temple music) and devotional singing. The atmosphere resounded with the chant “Ganapati Bappa Moriya.”

In the Hindu tradition, Lord Ganesh holds a very important place. He is first worshipped before the start of any activity. He is extolled as the ‘Remover of All Obstacles’ and as the ‘Bestower of Auspiciousness.’ Immersing the idol signifies the importance of going beyond the realm of name and form, and merging with the Supreme Consciousness. 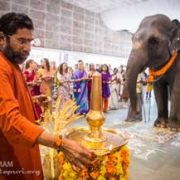 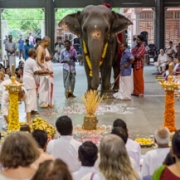 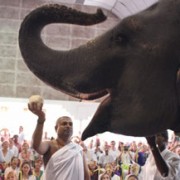 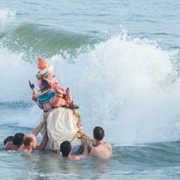 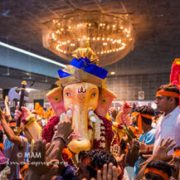