Blog - Latest News
You are here: Home / Ashram Life / Restoration of the Kalari

The Kalari is the small temple where Amma first started giving darshan consists of a tiny inner shrine room and an outer-covered veranda where Krishna Bhava used to be held in 1975. Bhajans were sung every evening.

Over time, the roof made of coconut tree planks became unstable and the concrete floor of the inner temple developed holes which ants had penetrated, making it very difficult to clean.

In March 2000 it was decided to restore the temple. The old roof was removed entirely and replaced, and the inner temple received a new, highly polished granite floor. The beautiful, ornate timber doors leading to the shrine were restored to reveal rich honey-coloured Anjili wood.

The work was finished on the eve of the Vishu Festival (Kerala’s New Year Day) on April 14th, 2000. The doors received brightly polished with brass ornamental bells and the mirror-like floor was painted around the edge with a beautiful motif. Beautiful mandalas were painted on the floor.

At 4:00 in the morning devotees filled the tiny veranda. The atmosphere rung with the holy sounds of the gong and conch announcing that the deities were waiting to bestow their blessing. Krishna, surrounded by the fruit and flowers of His of creation, was magnificently displayed in two majestic statues, whilst Amma’s benign smile showered down on all from the huge portrait on the altar. 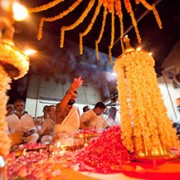 The Glorious Legacy of ‘Sanatana Dharma’