The following is the speech delivered by Amma before an audience of spiritual leaders and dignitaries, on the morning of the 4th of September, 1993, when the Hindu Host Committee honoured Her, by selecting Her as one of the three Presidents of the Hindu faith:

The great saints and sages of India who were the exponents of Sanatana Dharma have never claimed anything. Ever established in the supreme state of absolute fullness, they found it difficult to express the experience of the infinite Supreme Truth in words. They knew that the limitations of language would never enable a speaker to paint an adequate picture of the Truth. Therefore, the great ones always preferred to remain silent. Yet, out of compassion for those who are searching for God and those who are groping in darkness, they did speak. But before they spoke, they prayed thus: 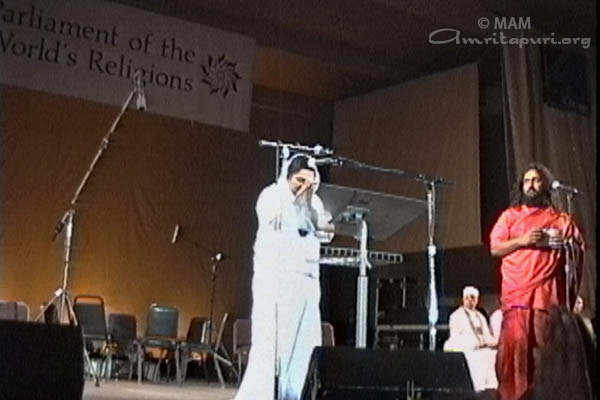 It is the duty of each one of us to transmit this great experience of the saints and sages to the world. It is very important that we respect the feelings and the faiths of people of other religions. But at the same time, we should also let the world know that the eternal Sanatana Dharma is not confined to certain individuals; it is a pure subjective experience of great importance to every human being. Everyone is the embodiment of this great Truth. Sanatana Dharma does not pertain to any particular caste, creed or sect. The world should know this. Truly, Sanatana Dharma is a great source of power and inspiration for all of mankind. As such, its followers should constantly work for the peace and harmony of the world. Only then will the sankalpa (resolve) of the Rishis become a reality.

The Rishis did not form a separate religion. They gave importance to different human values and spiritual truths. That is why their prayers, such as the following one, included the entire universe:

Once, a sannyasin was invited by a widower to pray for the peace of his wife’s soul. The sannyasin began to pray: “Let everyone be happy; let there be no sorrow; let auspiciousness fill the entire universe; let everyone reach perfection, etc.” The husband who was listening to the prayer became upset by this. He said to the sannyasin: “Swami, I thought you were going to pray for my wife’s soul, but I haven’t heard you utter her name even once.” The swami replied: “I am sorry, but I cannot pray like that. My faith and my Guru have taught me to pray for everyone, for the entire universe. In truth, only by praying for the good of the whole world will the individual be benefited. If you water the branches of a tree, the water is wasted. It is only when the roots are watered that the nourishment reaches the branches and leaves of the tree. Only if I pray for everyone, will your wife receive her blessing. Only then will her soul find peace. I cannot pray in any other way.” The swami was so convinced about this, that the husband had no choice but to yield to his wishes. The husband said, “All right, you can pray as you like. But can’t you at least exclude my neighbor from your prayers.” This is the prevalent attitude among the people of today. We have lost our ability and willingness to share.

When the cold war between Russia and America ended, there was a great sigh of relief throughout the world. With the commitment to end hostilities, the threat of a nuclear war, which could potentially destroy the world, was removed.

Now for the first time, families who were separated by the artificial boundaries of different political ideologies have been reunited in the spirit of love which had always bound them. Of course, there are pockets of people involved in the manufacturing of weapons of destruction, people who are only concerned about their selfish ends.

The sole purpose of nature is to support creation. We should have faith and trust in this. We ought to search for alternative peaceful ways to earn our livelihood, rather than destroying one another for the sake of self-aggrandizement.

Merely going to temples, churches or mosques and performing worship does not constitute the whole of religion or devotion. We should be able to behold God, the Self, within ourselves and within all beings.

This is the dawn of the 21st Century. Here and now, let all the great sannyasins, spiritual leaders and the Hindu host committee, who worked so hard for the success of the religious Parliament, take the following oath, at least mentally:

“Regardless of time and place, we will work hard for the peace and harmony of the entire world, and to alleviate the suffering of humanity. In this way, let the great sankalpa of Sanatana Dharma become a living truth. And let us be determined to transmit this great Truth, and the essential principles of life, to all young men and women. They are the flower buds of the future generation, about to open and become the fragrance of the world.”