With the coming of Tiru Onam, thousands of people came to Amritapuri in order to celebrate. The bhajan hall was filled with smiling people dressed in new clothes. The feeling of celebration was in the air. 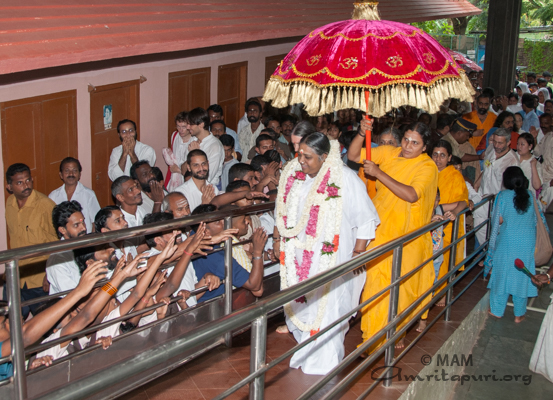 Amma came to the dais to the sounds of panchavadyam around 11:00 am. After offering her pranams to all assembled, she began her Onam satsang. “Onam—the symbol of happiness and contentment—has come once again,” Amma said. “We can clearly see the impact of modern life on our Onam celebrations. Even so, the sankalpa [divine resolve] that Onam should be a time of forgetting everything and rejoicing endures. It is for this reason that Onam continues to be the festival most dear to the hearts of Malayalis.” 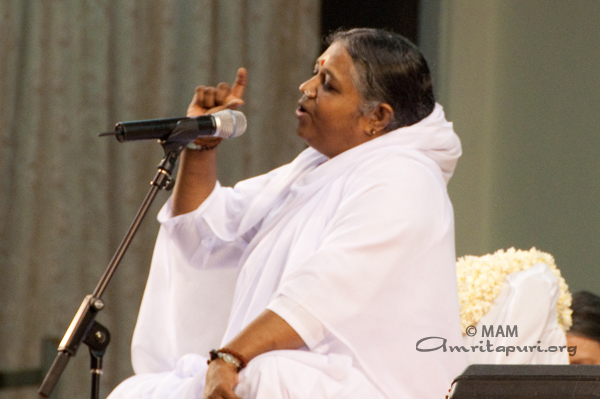 Amma said that the message of Onam was the importance of approaching everything with an open mind. Amma said this message was especially important today because currently everywhere one looks there is hostile aggression, competition, hatred and selfishness everywhere we look.

“Perhaps there is no other festival like this in the entire world,” Amma said, looking down at all the devotees. “During Onam, irrespective of age, everyone becomes like a child. Another message Onam carries is that ‘Innocence is the substratum of happiness.’ Onam is the time when the child’s heart innate in everyone awakens and expresses itself.”

Amma then spoke about true leadership, saying that it lay in putting the comfort and needs of others before yourself. “There is nothing wrong with becoming a king and ruling, but one should be able to serve people selflessly with the attitude of a servant,” she said. As examples of such leaders, Amma mentioned Sri Krishna, Sri Rama and other mahatmas. She added that Mahabali was also able to become such an expansive ruler, because he converted his demonic qualities into divine ones and always put the Lord before him. 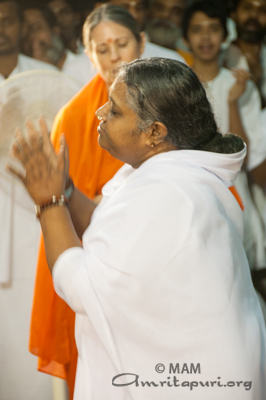 Amma then explained the significance of Mahabali offering his head as the final place for Lord Vishnu to place his feet. “The seat of the ego is the head; the centre of love, the heart,” Amma said. “When the feet of Vishnu are placed upon our head, the heart overflows with divine love. The ego is driven down into the netherworld. Then one becomes humbler than the humblest. The way Mahabali ruled his kingdom was by keeping the Lord before him. His acceptance of the feet of the Lord on his head is symbolic of his surrender to the Lord’s will—bowing down before him. This is the reason why his kingdom was the abode of peace, equality and prosperity.”

Amma ended her Onam satsang by stressing the importance of putting the spiritual teachings into action and expressing them in our lives: “Let us become able to grow mentally, to create a little space for others in our hearts, and adjust to them as our fellow travellers. May celebrations like Onam help us to achieve this goal.”

Amma then celebrated the occasion by singing a “Hari Bol Hari Bol” and dancing to “Bolo Bolo Gokula Bala.” When this was finished, she called all the thousands of devotees forward to receive a plate of Onasadhya—the traditional Onam feast—directly from her hands including Ram and Lakshmi, the ashram elephants.