Br. Shubamrita Chaitanya visited Gabarone, Botswana from February 2 to 4th 2009.
A public programme was held at the residence of a devotee on the 3rd evening. Br. Shubamrita addressed the gathering on the topic- “Finding the Inner Silence”. Among the guests who attended the programme was Mr. V.N. Hade, Indian High Commissioner to Botswana.

On the 4th evening, Br. Shubamrita held a refresher course for all the IAM Meditation practitioners in Botswana.

During his stay, the GABZ Radio station conducted a half an hour interview with Br. Shubamrita on the topic – “Spirituality and Health.”

The citation was read aloud by the president of JCI Calicut Chapter,Jaygopal Chandrasekharan.

In his speech, Jaygopal Chandrasekharan said that Amma was selected for the award because she championed the causes of peace, love, spiritual freedom and justice among humanity amidst strife over caste, creed, color, language and gender.

Accepting the award Amma said “As far as Amma is concerned Her children are her award. Amma accepts the award as a symbol of the dedication and love of the Jaycees towards Amma. Amma wants to rededicate this to her beloved  children. But the true award to Amma would be if all of her children would make some space in their hearts, have some compassion for those who are suffering in the world. If that were possible we could make this earth into heaven.”

AYUDH Mumbai organized a blood donation camp in association with Pooja blood bank of Mulund for thalassemia patients camp on 25th January 2009. More than 50 units of blood was collected for this noble cause.

Thalassemia is an inherited blood disorder that causes the body to produce less hemoglobin. Low levels of hemoglobin may cause anemia, an illness that makes you feel weak and tired. Severe cases of anemia may damage organs and result in death.

People with severe anemia (beta thalassemia major) usually will not live into adulthood without treatment. If the child starts receiving blood transfusions early and continues to receive them throughout life, he or she is likely to live longer. 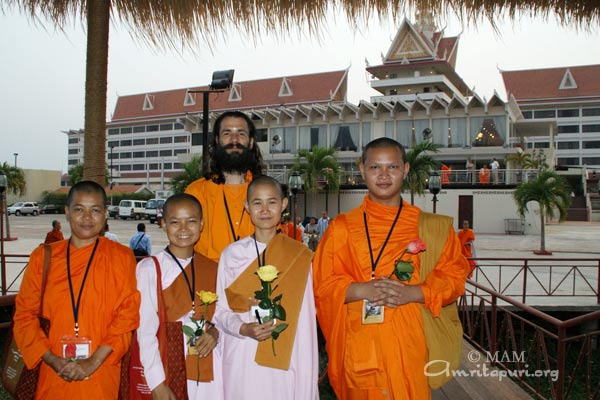 Br.Shantamrita Chaitanya spoke at the University of Guam on the topic “Ancient Wisdom Applied in Today’s World.”

He said “there is a whole wisdom tradition that really exists all over the world that we should not consider irrelevant. There are many different ways of looking at ancient wisdom, spiritually, from a yogic perspective, and also in an academic perspective. In the modern world, we have become so specialized and knowledge is so compartmentalized that we often miss the big picture.”

The lecture was attended by people from a variety of backgrounds and beliefs. Brahmachari Shantamrita, who is currenly looking after the Amma’s ashram in Japan,  said that he hoped his lecture would inspire people to revise their outlook.

AYUDH has stepped onto African soil. During his visit to the Republic of Kenya from February 5th to 13th, Br. Shubamrita, launched AYUDH Kenya.

“On Saturdays we are bored. Just going out, coming home late and then wasting away our time in front of the TV did somehow not feel fulfilling anymore,” says Pareet, an AYUDH member, from Nairobi. So he decided to call his friends over for a meeting, to sit down and talk about some things they can do to help others.

It is not difficult in Kenya to find needy people and deserving causes. With a youth unemployment rate of 75% in Africa as a whole, crime and drug abuse are steadily increasing. Nearly 1.5 million orphans are struggling to survive day by day in Kenya alone. Pollution goes uncontrolled and there have been times when AIDS was killing more than 700 people a day.

AYUDHs first project will be a clean-up day in one of the slums of Nairobi at the end of March. AYUDH also has established contact with a group of young adults with Albinism, who face a lot of obstacles and challenges in Kenyan society. It is AYUDHs sincere desire to associate with these youngsters and help them develop a positive self-image.

The first two AYUDH meetings were a great success. Youngsters both from the Asian-Kenyan and the Christian African-Kenyan communities attended the meeting. Both parties said that they had never before made such an effort to overcome the barriers of religion and culture and work together to serve society. It is a very promising sign that the youth of Kenya are ready to work together to realize their vision of unity, mutual respect and collaboration.

“God is always awake within us, but we are sound asleep,” Amma said. “As a result, we are unable to experience his presence.” It was almost 2:00 in the morning—half way through the traditional night-long vigil and fast of Sivaratri. Amma then told everyone assembled that holidays like Sivaratri are opportunities to try to emerge from this state through a night of austerity.

Amma then went on to explain that ‘remaining awake’ in fact did not only mean keeping the eyes open. “It means to maintain awareness of our actions, words and thoughts,” she said. “When this awareness dawns, ignorance disappears. Darkness is not something we can remove, but when we bring in light, it automatically disappears. In the same way, when awareness dawns, the darkness of ignorance fades away.”

“Food and sleep are very important,” Amma said. “No one will sacrifice them just like that. Only when our love for God transcends our love for food and sleep will we stop consider fasting and maintaining vigil as suffering. … When love for God awakens in our heart, we find all worldly thoughts fading away. Festivals like Sivaratri are opportunities to awaken this love within us.”

Amma ended her talk by saying, “It is Amma’s prayer that her children have the attitude of sacrifice and surrender not only on Sivaratri but throughout their lives. May your thoughts, words and actions arise from love.”

Amma held a one-day programme in Tanur. It was Amma’s first visit here, and the large grounds were filled to overflowing–people had begun coming at 7:00 am to ensure they got a good seat for the evening programme. Onlookers could be seen spilling over into the yards of all the neighbouring houses and the neighbouring temple grounds. In the spirit of the festival atmosphere, the neighbours opened their houses and facilities to the devotees. Even before Amma’s arrival, folk dancers performed many traditional art forms in the grounds itself. Breakfast, lunch, dinner and again breakfast the following morning was served free to all who attended the programme.

The famous Kerala poet  Akkitham Achyutan Namboodiri declared that the word Amma no longer holds meaning in Malayalam alone, but in all the languages of the world, as Amma renews the concept of the universal mother in the global consciousness.

Renowned film music lyricist Srikumaran Thampi reflected on how someone like himself who has been an avid student of science and was known as a progressive thinker had become Amma’s devotee–he said that whenever he is asked about this, he replies that Amma is the greatest progressive thinker he has ever met, that she teaches a progress which neither science nor literature, cinema nor politics can possibly impart. He declared that Amma’s life itself is an expression of this progress. “Amma is a promise – that the tears of the suffering shall be wiped and seeds of peace and truth sown in their hearts” Tampi reiterated.

Meanwhile, the great Kerala writer C. Radhakrishnan, compared Amma to the sun in her capacity to shower love and compassion endlessly and without expectation. “Amma alone is capable of giving such unconditional love. The meaning of the word Amma (Mother) encompasses both Mother and Guru. Amma is the one in whom we see the fulness of both. Mata Amritanandamayi Devi is the very embodiment of these qualities. Wherever there is sorrow Amma reaches out, giving love out of a store of love that remains undiminished even after encompassing the whole world.”

After the function, Amma gave satsang and led the crowd in bhajans. Throughout her talk, Amma stressed the importance of adhering to values in one’s life. Amma commented that without values, human beings become just like machines. At the conclusion of her satsang, Amma asked the crowd to reflect on how to minimize their environmental footprint. She told them to avoid using paper cups and to try their best to carpool. She also suggested that everyone could plant a vegetable garden in their own homes, and use the earnings from the sale of these vegetables to help those in need.

Amma’s darshan itself went on all night and late into the following morning.  Earlier Amma had announced that for some with later tokens it would be a long night, and invited the crowd to eat the free dinner being served to one and all, and to rest in the nearby Amrita Vidyalayam school while awaiting their turn for Amma’s darshan. As this news is posted, Amma is still giving darshan. The sun rose on a new day to find Amma doing what she has done every day of her life–embracing, comforting and inspiring humankind.