With Kerala steeped in the summer heat, Amma began her short tour of central Kerala this week, visiting first her ashram and Brahmasthanam Temple in Edappalli, Ernakulam. The heat was oppressive, but each night it rained, the temperatures dropped down, bringing external relief alongside with Amma’s inner-cooling touch.

When Amma arrived at the ashram, the devotees all began singing and clapping “Amma Amma Taye!” It was an ecstatic moment, and before going to her room, Amma stood above the sea of devotees, gazing down at them, smiling and enjoying their innocent devotion.

The first evening program in Kochi saw the inauguration of an Ashram program aimed at improving the health of impoverished families living around the Amrita Institute of Medical Science (AIMS). Through the Amrita Health Card Program, families living around AIMS will be provided free medical aid up to Rs 10,000 per year. MLAs Sri. K. Babu and Professor K.V. Tomas distributed a number of Health Care Cards on the dais alongside Amma.

“The compassionate services undertaken by the Mata Amritanandamayi Math under the spiritual leadership of Amma are deep and wide and beyond description,” said K. Babu. “I sincerely pray that the nation be further brightened by Amma’s blessings and that we all be blessed by Amma.”

At the same function, a dozen widows and handicapped people were enrolled in the Amrita Nidhi by Sri. Mohammed Hanish, the District Collector of Ernakulam. 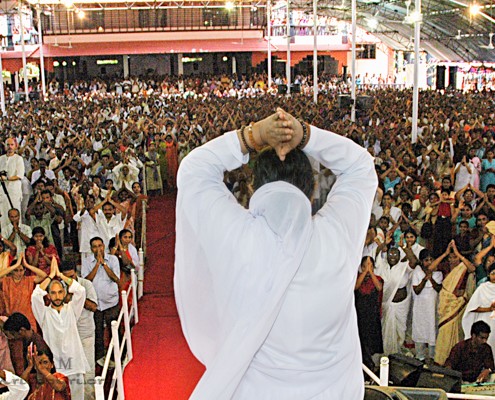 In his talk, Professor Isaac said that he believed that Amma was the only hope for a world overcome by problems and anxiety. “What has Amma given the world? What Amma has given the world is solace,” he said. “What message is She conveying to the world? Amma’s message is to eradicate poverty. Besides providing relief to the ailing, Amma is also undertaking practical measures to do away with diseases. Amma is not remaining in the skies as a spiritual ideology or as a theory in a magical world. She receives in Her feet every thorn of this Earth.”

At the end of darshan on the last night of the festival, some of the students studying at the Kochi campus of Amrita University asked Amma if she would sing “Mata Rani,” a bhajan to the Divine Mother that Amma has of late taken to singing at the end of darshan. She acquiesced, and soon the whole hall erupted in Amma’s song. Amma… the students… ashramites… everyone was dancing and singing. As darshan finished, the students “walked” Amma to her room, continuing to sing and clap and celebrate their moment with Amma.