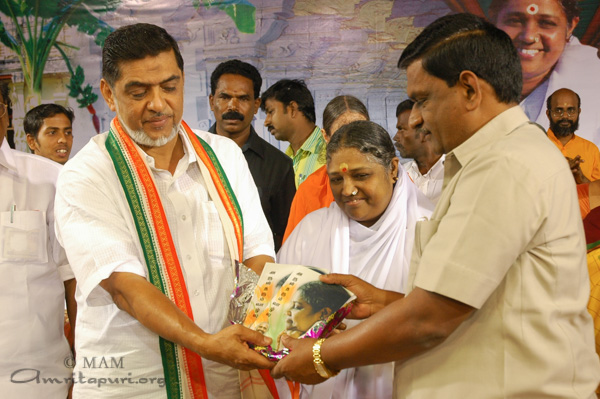 After the maha-samadhi of his guru, Sri Ramakrishna Paramahamsa, Swami Vivekananda wandered for several years throughout the length and breadth of India. Towards the end of this period of parikrama, the spiritual visionary met two kings who encouraged him to act upon his idea of going to America in order to propagate Vedanta—the Maharaja of Mysore, and Bhaskara Setupati, the ruler of Ramnad [a.k.a. Ramanathapuram].

Both kings offered to bear all of Vivekananda’s travel expenses. Swamiji left for America in 1893, where he won over countless hearts and minds through his discourses at the Conference of World Religions in Chicago. Swamiji returned to India in 1897. When Vivekananda came through Ramnad on his journey homeward, the horses carrying his carriage were unhitched and Bhaskara Setupati and the people of Ramnad drew Swamiji through the streets themselves—such was their respect and devotion for the dynamic samnyasin.

On 6 February 2007, during Sri Mata Amritanandamayi Devi’s first darshan program in Ramnad, Sri. Hassan Ali, a Ramnad MLA, addressed the 15,000-strong gathering. In the presence of Amma and the current Raja of Ramnad, Sri. Kumaran Setupatti, Hassan Ali reminded everyone of Swami Vivekananda’s historic visits to Ramnad more than 100 years prior. He also said that that Bhaskaran Setupati had deputed his grandfather to see Swami Vivekanada off to America and to welcome him upon his return to India soil.

Today, we are having with us one of the best-born of India, he said of Amma. Ramnad has been identified as the most backward district in Tamil Naduonly in material, not in spiritual. Vivekananda came to Ramnad during the time of Bhaskar Setupatti, then King of Ramnad. And during his time, one man was deputed to send Vivekananda to America. His name was Lembe Nena Marakkayar  and I am his great grandson. He welcomed Vivekananda. Today, I welcome Mata here. Mata, welcome to our place. 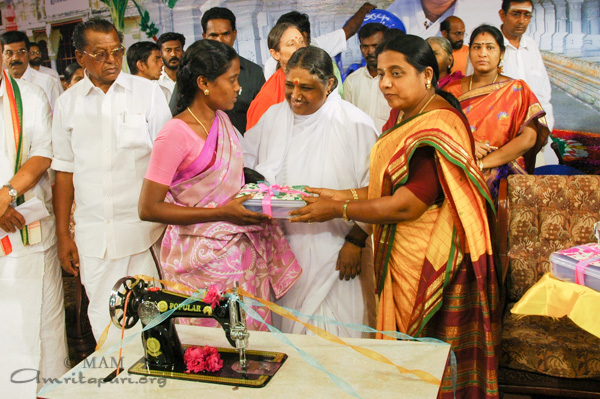 Lauding Amma as a spiritual master and humanitarian, and specifically thanking her for the Amrita Kuteeram houses the Ashram has built in Rameswaram, Hassan Ali asked everyone to join with him in prayer. “May I request you all to pray with me that Mata gets the Noble Peace Prize next time,” he said.

Sri. Suba Thangavelan, Minister for Housing and Slum Clearance, Sri. Muthu Swami, the District Collector of Ramnad; and Bhavani Rajendar, MP, were also on hand to welcome Amma to Ramnad. The government officials helped distribute pension checks to widows and handicapped people as part of the Ashram’s Amrita Nidhi Project, as well as distributed sewing machines to impoverished women in order to help expand their financial horizons. This marked the inauguration of the Amrita Nidhi Project in Ramnad, with a 1,000 beneficiaries being allotted in the area. A total of 100 sewing machines and accessory kits were distributed.

Many of the devotees present for the program were from the Ashram’s Amrita Kuteeram housing colony in Rameswaram, which is situated 59 kilometres from Ramnad.

Darshan continued on until 10:45 the next morning.