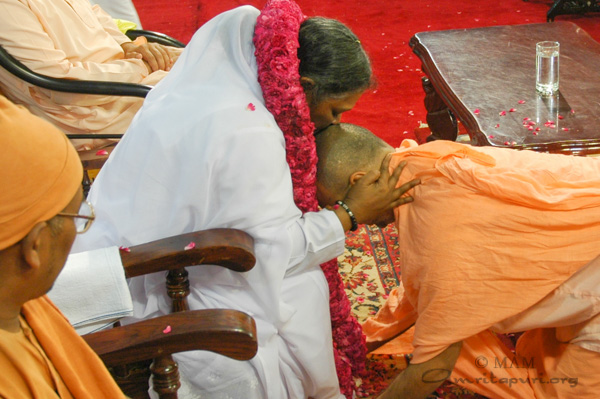 Amma was welcomed to Kanyakumari by a collection of samnyasin monks and selfless-service workers, including Swami Chaitanyananda Maharaj of Vivekananda Ashram; Swami Jagadiswarananda of the Sivananda Hospital in Pattamala; Sri. Banudas, the general secretary of Kanyakumari’s Vivekananda Kendra; Sri. Muthuswami, the chief of the RSS for the Kanyakumari District; and Dr. Deiva Prakash, the secretary of Seva Bhar. The Collector of Kanyakumari District, Sri. Sunil Palival, IAS; and former Railway Minister Sri. O. Rajagopal were also on hand.

At the outset of the evening’s program, Swami Chaitanyananda welcomed Amma with an address, comparing her compassion to that of Sri Sarada Devi, the wife of Sri Ramakrishna Paramahamsa, the guru with which his parampara [line of knowledge] began. The swami told of how once when Sarada Devi was leaving Calcutta, all the disciples of Ramakrishna went to take her blessings, except one. When asked why he wasn’t going to take her blessings, the monk said, “I am a samnyasin. I have no father or mother.” Someone informed Sarada Devi about what the monk had said, and she replied, “He may not bother about mother and all, but everyone is my child. I will go to him.” When the swami saw that Sarada Devi had come to say goodbye to him, he broke down in tears and begged for her forgiveness. Having finished the story, Swami Chaitanyananda drove home his point: “Amma has not visited Kanyakumari for two years. I do not know how many of us have bothered to go to Kollam [Amritapuri] to see Amma, but Amma has come here to meet all her children. God is more compassionate than the worldly mother who feeds her child whenever the child is hungry. God is more compassionate because he attends to all the needs.” 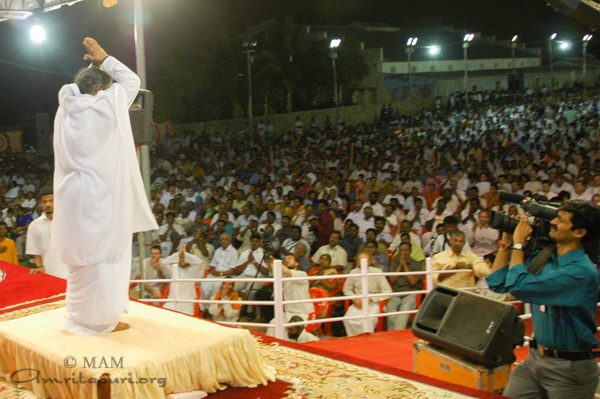 Amma personally gave 10 new enrollees in the Ashram’s Amrita Nidhi pension program their certificates of enrolment and first checks. These were representative of 1,000 new such beneficiaries in the Kanyakumari area. Sewing machines and tailoring accessories were also distributed to 10 impoverished ladies; these were representative of a 100 such women in the area that the Ashram is trying to uplift by expanding their financial horizons.

To the delight of devotees, Amma sang “Devi Jaganmata,” a song in praise of Kanyakumari Devi, the goddess synonymous with the seaside town.

Performing austerities on the shore of the blue sea.
Eternal virgin! Mari Kumari Amma!
Please come and give me a boon.

Then, at the very start of darshan, Amma’s Kanyakumari devotees came and bedecked her with a silk orange sari, necklace and crown in the vein of the virgin goddess who is said to eternally perform austerities on the shore of Kanyakumari. In fact, the backdrop for the dais was a photo of Vivekananda Rock, which is situated right off the shore from the Kanyakumari Temple. In the bright lights of the stage, Amma’s nose ring was shining brightly, just like that of the goddess in the legendary temple.