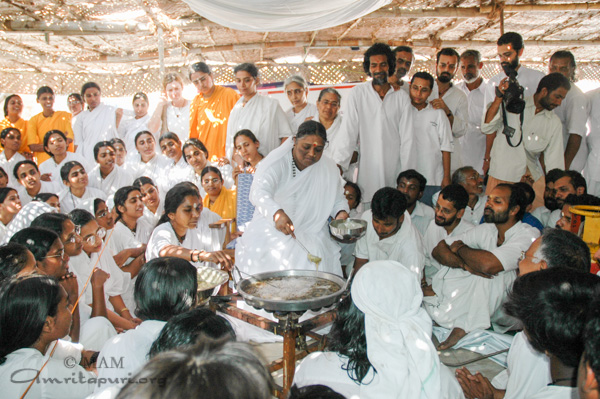 Once, a guru and his disciples were travelling by foot. There were about 40 disciples in all, and they all dressed like the guru, wearing white dhotis and shawls. The guru’s head and face were clean-shaven, and so were those of the disciples. By appearance, there was absolutely no way to tell the master from his students. A few hours before sun set, the group stepped off the dirt road they were walking down and entered a field of cool grass, where it was there intention to meditate, cook dinner and sleep for the night.

In the field, stood an old well framed with bricks. Everyone in the group was quite tired from the long day’s walk, so they quickly drew some water and set about making chai. Within a half an hour, the guru and his 40 disciples were sitting together enjoying a cup of tea. It was at this point that a lone traveller came walking down the road. When he came to the field where the guru and disciples were camped, he paused for a moment and watched them. Then suddenly, he walked over to the guru and offered his prostrations before him. As he lay at the guru’s feet, the guru leaned down and blessed him with the touch of his hand. The man then stood up, took leave and continued on his journey.

Watching this interaction, one young disciple immediately had a doubt. “We are all dressed them same. We all have shaven heads and beards. And when that man approached us, none of us were showing any external sign of reverence for our guru? How was this man able to tell him apart from the rest of us?” With this question in his mind, he put down his glass of tea and hurried after the traveller.

When the young monk caught up with the man, he expressed his doubt. The man smiled and responded, “When I first saw you, I knew that you were all monks. But, indeed, I could not tell who the Master was. But then I looked at the manner in which all of you were drinking your tea. For 40 of you, there was nothing special about it—just a group of men enjoying a cup of chai. But when my eyes fell upon your guru, it was as if I was watching something completely different. In fact, the way he held his cup of chai reminded me of the way a mother holds her child. His every action and look were full of love, reverence and compassion. It was as if he was not holding an insentient object at all, but God Himself embodied in a metal cup. Seeing this, it was infinitely clear to me that he was the master, so I walked directly up to him and offered my pranam.”

There was a special incident on the first leg of Amma’s 2007 Bharata Yatra. It took place in Amma’s Madurai ashram, in the mid-morning after the conclusion of the program there. Amma’s darshan had gone on till almost five o’clock that morning. And as such everyone was just starting to get ready to load all the buses and lorries for the trip to Ramanathapuram. It was at this time that Amma suddenly walked out of her room and up the stairs to the ashram’s roof, where all the brahmacharis were staying.

A chair was brought and Amma soon sat down, everyone filling in as close to her as possible. But Amma did not want this. She told everyone to clear a little bit of space and to remove all the straw sleeping mats that were covering the floor. A temporary thatched roof had been erected to shelter the brahmacharis from the sun, and Amma told some of them to cover the section of the thatch work above her with a sheet. Then one brahmachari came up the stairs carrying a gas cylinder and burner for cooking. He was followed by a couple of brahmacharinis carrying a large metal frying pot, a drum of cooking oil and a large bowl of batter. Amma was going to fry unni appam1.

The burner was lit and the oil poured into the pot. By now, all the 500 or so disciples and devotees helping with Amma’s tour had come to the roof. 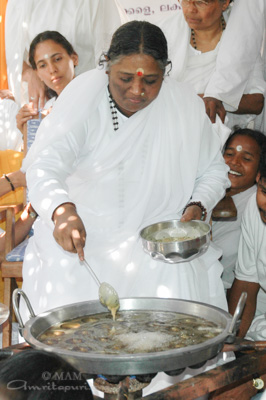 Amma tested the heat of the oil by dropping a small piece of batter into the pot and seeing how quickly it rose to the surface. “These are my children,” Amma joked, referring to how the guru uses the heat of experiences to prepare the mind of the disciple. When she felt the oil was ready, Amma began placing scoop after scoop of batter into the oil. And for some time, she continued her joke, naming the different balls of batter after various brahmacharis and brahmacharinis. As the appams became ready, two or three brahmacharinis sitting near Amma began removing them from the oil using metal sticks. These were then place into a bowl for Amma to distribute by hand later.

For the next half an hour or so, 500 grown people simply watched Amma cook unni appam. Not much was said—not by Amma, nor by her children. Yet everyone was riveted. They hung on Amma’s every movement, every gesture. What was so fascinating about it? Ostensibly, it was nothing but a woman cooking snacks. So why was everyone so engrossed? Spellbound even? The answer lies in the way Amma scooped the batter, the way she poured it into the oil, the way she watched the appam transform from the inedible to the edible. Her actions were so full of love, so full of compassion, so full of knowledge. It truly was as if the appam were, as Amma had said—her children. For a mahatma like Amma, there is no such thing as the insentient. Everything is steeped in consciousness. It is this knowledge that reflects in Amma’s actions. It lends them a beauty and grace that can keep mankind fascinated for an eternity.