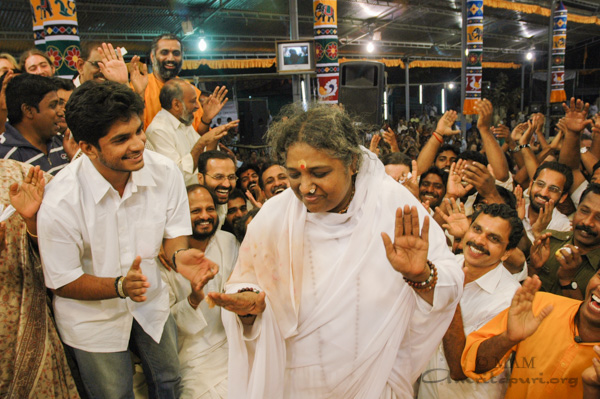 Seventy kilometers north of Coimbatore, in the Nilgiris hill town of Ooty, resides a community of people known as the Badaga. The Badaga trace their ancestry back to Ethai Amman, a pious woman from Mysore who fled the city when a Muslim king wanted her as his prize. Theirs is a somewhat cloistered community, stretching across some 500 villages in the Nilgiri Hills, which make the border of Kerala, Tamil Nadu and Karnataka. The Badaga have their own customs, codes, traditions and language. Dharma, faith, compassion and service—these are the hallmarks of the Badaga. They will proudly tell you that one will not find a single beggar among their “brothers and sisters” and rarely are any of their children born handicapped. (They attribute both of these to their culture, which nurtures service-mindedness.)

Each year more and more Badagars make the pilgrimage to Kovai to have Amma’s darshan. This year nearly 600 participated in the Kovai Brahmasthanam Festival. It is their faith that Ethai Amman was in fact an incarnation of the Divine Mother, and that it is she who is once again with them in the form of Amma.

“Actually to us Amma looks like a Badagar,” says Smt. Sivagami R., a Badagar who serves as the primary in-charge of Amrita Vidyalayam Kovai. “The way she always pulls her sari over her head—Badaga women will only wear their saris like that. Traditionally, we will never pin the sari. Even Amma’s face resembles that of a Badagar.”

In fact, Amma has been known to the Badaga of Ooty for many years through the Ashram’s monthly spiritual magazine. “Many people there know Amma only as ‘Matruvani Amma,'” says Smt. Chitra Bheeman, another Badagar working at Kovai’s Amrita Vidyalayam. “Long back some Matruvani campaigners came and sold some lifetime subscriptions in our villages. These have always been circulated, and in this way the name came.”

A central element of Badaga culture is music and dance. When inspired, the Badaga will spontaneously begin improvising melodies and lyrics. “It is our way of expressing our fondness for someone,” explains Smt. Sivagami.

Their often-ecstatic music comes in the form of call-and-response, and some say the Badaga even have a form of telepathy, which enables them to improvise cohesively. The words and melodies are ever new, but the dance steps remain the same, regardless of the occasion. The Badaga sing and dance at weddings, births, funerals and nearly all other occasions.

For the past three or four years in Kovai, the Badaga have sung and danced for Amma. And this year was no exception. On the first night of darshan, they began around 1:00 a.m. and played on till Amma had embraced every last person.

The Badaga’s lead singer was a lady with a piercing voice who kept time with hand cymbals as she sang. The entire time, she barely ever opened her eyes. Watching her and the rest of the Badaga—and their slow, graceful, dream-like dance—Amma commented that it was as if they were meditating.

In fact, many of her lyrics were about Amma:

Amma, can you hear what we are saying?
Has it reached you?
You are the Great Giver.
We are spreading happiness
By singing about you.
Come running to us. Come running.

The music was an onslaught of drums and cymbals. It was an earthy, powerful and glorious ruckus to which the Badaga’s synchronized slow-motion dance served as a stirring and poignant counterpoint. 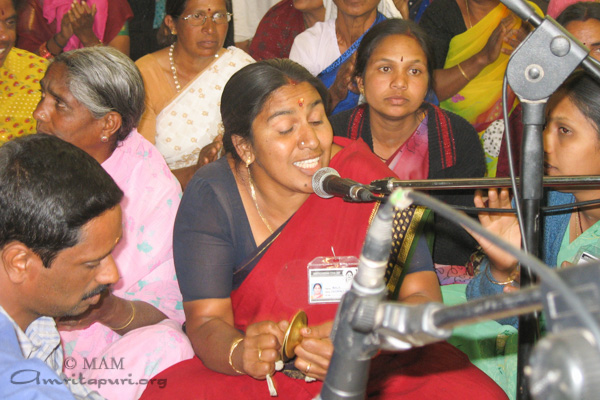 When Amma finished darshan at 3:00 a.m., the Badaga did not stop. With their music resonating all around her, Amma stood up on her peetham and pranamed. Then, just as Amma was about to step down and walk up to her room, she stopped and slowly began turning in a circle in imitation of the Badaga’s dance. As music, applause and ecstatic cries filled the chilly hillside air, Amma walked up to her room.

“For us that was the happiest moment,” Smt. Sivagami says of Amma’s short dance. “We felt that Amma was really one with our community.”

The Badaga sang and danced again on the last night of darshan for nearly three hours. Their devotion engulfed the entire program site. It was as if everyone was suddenly a Badaga. As Amma’s three days of programs in Kovai came to a close, one Badagar spoke over the sound system: “Amma, we thank you from the bottom of our hearts for these past three days. You have awoken the glory of the old days. This is a moment our community will never forget.”