Both pensions for widows and houses for the homeless were given away during Amma’s program in Lakshmanpur (Lucknow). The occasion prompted both Sri. Matraprasad Pande, the Speaker of the State Assembly of Uttar Pradesh, and the former Chief Minister of Uttar Pradesh, Sri. Jagadambikapal, to comment on Amma’s world-embracing compassion. 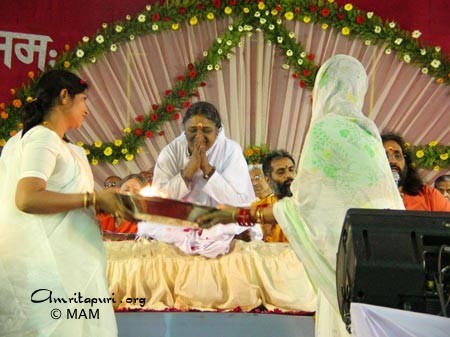 “Although Amma stays in Kollam, she has shown today that she is indeed the mother of the poor, the handicapped and the homeless in Lucknow,” said Jagadambikapal, who helped distribute certificates of enrolment to new beneficiaries of the Amrita Nidhi lifetime-pension programme. “Today, it would not be appropriate to say that Amma is merely the mother of Kerala, or even the mother of India, for that matter. The truth is that she is verily the mother of the whole world.”

Matraprasad, who helped distribute keys to houses constructed for the homeless as part of an Amrita Kuteeram housing colony, said, “Through her spiritual power, Amma is helping crores of people. This is sending a message to the world that Bharat is regaining its spiritual grandeur. I welcome Amma’s holy arrival on the sanctified soil of Lucknow. I offer my salutations and gratitude that in the minds of numerous poor people you have ignited the flame of hope that there are spiritual people to look after them.” 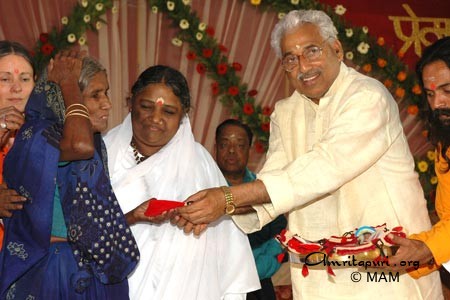 Also on the dais was Sri. Lalji Tandon, the Leader of the Opposition.