For most people, celebrating is something looked forward to. Five or six days a week one works (jobs being the opposite of celebration) dreaming of quitting time, of the weekend, the seaside vacation, the religious holiday. With Amma, life is different. There is no “looking-forward to celebrating.” Every day is a delight—the intense labour of service is itself is part of the party. This is the teaching of the spiritual masters: sever your selfishness and find the joy and freedom awaiting you—not after death, but here and now in this very life. 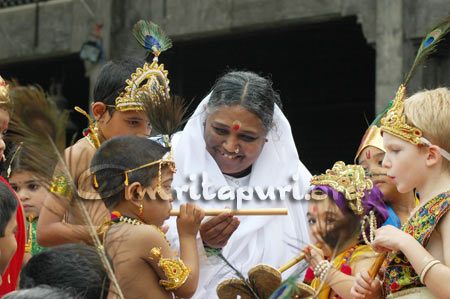 That said, there is something special about Krishna Jayanti. The anniversary of India’s most popular Avatar is a time for people around the world to dance in remembrance of the bliss that was his life {story}. And this was exactly what took place in Amritapuri.

The morning started off with Go Puja, worshiping God in the form of the cow, which gives so selflessly to mankind. The cows were led to the front of the temple where they were anointed and garlanded to the chanting of mantras and the singing of bhajans.

Later, around 3:00 p.m., children of all nationalities—both from the ashram and from the surrounding villages—gathered in the main hall, where they were dressed up as little Krishnas, Radhas, and gopis and gopas for a procession to the a nearby Krishna shrine. Mothers adorned their daughters in colourful saris and plastic jewels and applied tilak to their foreheads. With their painted eyes, veils and jingly anklets, the little girls looked very much like the gopis of North India. Most of the boys dressed up as cowherds with dhotis and sashes tied round their wastes, but a few donned crowns and peacock feathers and carried a flute. Joining a crowd of ashramites, Amrita University students and musicians, the children wound their way through the ashram and along Beach Road to the Krishna temple. After circumambulating the temple, they headed back to the ashram.

When they returned, it was time for uriyadi, the pot-breaking game associated with Krishna’s childhood. In the past, this game has always been held in front of the temple. This year, however, it was played in the space created when the East Wing buildings were recently razed. Amma sat in a chair and watched as the children ran towards the suspended pots, trying to break them open with sticks, while mugs of coloured water were thrown at them. The pots, of course, are hoisted up and down—in and out of the children’s reach. Whenever a child succeeded, everyone would cheer, and the children would all scramble to collect the coins that had been hidden inside the pot.

During the games, the children who had been in the procession approached Amma for darshan. When they were finished, a few of the Amrita University students and brahmacharis who had participated also came for their blessing. They had dressed up for the occasion, quite elaborately, as various characters associated with the life of Sri Krishna. Among them were two beautiful Radhas… No, wait, these were not girls but two brahmacharis! When Amma recognized them, she nearly fell off her chair with laughter. It was really almost too much for her. Amma kept having to turn away in order to stop laughing.

Uriyadi continued for another hour or so. At one point, a two-year-old French boy had his turn. Wearing only his diaper and holding his small stick, he took a few swings. Finally, the pot was lowered enough for him to reach it. Alas, swinging as hard he could, he simply could not break the pot.

Eventually it was the students’ turn to try their luck breaking pots. At one point, the students formed a human pyramid in order to reach the pot. Teetering this way and that, they reached up to where the pot hung (25-feet high!) and smacked it open. Cheers erupted all around followed by chants of “Arrroppo roh roh roh!”

As dusk approached, Amma started singing “Krishna Krishna Radha Krishna.” What started off as a regular bhajan soon sped up radically, all the while increasing in volume. Amma was clapping her hands with those of the children seated near her. Just when one thought the song couldn’t get any louder or faster, Amma raised her hands above her head in ecstasy, pointed her index fingers to the sky and started shouting “Hari Bol! Hari bol! Hair bol!” over and over again.  Everyone joined in. Amritapuri and Vrindavan were one. The gopis and gopas were singing with Krishna once again. The joyous sound reverberated through the air, bouncing off the flats, where many devotees had gathered on balconies to watch the festivities below.

It was a glorious way to end the uriyadi games, but the Krishna Jayanti celebrations had only just begun. [click here for more]