“It is not death, but immortality and bliss that life is all about,” Amma began her Krishna Jayanti message. “This is what the life and birth of Sri Krishna teaches us. Sri Krishna faced an immense number of difficult situations in his life—many more than the average person. Although death appeared before him in various forms, he faced and defeated it with a smile ever on his face.” 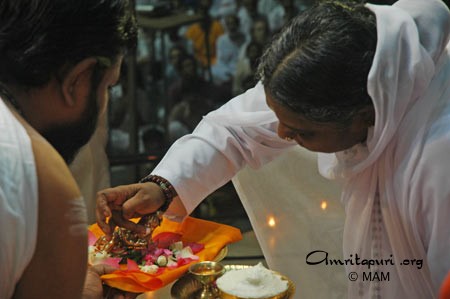 When Amma finished delivering her message, it was 11:30—only a half an hour remained until the hour of Krishna’s birth.

Next, the story of Krishna’s birth was sung from a Malayalam version of the Srimad Bhagavatam. It culminated at midnight. Drums banged, conches blew, and a baby Krishna murti [idol] was brought to Amma, who anointed him with butter and honey.

Then it was time for the traditional post-midnight Krishna Jayanti bhajan. As is tradition, Amma sang “Agatanayi Agantanayi Krishna Devan,” “Nanda Gopan Tapamirunnu Sundara Kannan,” “Katti Tayar Taram” and “Govinda Gokula Ayo.” The songs were so full of life and love that they nearly burst at the seams. It was happiness itself set to music. {story}

Then, for the last song, Amma rose to her feet. Everyone knew she was going to dance. Amma asked everyone to stand up, raise their hands in the air and dance along with her. She also asked everyone to pray for world peace, saying that the world is continuing to go through difficult times. 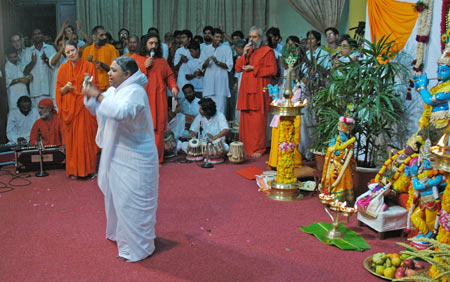 Swamiji lead the bhajan: “Bolo Bolo Gokula Bala Gopala Jai Gopala.” Amma started off, slowly swaying to the beat, stepping gently from side to side. Then, as the beat increased, her steps turned to hops. Eventually, Amma was almost bouncing on the stage while playing her kaimanis [small hand cymbals]. Just below her, in the hall, the devotees and ashramites were jumping too, swaying back and forth and clapping their hands. When the music reached its peak,  Amma suddenly sat down on the floor in meditation. For several minutes there was utter silence except for the ringing of a small brass bell—the sound of a brahmachari concluding the Krishna puja.

Amma then stood up, walked a few steps to the edge of the stage, sat down and began serving payasam prasad to everyone in the hall.

It was nearly 1:30. Another Krishna Jayanti had come to a blissful conclusion.