If one approaches a Guru, earnestly seeking to understand the nature of his mind, the Guru’s knowledge will flow forth and clarity will come. In fact, the Guru Gita  says the words of a True Master are like the instrument of an eye surgeon dipped in the ointment of knowledge. If one wants to remove the cataract of ignorance, all one needs to do is to lie without flinching and allow the surgeon to do his work.

On the way from Shegaon to Pune, Amma stopped for lunch in Pandarpur. There, in a field on top of a small hill, one of the devotees traveling with Amma came forth with a question, and a classic surgery took place. 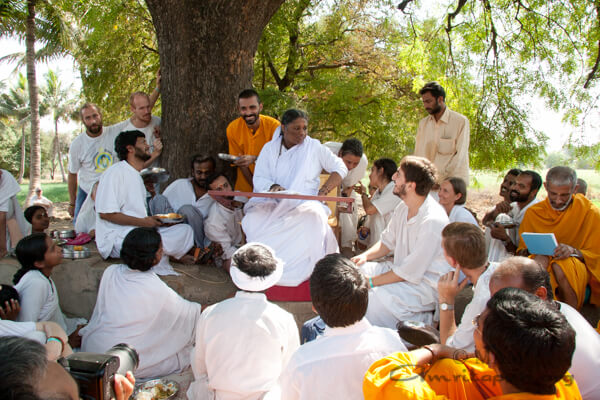 “Amma, when we are facing very strong attachment—something we are so identified with that we can’t get rid of it—what is the proper attitude?” the man asked. “Should we try to fight to get rid of it? Or is it like a fruit that is not ripe enough to drop and the proper attitude is to wait a little longer until it matures and drops on its own?”

Amma said, “If your desire is intense and you try to suppress it, it will only return with more power. Even after we experience once or twice or three times, still the desire will keep coming back, so we shouldn’t think that it will be satiated through indulging.”

Giving the example of the kama vasana [tendency for lust] for partnership, Amma said, “Even at the age of hundred, it will not go, and even if one gets married, he or she may still become attracted to other people. At some point we must try to cultivate vairagya [dispassion].”

Amma then explained how the bliss, pleasure and sense of satisfaction we get from the various objects and attainments of the world, in fact, comes from within. “If you eat 10 chocolates, the joy you get from the 10th chocolate is not equal to the joy you get from the first,” Amma said. “If the bliss had been in the object, then each piece should have been able to give you the same amount of bliss. But it is not; the bliss is within; the bliss is within the mind. You have to understand the nature of the world and the nature of your mind and from that viveka [discriminative thinking] will arise. At one point, you must draw back.”

The man was not satisfied with Amma’s answer. In fact, he had a very specific desire in his mind. “What about an attachment that is related to a lifestyle that is supposedly incorrect?” he asked. “I want to do something, and supposedly I want to do it because it is a vasana. I am confused. I don’t know what I should do?”

“Amma, last year I sent you a letter. I told you that I was going to sail my boat from America to India, and this is a plan that I’ve had for many, many years. And you replied to my letter and you said, ‘Don’t go.'”

Amma’s opinion had apparently changed. In English she said, “Okay, you try, you try.”

The man however did not accept Amma’s reversal of stance so readily: “No, in your letter you said, ‘No, don’t do it, something’s going to happen.'”

Amma then explained to him that at that particular time she had felt it was not a good period for him to travel.

Then the man made a confession. “Anyway, I was still going to do it,” he said. “I was still going to move the boat a little bit. And somehow I met another master, and he told me the same thing. He said, ‘Don’t do it! Never! Give it up in this life!’ And he said it was linked to a past-life karma, and he told me about the past life in the 15th century and blah blah blah.

All the 400 or so people seated around Amma burst into laughter. And Amma herself was unable to hold back her smile for long.

When the laughter died down, Amma asked him how long it would take to sail from America to India.

“Between two months and 10 years.”

“Has someone done this before?” Amma asked him. “It’s not like just going on a ship; many factors are involved.”

The man told Amma that, yes, many people have made similar voyages, adding that he had been living on the sea for the past 20 years.

Amma saw a clear shot at the cataract and moved in swiftly. “Even after being on the sea for 20 years, this desire has not been exhausted,” she pointed out. “So maybe you can pray to God, ‘In the next life make me a dolphin!'”

Amma continued: “If you don’t fear death, if you have the strength to face any circumstance, then no problem. But you should study about the different obstacles you may face when crossing into the territorial waters of various countries. In some places, if you don’t have the proper papers, they may put you in jail. You have to study all the different aspects, and then if the desire is still there you can go.”

The man was confused. “So Amma is saying that the vasana may finish by doing it?”

Again came the laughter, but the man protested. “No, because the point is to get rid of the vasana. That’s what I want.”

Seeing his earnest desire for help, Amma’s compassion flowed forth: “No. By fulfilling a vasana, it can never be exhausted. The dispassion that results is only smashana vairagya [cremation-ground dispassion]—like when one’s beloved wife dies, he may say I am never going to remarry, but within six months he marries again.”

Amma then told the man that if his desire was really strong though, it was okay, he could make the trip. But Amma did wonder what he thought was so special about the voyage. She asked him as much, and he confessed that, in fact, he did not know.

Amma then told him that during the journey he should constantly watch his mind and reflect. She told him to break the trip into legs, and then to do one section and see how his mind was reacting. Similarly, the second leg and third leg. “Each time you finish one leg, watch the mind. See if the desire to continue still persists. If you want to continue, go ahead. But after you’ve finished the third leg, if the desire still remains, you should realize that it is never going to go. At that point, please stop.”

It was striking advice that clearly could be applied to many desire-driven activities outside of sailing.

Still, the man had one final question: “Wouldn’t it be better to just pray about it, rather than experience it?”

“The goal should be very clear,” Amma said. “You should have an intense desire within you for transformation. You shouldn’t be like the man who drives his car into a ditch and then takes out his asana [meditation cushion] and starts praying, ‘O Almighty Lord, please get my car out of this ditch.’ Your prayer should not be like that. You should actually try to push the vehicle out of the ditch as you pray.”

To conclude, Amma made perhaps the most penetrating comment of the afternoon: “The effort you are putting forth for the voyage could be better utilized for helping the poor—buying them food, clothing and looking after their education. Look and see if your desire to sail isn’t just the naughtiness of the mind.”

As they walked back to the buses, many of Amma’s children were talking about the conversation. Amma—the True Master that she is—had not only clarified the man’s doubts, she had also triggered the general inquiry: “How many similar ‘voyages by sea’ do I have in my life?”