The ocean breeze carried the scent of salt water onto the shore. All were gathered under the palm trees in meditation with Amma. Aside from the rhythmic crashing of waves and occasional bird chirping overhead, the beach was quiet. 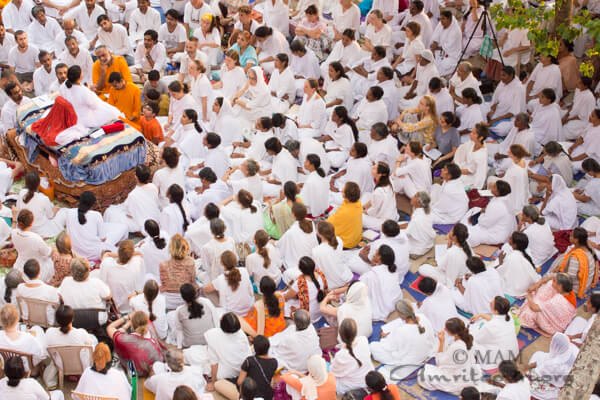 After the meditation came to an end, Amma asked if anyone had a question. One devotee raised his hand:
“Two years ago I had a stroke and it took away all my energy. I thought that my vasana for living a life at sea was finished. Now, when I see the boat in the ocean, I feel my energy return, I feel attracted to the boat. It’s my vasana. What should I do? Should I live a life without energy, or should I follow this desire to live at sea? I will do as you say; you are my Guru.”

This devotee had asked a very similar question almost 10 years before {news} , but now, having suffered a stroke, he was looking again at the sea with a sense of longing.

The body is a temporary home

Amma began her response: “Whether you are in the sea or on the land, you have to be happy. “Life should be like staying at a hotel: when you check in, you happily check in and live there happily, and when you check out, you go happily. That equanimity comes from the knowledge of owning your own house [the Atman or the Self], which you will return to upon checking out from this body. That’s how we should be in life. If you are staying in a rented house and the owner asks you to vacate the property, you do not worry as long as you own your own house, which you can easily return to. Our body is like a rented house. Anytime we may be evicted. We need to cultivate the knowledge that the Atma is our true home. That way, just as we check out happily from a hotel, we will have the same sort of attitude when leaving the body.”

Amma then narrated the story of a kingdom in which anyone could become the king. The only caveat to rulership was that it lasted a mere five years, after which the king would be exiled to an island full of vicious, wild animals that would inevitably bring about his death. Each king enjoyed his rulership for sometime, but slowly would grow depressed at the knowledge of his imminent death. One king was different. Nearing the end of his rule, he was still in good spirits. Seeing the king is happy even on his exile, his minister asked him what the secret to his joyful attitude was. The king replied that he had sent his servants to the island long ago. For five years his people had been clearing the forest and the animals, building him a palace, and setting up everything as he wanted it. He knew that, by the time he’d arrive to the island, it would be a pleasant place to retire.

Amma then continued, tying the story back to our own lives and the preparations we should take for vacating the temporary housing of our body at death: “Similarly we should prepare ourselves. Whatever be the condition, our mind should be on God.” 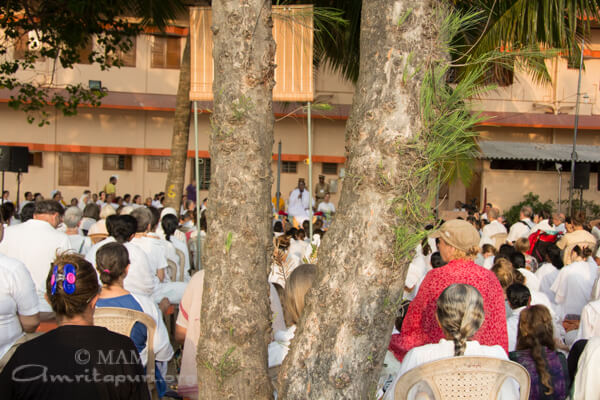 Desire is in the mind, Atma is beyond the mind

Directly returning to the devotee’s question regarding a life at sea, Amma continued:
“You say this desire is a vasana. If you are going after a vasana, it is like rowing a boat that is anchored to the shore. However hard you row, you will not reach the other side. You have to discard the “I” and “mine.” Pursuing a vasana, you will not gain anything, it is just a desire of the mind.

“I’m not condoning or condemning your desire to live on a boat. If your goal is Self-realization, then, wherever you are, whether you are in the middle of the ocean or not, your mind should be on God. The boat can be in the water, but the water cannot be in the boat. You are living in the world, but not let the world enter your mind. Wherever you are, you should make sure that other desires don’t seep into your mind.
“Desire is in the mind. Atma is beyond the mind. It is stillness; it is within. There, there are no desires. You will be like a small child: happy in every moment.” 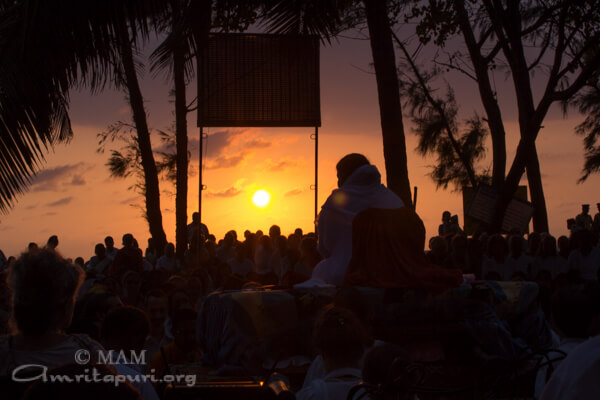 Amma then narrated the story of a competition in which a man would swim as far up a river and back as he could within 16 hours. Whatever the distance he covered in that time, he would be given the pearls in the riverbed within that length of the river. One man was determined, he swam as hard as he could for 12 hours without turning back. After 12 hours, he finally began to race back. He was so exhausted by the time he was approaching the finish line that he was coughing up blood, but those on the shore cheered him on, telling him how close he was. He crossed the finish line in just under 16 hours and immediately collapsed, dying there in the water. Though he won many pearls, he did not live long enough to enjoy the spoils of his victory. None of the people who were cheering for him went with him either.

Amma continued, relating the story to a life spent chasing vasanas, “If we are chasing after a vasana, then this is what life will be like.” She then returned to the devotee’s question about living at sea, “On the other hand, if you are committed to spiritual practice, you can still be in the ocean, you can meditate, you can realize God. You do as you like.”

What is there to gain with a Vasana? 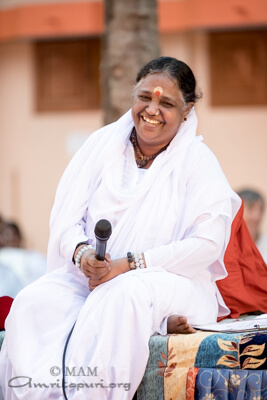 Amma then asked him a question: “What did you get by going to the sea? Isn’t it enough that you watch and enjoy the sea from the shore.? Is it necessary that you should sit on a boat to enjoy the sea? When you were in the ICU, you realized there was only God and you were calling out to Him, and when you came out, you left God and you are now chasing after the housefly. Like the bird on the dry twig, we should always be aware and alert. It may sit there, eat and sleep. Even a small wind comes, the bird will spread its wings ready to fly. This world is like a dry twig. Any time, it may break. Be ready to fly.”

Amma then chuckled softly and recounted that she had been drawing a picture of a boat as the answer was being translated to audience. She remarked that she had been thinking that this devotee might be reincarnated as a tree that would be cut down and planed into planks used to build a boat so that he might always be at sea.

Everyone shared a playful laugh before the humor died down. The soft rumble of waves could be heard in the background. With the ocean so close by, the question seemed to come to life. Though the gentle thundering of the sea may not have produced the same desire for others, all were aware that the temptations of their own minds were close at hand. In that sense, Amma’s advice was not for him alone, but for each and every person. It was a time for reflection: Do we want to follow the vasanas of the mind or the guidance of the Guru? The choice in Sanatana Dharma is always ours.