Amma’s visit to Jaipur fell on Holi {read more} , the festival associated with Sri Krishna, wherein powdered paints are thrown around, painting everyone with bright pinks, oranges, greens, reds and yellows. In fact, looking out at the people who came for Amma’s programme it was clear that some of them had already been celebrating. 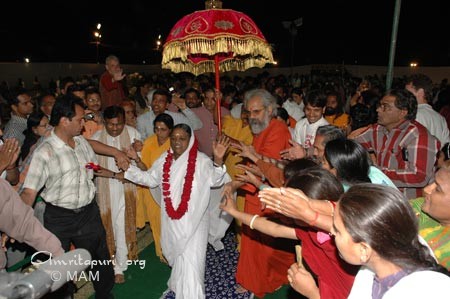 In the beginning of her satsang, Amma wished everyone a Happy Holi said, “Holi is a symbol of joy and celebration. May your life be filled with the colour of bliss. Once you apply the paints, everything looks the same. Similarly when you apply the paint of love to the mind, all differences disappear, we become one and we will be able to move ahead in unity. Holi reminds us about the greatness of faith. Prahlada was sitting on the lap of Holika, but the fire couldn’t harm him1. That was due to the unshakeable faith Prahlada had in the Lord. May my children’s faith be similarly formed. Amma prays to the Paramatman that this be so.”

The Honourable Chief Minister of Rajasthan, Smt. Vasundhara Raje, came to the programme to seek Amma’s blessings. After bowing at Amma’s feet, she took a seat on the dais to Amma’s right. 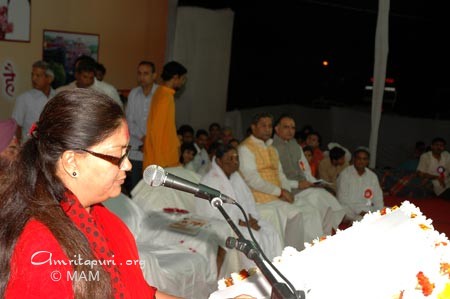 In her address, the Chief Minister said, “When someone came to me and said, ‘Mother will be coming here on the 14th, will you take some time out of your busy schedule?’ And I said, ‘I believe that I am very lucky that I will have the opportunity to come and pay my respects to Mother.’ The question of being busy just doesn’t arise! Because for people like us, blessings of people like this are very few and far between. And when you work towards keeping a family as large as that of Rajasthan, I can tell you that you need every blessing. So I believe I have that affection, I have that love, and I am happy with that. I believe that is what will see us through. It is the blessing of souls like this, it is the direction of souls like this, that take us and the state very, very much further.”

Sri. Ghana Shyam Tiwari, the Honourable Minister of Education of Rajasthan, also addressed the gathering. In his talk he said, “Amma is the representative of the spiritual shakti [power]. From Kerala, Shankaracharya travelled the width and breadth of India spreading his teachings of Sanatana Dharma. Today, Amma is doing this throughout the entire world.” He also told a story involving Sage Narada about the power of Mahatmas to alter one’s fate.

The CM also helped distribute certificates of enrolment into the Amrita Nidhi lifetime pension programme to a dozen or so widows and handicapped people in Jaipur. The new beneficiaries also received the first three-months installment of their pension. These people were representatives of 1000 new beneficiaries in the Jaipur area.

Sri. Ashok Parnami, the Mayor of Jaipur, was also present on the dais.

As part of her bhajan set, Amma sang, “Ayiye Holi Bhari Pichkari,” to the delight of all the devotees.

Around 12:30 a.m. a familiar face came for Amma’s darshan, Sri. Ram Singh Chauhan, the man with bragging rights to “The World’s Longest Moustache” who performed with a Rajasthani dance troupe for Amma at Amritavarsham50.

A Happy Holi to all.

*Prahalada was a devotee of Lord Vishnu. Prahlada’s father, the Demon King Hiranyakasippu, wanted Prahlada to worship him, not Lord Vishnu. When Prahlada refused, Hiranyakasippu tried to kill him in many ways. One such way was by putting him on the lap of his aunt Holika. Holika had a boon that made her impervious to fire. With Prahlada on her lap, she then jumped into a fire. But due to his unshakeable faith in Lord Vishnu, was Prahlada was not burned, and Holika was destroyed.