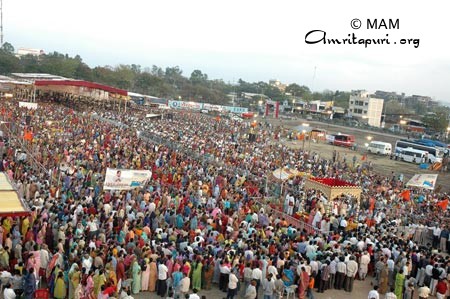 In fact, from the minute Amma reached the dais in Indore, politicians, reporters, policemen, men of industry, pensioners—not to mention thousands in the crowd—began struggling to make their way to Amma. To say it was difficult to manage would be an understatement. It was impossible. Then, when darshan officially began, thousands of others who had until then been waiting patiently also began pressing forward. Perhaps they did not know that one is supposed to come only when his token number is called. 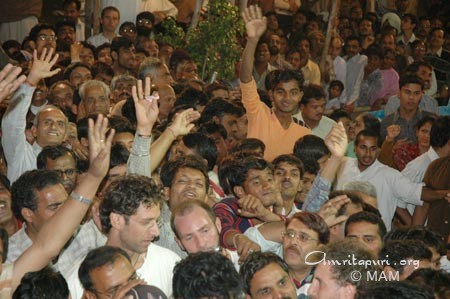 For the entire duration of darshan, the brahmacharis, brahmacharinis and devotees travelling with Amma had to police the boundaries of the stage to prevent the massive crowd from creating a stampede upon it. In fact, the situation was such that Amma’s satsang and bhajans were delayed for almost half an hour simply because no one would leave the stage. At one point during darshan, Amma herself stood up and spoke over the sound-system, telling everyone not to worry that she would give darshan to everyone but that they had to be patient and not push. “In 35 years of darshan, nothing like this has ever happened,” said one of the senior brahmacharis.

When darshan finished around 9:30 the next morning, many ashramites commented, “It clearly was only due to Amma’s sankalpa [resolve] that no one got hurt.”

On the way to Amma’s next program in Jaipur, Amma stopped in Kotta, Rajasthan and, sitting on the banks of Chambal River, a discussion about the Indore darshan ensued. Some of the devotees who had helped with crowd-control shared their feelings and experiences. One woman explained how at one point she had held onto a man’s shirt-collar to prevent him from walking on to the stage, only to suddenly find herself holding the shirt—minus the man! Amma, the swamis and everyone on the tour laughed. The whole night had been the kind of situation where either you laugh or you cry. Better to laugh.

“They had devotion but no knowledge,” Amma said referring to the people who rushed on to the stage. “There were 15,000 people crowding into spaces meant for 1,000. Amma could not stop thinking of their safety. I was afraid there could be a stampede. Also, what if someone in the crowd was a heart patient or suffered from high blood pressure? But by grace nothing bad happened.” 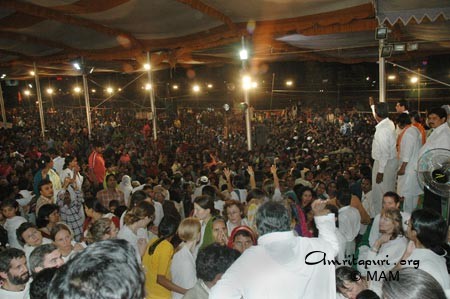 One man described to Amma how he literally spent 16 hours in the middle of the sea of people, trying to make sure only those with tokens came for darshan.

“To be honest, I don’t really like crowds or people to touch me,” said one young man from America. “But when someone said they really needed help with the crowd-control, I came. Initially I was a little scared, then I got angry that no one would listen, but finally I realized, it was all pointless and just Amma’s leela [play].” In the end, he said, he decided to simply do his duty without tension and enjoy the bhajans.

“I am not sure if they were childlike or childish,” Amma said, laughing. “But if there is a bag of chocolate in front of a group of children, there will be no discipline.”

Amma first stressed how the people doing crowd-control needed to have not only discipline but also compassion. She then gave some practical advice as to how try to make sure a similar situation doesn’t occur again in the future. 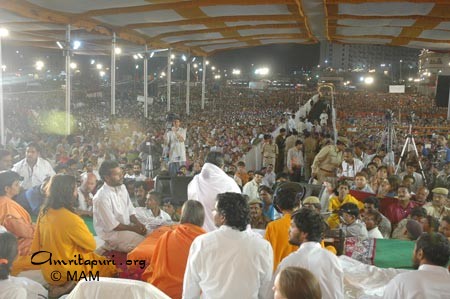 Amma told everyone that they must try to learn to from every experience in life. “We should never become slack, expecting all situations to be the same,” Amma said. “We cannot expect peace and safety in each place. Rama’s life was not like Krishna’s. Each situation is different.”

Towards the end of the Kotta stop, one brahmachari told Amma that he had a suggestion for the spiritual evolvement of the people who’d rushed the stage. “Amma, I feel the ideal path for them is that of devotion,” he said. “Just like the gopis of Vrindavan, they should spend their whole lives yearning for the Lord to return… but she never does.”

It was meant as a joke, and everyone including Amma laughed. But Amma felt otherwise: “Where there is darkness, they need more light. We should go there more often!”