Amma’s program in Durgapur was after few many years since the last program in 2004. The whole city seemed colored with posters announcing Amma’s arrival. Durgapur is one of the industrial cities of Indian state of West Bengal known for its steel industries. Amma had driven for more than 2 days from Delhi before reaching Durgapur. 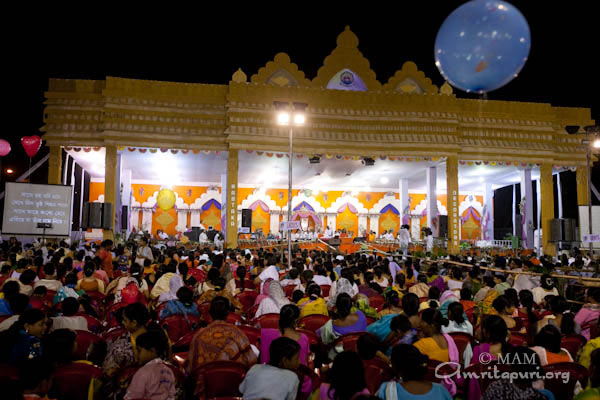 Amma was welcomed on the stage by ululation by devotees wearing tradition Bengali clothes. The public program started with the distribution of 50 Vidyamritam scholarships to poor students.

Amma’s satsang was translated into Bengali, the local language. Some steps of the Manasapuja Amma did in Bengali. Many bhajans were sung in Bengali too.

Amrita Vidyalayam students performed several cultural programs including dances, yoga shows and musical performances.
The Darshan went on until 4 am in the morning. Just before Amma got up from her seat, she sang some bhajans leaving the excited crowds almost dancing on their feet.