Amma and the tour group reached the Kolkata Brahmasthanam temple after a few hours drive from Durgapur. Immediately after the buses reached, Amma had called the whole tour group to the roof of the Kolkata Ashram building. Amma had set up huge pots to make rice batter and had started to roll rice flour for making kozhukkatta 1. Amma had expressed that she personally wanted to spend more time with her children, make food for them and see their smiles. 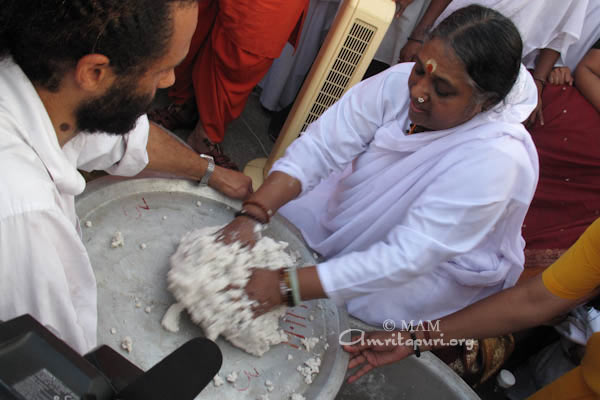 Soon the whole lot of around 500 people crowded around Amma. To catch glimpses of Amma, some crowded a shaky metal staircase that led to the top roof, many perched on the roof at various corners looking at Amma below, few others even hung on precariously to the supports built for clothes-strings that are used to hang wet clothes.

Amma used one large pot to put some flour and started kneading it with some water. She took some salt in her hands and after mixing it with water sprayed the water on the dough and then kneaded. Amma seemed very agile as she made the small balls of dough and almost all the balls were of similar dimensions. Amma took some jaggery added coconut scrapings and handing out a plate of the same indicated that others could help her filling the inside of the kozhukkatta with the sweet jaggery. To everyone who came forward to do the filling, Amma would ask “Did you wash your hands well?” Amma had made the balls and others were asked to fill in the jaggery inside. Many hands kept filling the jaggery into the kozhukkatta as Amma would roll out the rice balls.

kozhukkatta were made in batches. As each batch of kozhukkatta was being passed from Amma’s side, applauds were heard indicating the celebration. Although Amma spoke in jokes and there was laughter as the making process was on, Amma’s actions seemed a beautiful reminder of how one should effectively do action. Amma started counting the kozhukkattas made. Around 800 kozhukkattas were made in four batches. After counting that there would be sufficient, Amma started cleaning the dough pot. She started scrapping the little pieces that stuck on the plate, rolling them with her hands and then added water twice to remove small pieces stuck on the plate. Amma mentioned that while she was young, her mother Damayantiyamma, would tell her “It is not we who created the food, then what right do we have to waste it?” if even a single grain of rice would fall out during rice de-husking . Mentioning this, Amma cleaned remaining flour that was sticking to the utensil and rolled the last kozhukkatta ball.

Soon after, Amma cleaned her hands and started singing Bhajans to thrill everyone around. Swamis took a seat next to her, followed by musicians who squeezed in since no one wanted to move away from Amma. Local devotees too joined the celebration. Amma sang a few Bengali bhajans, one Malayalam bhajan and a fast Marathi ‘Ayi Bhavani’. As the tempo of ‘Ayi Bhavani’ increased, Amma started salutations “Mata Rani ki” and the whole crowd replied with a “Jai” and this went on for some time and then came many “Maha Kali ki”. As the song was getting on higher and higher, Amma started ululation that was followed by many who followed her doing the same. Amma chanted “Kali Kali Kali” to the joy of the whole crowd.

In this Kali-Ghat2, Amma wanted to sweeten the lifes of many children who had come to her in their own ways seeking peace and refuge. With Master’s Grace working on the dough representing our life, spirituality as the core jaggery, even our life becomes a joyful experience. Isn’t that what she wants to see?

1 kozhukkatta (also known as modakam) is a delicious sweet-dish made of rice flour with sweetened coconut-jaggery filling. It is known to be Lord Ganesha’s favourite food item.
2 Kali Ghat was the old name of Kolkata