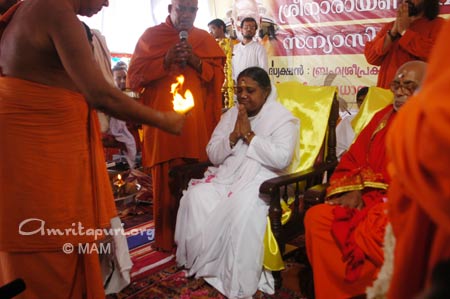 It was a historic moment. Addressing an all-India assembly of sannyasis at the Sivagiri Math of the Sri Narayana Guru Dharma Sangha in Varkkala, Amma expressed her vision of sannyasa dharma. “A real sannyasi is one who can remain content performing any action,” Amma told the gathering of several hundred sannyasis. “Atma samarpanam—Self surrender—is the secret to happiness. This means a sannyasi should be able to perform actions without attachment. Such non-attachment is only possible through surrender.

“A compassion-filled heart, the resultant readiness to sacrifice one’s comfort for the sake of others and the happiness that ensues from that sacrifice make a sannyasi’s actions unique and outstanding. Only a true sannyasi can bring about a real change in others.”

Amma then told everyone that when she says “sannyasi,” she is not limiting the term to those wearing ochre-coloured cloth. “Amma is referring to those with a sannyasi’s mind and vision—those who whole-heartedly desire peace and happiness for all beings in creation, those who are able to see the world as a flower, understanding every petal’s importance and beauty.”

Upon the conclusion of her talk, Amma was offered the traditional worship of a sannyasi—Yati Puja, her feet being reverently washed with pancha upachara. Afterwards, the same puja was offered to the congregation. It was the first time that Amma has officially been honoured as a sannyasi by sannyasins. 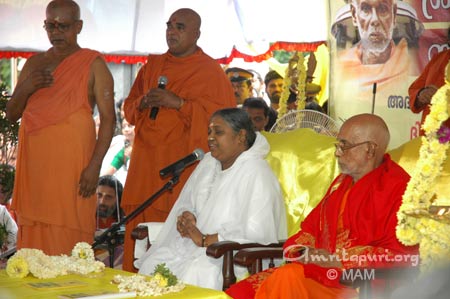 Swami Prakashananda, the president of the Sri Narayana Guru Dharma Sangha, also addressed the gathering, which was held as part of the Sangha’s celebration of the 75th anniversary of the Sangha’s Sivagiri Pilgrimage. In his talk, he reminisced about his first meeting with Amma, some 24 years before. “Even though this is Amma’s first official visit to Sivagiri, Amma came here years ago. I was standing in front of my hut when she walked past. She simply looked at me and smiled. Someone later told me that the lady in white had been Sri Mata Amritanandamayi Devi. I had heard about her before, but that was my first meeting. In front of Amma, I always feel like a child and she is the Mother of the world.

In her address, Amma also spoke about the greatness of Sri Narayana Guru, a great master who transformed Kerala at a time when it was falling plague to social malpractices in the name of caste. “When we see the untruth as truth and adharma as dharma, social life falls astray,” said Amma. “Gurudevan is a mahatma who saved an entire society that was starting to drift off course.”

Amma said that the Sri Narayana Guru’s power came from his detachment. “Because of this, he was able to start a spiritual revolution that initiated the purification and transformation of society. Only karma yogis like him can bring about a real change in society.”

Addressing the sannyasis, Amma said, “Power and position are the voice of the ego. There, not love but selfishness rules. In ego, there is no detachment, only attachment. When we perform actions without differentiating between people and seeing the goodness in one and all—that is when real change takes place. Selfless love should be the inspiring force behind action.

“There is nothing here except God—this is the truth. Therefore, how can one label some as low and others as high? If God is everything, can anything be called ‘higher’ and ‘lower’? Everything is the embodiment of the Atma, the supreme consciousness. As such, everyone is the ultimate. This was Gurudevan’s vision.” 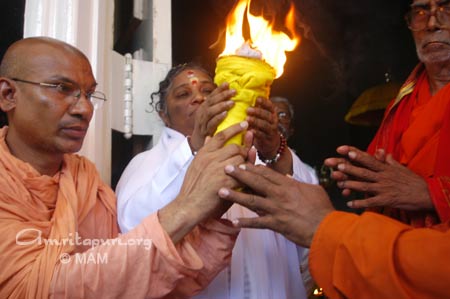 Amma concluded her talk by stressing the importance of rooting action in spirituality. “Spirituality should be the foundation for the realm of action,” Amma said. “Only then will transformation take place. Only then will the awareness of people expand.”

“‘In the three worlds I have nothing to obtain, yet I perform actions.’ We know these words of Sri Krishna to Arjuna in the Bhagavad-Gita. Actions done without the expectation of results and with the spirit of surrender lead one to realize their union with God. That is the goal of karma yoga. Efficacy in action is being able to perform actions without attachment. To lead people and maintain social rules, position and power are needed. But we should learn to use them without attachment.”

When the function concluded, Amma offered her blessing to the eternal flame lit at the time of Sri Narayana Guru’s samadhi in Sivagiri in 1928. This flame is now being carried throughout the cities, towns and villages of Kerala by the Sri Narayana Guru Dharma Sangha.