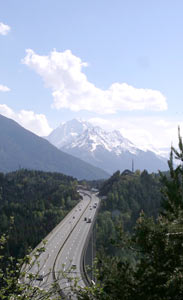 Amma has been travelling across Europe annually for 22 years now. But until this week, she had never made a road stop with the devotees accompanying her on the tour as she regularly does during her India tours. It was during the 500-km trip from Munich to Milano, that Amma asked the tour coordinators to find a suitable place for her and the 160 tour-staff members to spend some time together. The chosen spot was along the Brenner Pass in Austria, an ancient trade route through the Alps, connecting the Southern Alp areas of Northern Italy and the Northern Alp areas of Germany, Switzerland and Austria.

When the buses arrived, Amma was already there waiting. Amma’s devotees and disciples climbed up the hill to where Amma was sitting. The panorama was breathtaking—a 360-degree view of the Alps, with several villages visible in the valleys below. “Look at this beautiful view. But when enjoying the beauty of the creation, we should remember the Creator,” Amma said. She then began to pass out sweet biscuits to everyone as prasad.

Suddenly, from behind Amma came the cry of “Amme!” with a slightly French accent. Nathesh, a young French boy, was coming down the hill carrying a large handful of snow, which he then presented to Amma. Before anyone knew it, Amma had made several snowballs and was firing them with perfect accuracy at various devotees and disciples.

After singing a few bhajans in Italian, Amma closed her eyes in meditation. When she opened them, she began speaking about the importance of chanting one’s mantra while travelling on a spiritual pilgrimage.

“While traveling on the bus, you should always chant your mantra,” Amma told the group. “Chant as much as possible. Even if you fall asleep, when you wake up resume your chanting the moment you awaken. If you forget, just start again when you remember. Our intensity for God should always increase. Imagine that you owned a precious diamond and lost it. After that, whatever you’re doing—walking, talking, traveling—in all of your actions, you will always be thinking of the diamond and how to find it. In the same way, we should intensely remember God. We may fall asleep, but if we always resume our chanting upon remembering, slowly the gaps of forgetfulness will be bridged. We should be like a person sitting in a glass box. The person may look outside and enjoy the sights, but he always remain separate in his box. Likewise, on the bus we can look at the beautiful nature outside, but we should try to see our Beloved Deity in all of this. We can enjoy everything, but always remember and be focused on God. We should try to see Creator in creation.”