The crowd that comes to see Amma in the Gujarat capital wears some of the most colorful fabrics on this Bharata Yatra. Big white turbans and brightly painted dresses show a proud people — the tradition of India’s many cultures is evident. Amma arrived just after sunset. The car drove to the lotus shaped mandapam where the devotees were ready to garland Her and to perform the pada puja to welcome Amma. 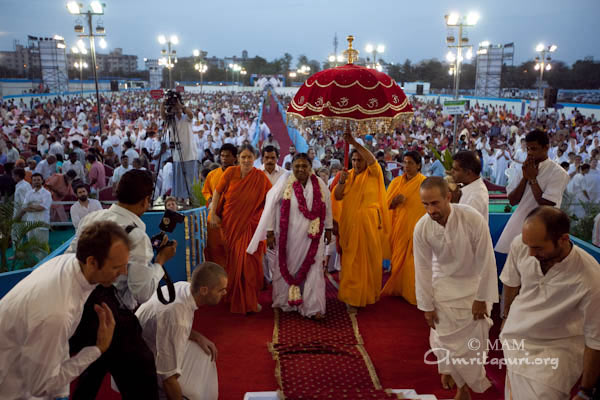 The backdrop on the stage captured elements of the Amritapuri temple giving the simple message that Amma’s temple is everywhere and that it is up to us to build our own Amritapuri wherever we are.

The mayor of Amdavad, Mr Kanaji Thakore, welcomed Amma to Amdavad recalling the vast relief effort and rehabilitation in the Bhuj area in this state after the devastating earthquake of 2001.

The benefactors of the three villages that Amma rebuilt also came to the program. The men wore traditional white pants and turbans, and the women wore black dresses with colorful patchwork, displaying their traditional outlook on life. These proud people have come to see Amma in Amdavad ever since they met her during the relief operation. For them she is their savior, the amazing Hindu who built them new houses and a mosques after they had been destroyed.

Amma distributed scholarships to 100 poor students of the city. Together with Kanaji Thakore, senior IAS officers from the state government including K Kailashnathan, RM Patel, and Anuradha Mall were present at the function. Three Gujarati books based on Amma’s address were released at the function.

The Amrita Vidyalayam school that opened here in 2002 has grown fast and is now hosting 1500 children and students in 11 standards. They come from all kind of backgrounds and classes. The children performed traditional and modern dances during the program representing the great culture of India, starting off with a young boy doing a classical Bharata Natyam dance representing Lord Krishna. Next a group danced on Amma’s desire “Everyone in the world should sleep without fear…” Rajastani traditional dance followed by Punjabi Bhangara dance, Goanese carnival, and Kalbelia tribal dance showed off the talents of the children in colorful performances.

As the night wore on and morning came, Amma kept giving her loving darshan to all who came. At the end of the program the teachers and the devotees started singing and dancing on the stage in ‘Garbha’ – the traditional Gujarati style of dance. It was daylight and almost seven in the morning when Amma took the microphone and started singing ‘Meeti Madhuree’, an enchanting song about Krishna. The devotees clapped and danced while Amma sang.