During the two days of the brahmastanam temple festival in Nerul, New Mumbai, large numbers of devotees flocked to the ashram to receive Amma’s darshan and participate in the satsang, bhajans, dhyan and special puja led by Amma. 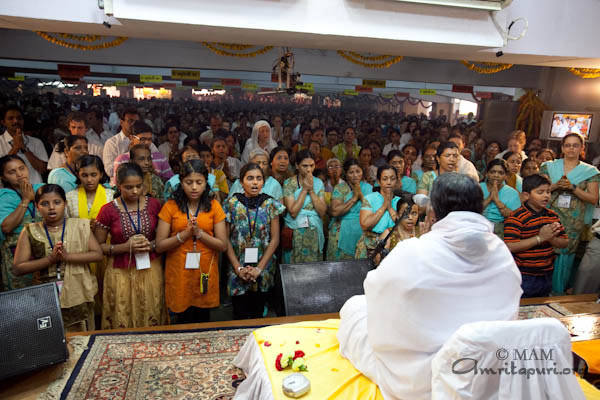 One important factor for the great success of the Nerul programme was the large number of AYUDH volunteers who helped out in nearly every area of the programme. Over 100 youngsters worked day and night in the chappal stall, dish washing, recycling, puja setup and crowd control. In order to make Amma’s programme more eco-friendly, the youth banned the use of all plastic bags in the chappal stall, saving at least 5,000 bags from being wasted.  Instead, they provided reusable eco-friendly cloth bags.
Also the trash management was run by the youngsters. They separated the trash and used all food waste to create organic manure which soon will be utilized in the ashram’s garden.

As it was the day of Holi, everyone was eagerly waiting for the moment when Amma would start the play.  At the end of the last programme, the devotees brought a pichkari (water pistol) to Amma so that she could spray everyone with coloured water. With a mischievous smile, Amma charged the water pistol again and again to create maximum impact all around her.

The celebration was ignited by Amma singing three bhajans, amongst them “Mata Rani.” The music was accompanied by a djembe, an African drum, which gave the songs an extra punch. Even though the Nerul stage is very small, the devotees used every inch of space around Amma to get a glimpse of her playing the game. Everyone’s faces lit up with the colours of joy, exhileration and amazement while watching Amma in this wonderful mood. Endlessly, the devotees kept on shouting “Mata Rani Ki Jai.”
Even after Amma left the stage no one seemed tired. The devotees continued to throw coloured powder around until the whole ashram and all those staying there were covered in all shades of the rainbow.
Happy Holi to all.